Similar to triple ko, a quadruple ko involves four kos on the board that are all in play at the same time. Often they are part of the same configuration, as in this example. 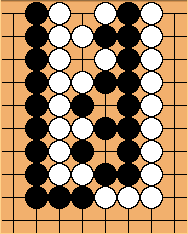 A double ko and two separate kos can also form a quadruple ko.

A quadruple ko may lead to a game ending in no result if neither player is willing to back down from the ko fight, though some modern rulesets handle it with the superko rule.