The following positions recently came up in one of TakeNGive's games, and he is curious how this DoubleKo would have been affected by the Ing Ko Rules. Could some sensei or sempai please expound? 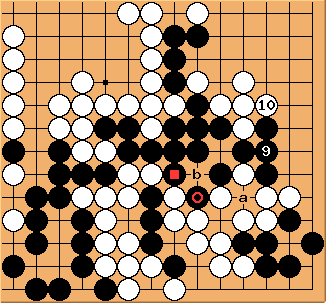 After the White 240, Black played 241 at a. This was the first capture in this area in several dozen moves. (Previously, at move 195, Black had played the squared stone, capturing a White at b. But the board was very different then, so I'm sure this would not affect the current status of the kos.)

White then played move 242 at b, capturing the other ko (marked with a circle). 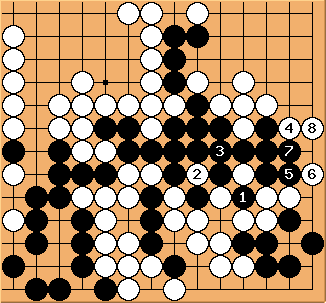 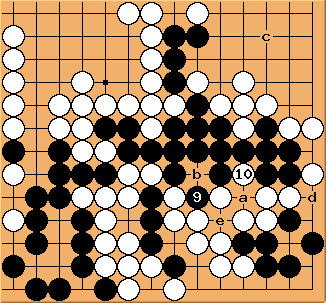 Which parts (if any) of this sequence are not legal under Ing rules? Would the status have been different if Black had fought the double ko right away, and not tried to run to the edge with 243 etc.? Thanks for any enlightenment. - TakeNGive

HowToLose?: It seems at this point that this is a picnic ko for W...at some point, B must run out of threats, and White can take one of the kos. As for your question, I don't understand how Ing rules work myself, so unfortunately, I can't help you there.

BobWhoosta: Considering the double ko, and the number of liberties for the "not yet alive" group, as well as the living status of white's other group, these stones are just dead. A play for white might be at c to bring life to his group on the top right, thereby making it so he doesn't even need to play to capture the stones at the end of the game. They will just be taken off the board. (Note that c is smallish, and therefore yose, because the white stones are alive without it, so you don't need to play this if you are okay with black possibly getting forcing moves in the area). Also note that it would be prudent to play at d in order to stop white from the possibility of some shenanigans if you can't read it out. I honestly think there is no danger there, but my sense of danger has been described as "tarp as a shack".