We can try to translate the Japanese term choshi as: A play that attempts to generate positive momentum.

In Chinese the term 调子 (diàozi) is also used [2]. It seems to be more or less equivalent to choshi in the context of Go. 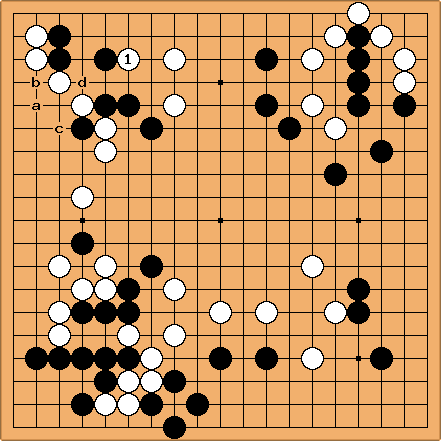 Black can create aji by playing A, White B, Black C. Splitting White this way would give Black forcing moves as White attempts to stabilize his corner group. Therefore, White attaches at

in hope that Black D, then White A -- having Black help White stabilize the corner weakness more actively.

tderz: This sounds as if

in dia. 7 on page 15 of in Go Seigen' "A Way of Play for the 21st Century" is also choshi, because it induces the black "kuruma no ato-oshi" (= 'pushing from behind', Almanac 2001; usually a bad strategy). Here comes my question:

I just see that inducing is mentioned one line below. Sorry, if I thus repeat s.th. . The driving tesuji is also an inducing technique for coming out, hence both ex. are inducing.

Prime examples of such play are the driving tesuji and inducing move.

The reason this is good is that, if you made the play you wanted to make right away, your opponent might not respond to your original play. You gain by making your first play or plays sente.

Another example of this idea is Play Kikashi before Living.

But I became aware that the term has a broader meaning, which I have had trouble pinning down. Ordinary translation does not help much, yielding words like rhythm and tone. Now I think maybe

Bob McGuigan: The word has also been used in describing probe-like moves: choshi o miru. I like momentum, and sometimes it seems that flow has something to do with it. Also, though it's not very precise, I think there is something to be said for rhythm.

Bob Myers: Bob, could I trouble you to provide an example of choshi wo miru since I don't recall hearing that expression.

Choshi ga ii, or good choshi is generic Japanese which can also be applied to go, and translates as something likefiring on all cylinders, in the groove. The opposite, choshi ga warui, or bad choshi, has the expected meaning, which is that things are just not coming together.

John F. This latter meaning I have usually rendered as on good/bad form, or in form - usages from the sports world. Is this not an American idiom? (I too have not come across choshi wo miru, I think, though if I did I'd expect it to have the meaning Bob mentions.)

Bob McGuigan: Unfortunately I don't have an example immediately. It was in a game commentary, though, and since lately I've been looking at the games in Taizen Chitoku by Yoda maybe it was from one of them. Anyhow that's where I'll look first.

John F. I was musing on this page on the way to work this morning, and a couple of things came to me. One was that I've heard choshi (actually choushi) described as a 5-dan skill. The other was a realisation that I don't think I've ever seen a Japanese tap his foot to a rhythm. I'm sure it happens - maybe I'll find out when I go to my first Kodo performance next month - but very often Japanese have their feet tucked under them. When a rhythm strikes up, they will start clapping very energetically. I suspect they associate choshi/rhythm with very energetic activity. In contrast, in the west, I have a feeling that for many people rhythm is seen as simply signifying something metronomic, regular, insistent. If that's how you see it, don't use rhythm for choshi. I also recalled that I've used impetus, and another way of looking at it is that a choshi move creates a cascade effect[2].

Bob McGuigan: According to the Harvard Dictionary of Music, rhythm is, in its primary sense, the whole feeling of movement in music. That's the way I was thinking of it in regard to Choushi but I certainly see that a metronomic regularity is not what is meant in go. What about the phrase "flow of the stones"[1], John? Do you see that as related to choushi?

(Sebastian:) I like "impetus", because it contains the idea of antagonistic forces, rather than the linear superposition understood by "momentum". Also, it's less overused and thus lends itself better to a well defined term.

John F. Bob, I think "flow" is preempted by other usages, and also applies to both players in some sort of harmony, whereas choshi refers to a tactic initiated by one player to control the other. Also, Sebastian's point about avoiding overloaded terms is right. As I was typing this I was watching the news on TV and that brought a silly-but-maybe-not-so-silly phrase into my head: a traffic-regulating move.

urusainaa Choshi is hard to translate. It's not only a go term. chosi dou? Means how are you feeling. choshi warui means I'm sick. Choshi ii means I'm going good/ well. Choshi wo noruna is a warning "don't push your luck/lit? don't ride your choshi]." Choshi in a game of go must mean the same kind of thing, i.e. choshi ii would (in go) presumably mean, the game is going well for sid player, or if used about a player, s/he is winning a large amount of games/playing well.

tchan001 I was looking up 调子 on google trying to figure out what it means and I came up with a chinese explanation which I have tried to translate loosely below:

At times if you play certain moves directly, they are no good. You can however make use of the opponent's stones to help you play the moves you want to make. The essence of this being to borrow strength to effect strength.

epte I notice in the example above that one of the important points in the explanation is the removal of opponent's aji. Does choshi always involve aji keshi of opponent's aji? If so, is that a defining characteristic, or only incidental?

[1] The two characters have several readings so I (Malcolm) wasn't sure about the reading of this term. But I asked two Chinese Go players and they both confirmed this reading.

[2] Malcolm The term is used in Chinese, as attested by this

question on baidu, asking for an explanation of the term. In the answer to the question they note how the meaning of this term is hard to explain. It seems to be the entry referred to by tchan001 above?; I think his loose translation is very good.

Dictionaries tell us that the Chinese / Putonghua / Mandarin word 調子 has a few meanings and can be translated as: tune; melody; tuning; cadence; intonation; (speech) tone; (musical) mode ...