Here is a position from one of my games, with the last 10 moves marked out. I played Black. 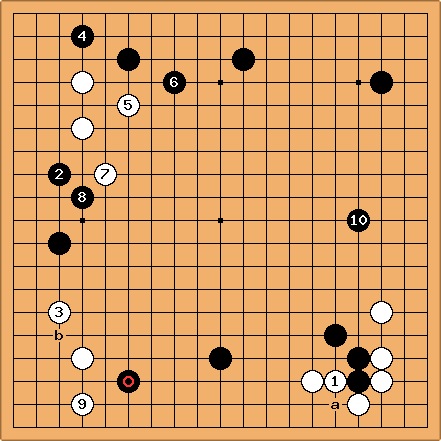 My question is how to analyze the board, and what areas to be watching, where should I be on the guard for a reduction etc. As well as just in general, what the overall situation is with regard to who is ahead? My initial impression was that I was way ahead at this point, but I'm not really sure if I analyzed it correctly.

unkx80: I have no idea of the black move before White 1, but I think whatever the move, playing at a is too big.

BlueWyvern: If you are curious about the previous sequence, check it out here: PreBQM32

You know, Black 2 is a good play. But after allowing White 1, I hate to see White make a strong corner in the bottom left. I would like to put some pressure on White's stone there right away.
The double kakari at 3 comes to mind, but White can play at b, making Black a bit overconcentrated. And the 3-3 invasion looks like it will weaken the marked black stone.
Somehow I want to play here: 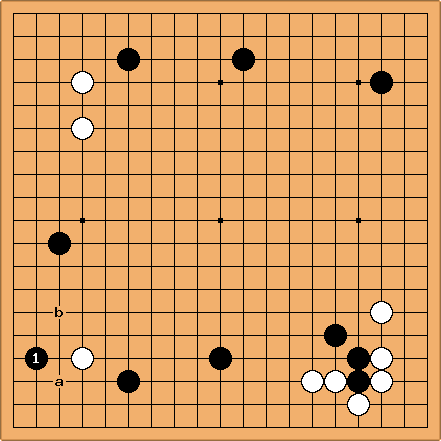 Is Black 1 a reasonable play? Is it a hamete? Is it just another one of my brainstorms?

Little Question Mark: If Black plays against this corner, where should he play? 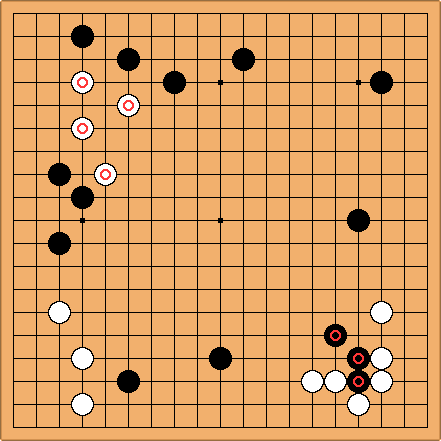 DaveSigaty: Blue, you asked how to evaluate this position. Let's see if we can survey the scene area by area: 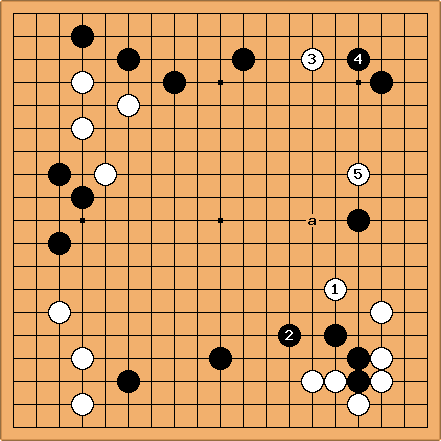 These are the next five moves, and this is where I stop feeling like the moves are flowing nicely. In the game I played at a, but I had a feeling that was the wrong way to play. Incidentally I went on to lose this game by 1.5 moku. --BlueWyvern

I think that Black 2 is heavy. 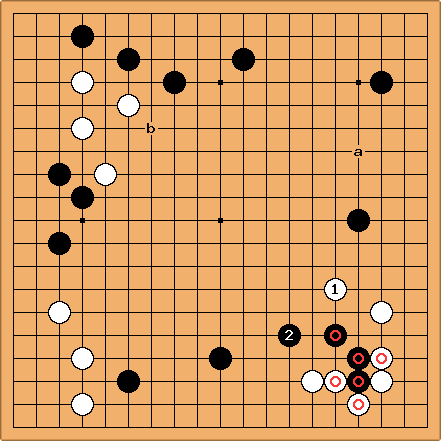 Considering that the black stones in the bottom right corner are matched by three white stones (all marked), you can see that White's moyo there is small potatoes. Running with Black 2 is not urgent, and gives White a target. Better to play somewhere like a, establishing a base on the right side and deepening Black's own moyo. Even better, I think, is to enlarge Black's moyo while attacking White's floating stones with a play like b. Maintain sente, and then go back and play at a. :-)

Later in the continuation diagram, the jump to Black a is not bad, but you might consider this kind of development. 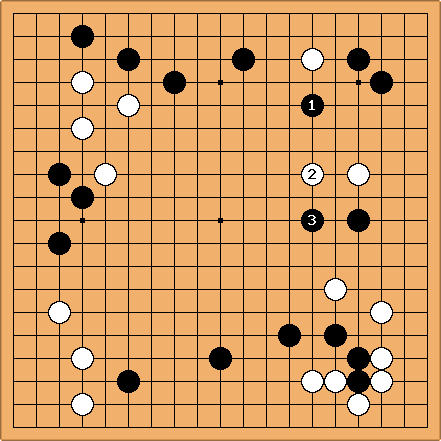 splits White's stones, attacking both. If

becomes urgent. Black's idea is to make a good play (

) better. This is an inducing move (called choshi in Japanese). Make your opponent make you make the play you want to make. :-)

does not look so great. How about something like this? 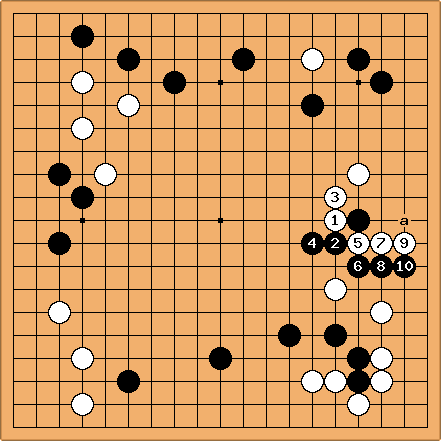 DaveSigaty: Wouldn't White prefer to play a instead of

here? Going back to

in the next diagram seems very slow.

is played with an eye to the exchange,

in the following diagram (ii), and to the fact that, after

in diagram (ii) makes an empty triangle. But if White plans to play as in diagram (iii), the diagonal is indeed better than the descent. :-) 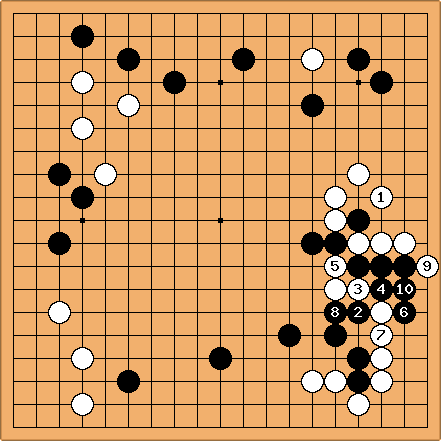 As usual with contact fights, both sides are strengthened. That looks better for White than mutual running. :-) 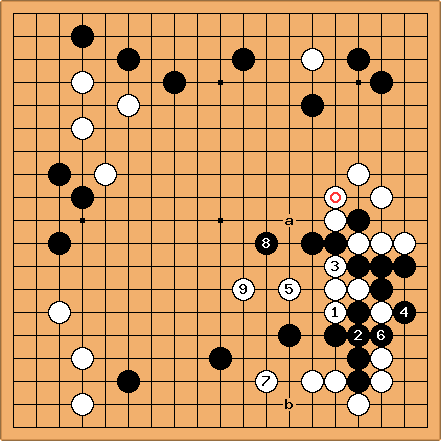 (Actually, in line with Dave's comments above, if White plans to play this way, she will not play descent on the right side, and the position will look like this:) 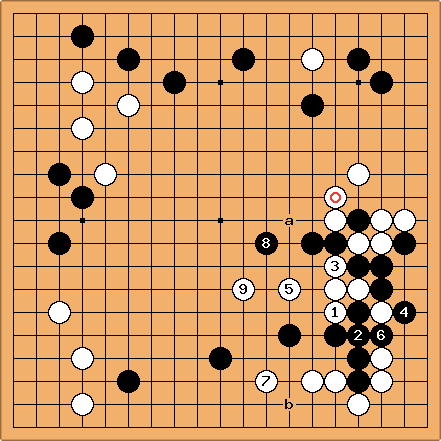 Now it looks like Black's early nobi is a mistake. <sigh> How's this (ia)?

, won't White at a capture the two black stones outright? Because the marked stone is there for support, Black can't force his way out.

Bill: Yes, but then Black b looks severe to me. So I thought

Dave: Yes, I think you are right. After Black captures with

the center white stones look pretty pointless; but then

seems to have little or no meaning.

Bill: Well, I was looking to Black's center stones and his weakness in the bottom left. But maybe White's center stones are too weak, especially considering White's weak group in the top left. 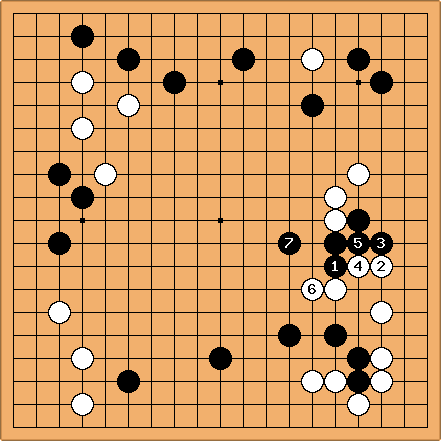 Black suffers a little bad shape, but keeps up the pressure on White. :-) What do you call

Of course, White can still cut. 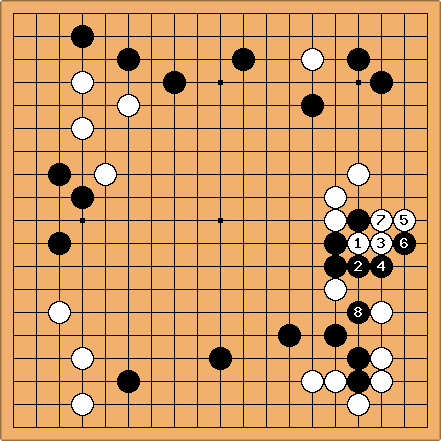 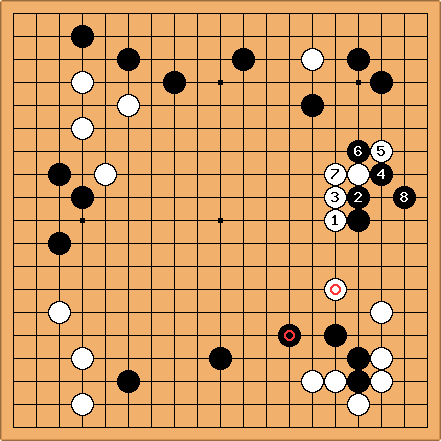 ? After the marked stone has been played, the original black stone has more the feeling of an invasion than an attack. I think Black can be satisfied to reduce the side and escape. This reduces the value of the marked stone.

Bill: Dave, what are your thoughts if White stubbornly plays nidanbane at

? White threatens to get pretty thick.

Dave: My original thought was the

combo shown. However, I agree that White will end up thick in the outside. It is difficult to make something reasonable here. It shows the damage caused by exchanging the two marked stones since the black stone can not contribute anything to the situation. 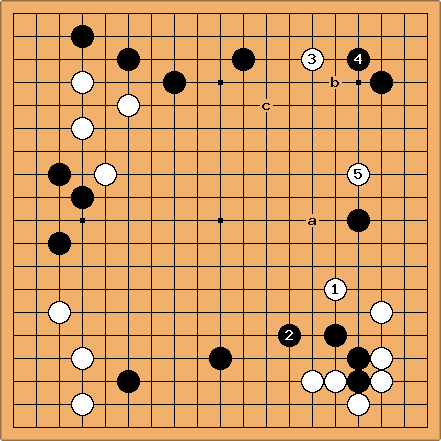 It seems to me that the analysis shows that pehaps

was a wrong decision. White is thick at the bottom so Black can do better connecting his stones and supporting a stone that faces white's thickness. This gives White the possibility to settle in the corner, but Black will get thickness.

DaveSigaty: I still feel the main issue is

. This should be played in the top right at a or one space above

in the diagram below).

is actually the wrong approach, I believe, and

is just the move to punish it.

has no room to move after

. I think this should have been at b or even something lighter like c. 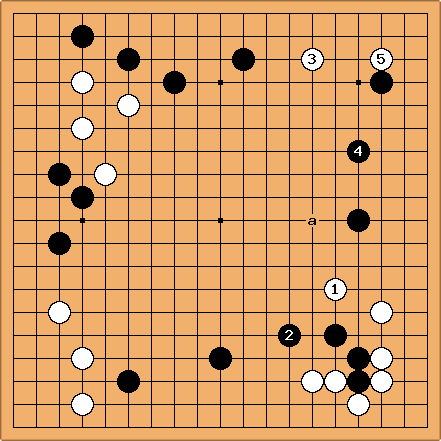 Dave: I think that if White gets the chance to play something like

she is well off in this game. She is going to end up with only one weak group (upper left) and Black looks like he will have a hard time competing on territory.