Bill: Is this really a proverb? It sounds to me like something cooked up by an amateur. While there are certainly cases where you want to play your kikashi before making life, on the whole isn't this a recipe for aji keshi?

(Aside: aLegendWai: Does it really matter? Trust it if you feel it is reasonable. Don't trust you feel if it is faulty. [My silly ideas though. Don't get heated!])

unkx80: I heard of such ideas from Chinese professionals, so I do not think this is exactly something cooked up by an amateur. However, I do not think the example given in the main page reflects the saying well. 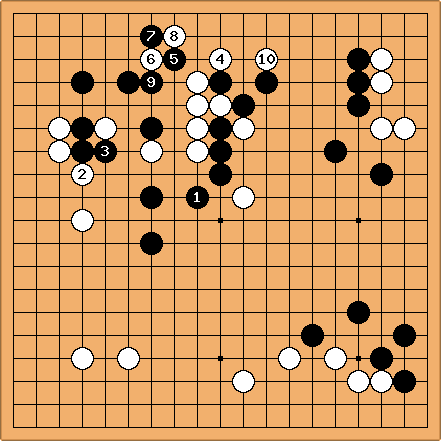 as kikashi before living? 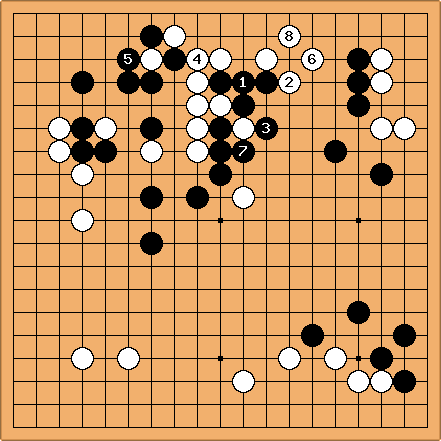 Bill: Well, I am pretty sure that's the kind of thing whoever came up with the saying had in mind. It falls under the general heading of choshi, I would say. Force you to force me to do what I want to do.

There are also plays that are sente before you make life, but become gote afterwards. As a rule you need to play those first.

probably falls into that category, as well.

My problem with this saying is that, if you already know these things, then you can see what it is about, but if you do not, then you get the wrong idea. That's different from proverbs having exceptions, or needing some explanation.

Bob McGuigan: I think the intention of the saying is that if you have to play a gote move to make life then you should create as much future potential (such as cutting points) as reasonably possible before taking the gote move. Also, as Bill said, some moves may be forcing (sente) before the gote move for life is played but not after. Does that make sense?