Quick couple of questions about a joseki. 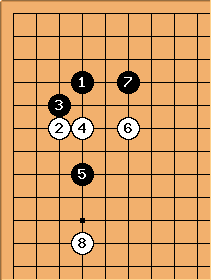 the attach tesuji usually used when there is a black stone in the centre which can support this, however in this case there is not. Logic dictates that these 'bad move' ( 3 isn't good without a pinceer and 5 fails to defend the black right side)should give white the advantage however, I've racked my brains trying to come up with a solution fow white, any ideas?

(if black does not answer at

, but plays at or around

, white can strongly attack the corner and get a good position along the top).
If we look at this with Tewari analysis: Suppose after

, black played the normal move at

. Then if white played

, would you invade at