The phrase capture two, recapture one describes the sequence below. Note that this is not a ko. 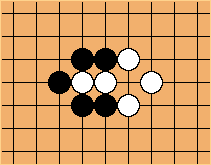 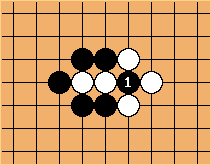 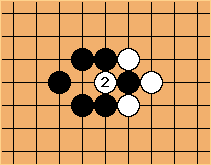 is a legal move even if played immediately after

Also, this sequence gives no eye to Black.

The position (Dia. 1) is a 1 point ambiguous endgame. The value and timing is similar to that of ordinary gote endgames with 2 point swing.

There are three possible lines of play:

After black captures (Dia. 2), the position has a count of 2 (the average score of the two possible continuations). This means, the initial move and the follow-up (in case black moves first) both have a value of 1 point.

Depending on who plays first, the total number of 1 point endgames on the board changes. This can be used to get Tedomari, as demonstrated in this

In terms of endgame, the following position is equivalent to "Capture two, recapture one" (Dia. 1).

"Capture two, recapture one" in life and death situations

There are a lot of situations where this sequence is a possible variation, the consequences of which are easily overlooked. An example: 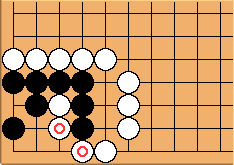 Black to live. The combination of the marked shape with the 1-2 point is very common in life and death problems. Yet our desire to atari may overcome us: 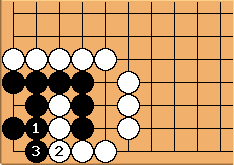 This is a line easily visualized and often played by both players if they fail to see the meaning of this shape. 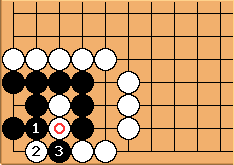 and recaptures a stone with 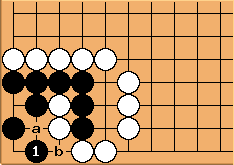 at a due to shortage of liberties. If White next b, Black a gives life.