unkx80: Until you pointed out that there is a difference between the two, I did not realise there is one. May I ask whether the difference is that in sending two, returning one, the player whose two stones are captured must have deliberately played a self-atari move that caused the two stones to be captured?

Bill: As I understand it, yes. In the English phrase, one player sends two stones, giving them to the opponent, and then the opponent returns one stone in exchange. 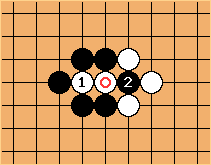 OC, such play would be ridiculous here. ;-)

My sense of the Chinese phrase is that same player takes two stones and then returns one. Is that right?

unkx80: Thanks. And yes, the Chinese phrase takes the meaning of the more general capture two, recapture one phrase.

I'll fix this mess tomorrow, if not, the day after tomorrow.