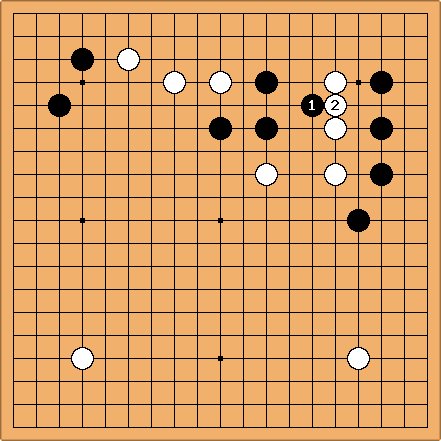 I have seen this kind of pattern played by high ranked players quite often. Why is the peep at

better than the cut at

? It is probably related to don't try to cut the one-point jump, but this move forces White to connect, which is what he expected in the first place, isn't it somewhat a thank you move? Why doesn't a cut put more pressure on White? And my last related question, what could be the best White answer to a black cut at 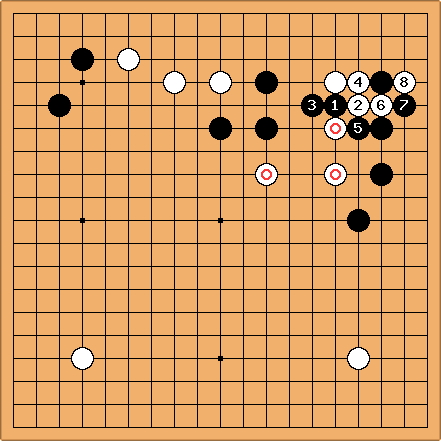 is played with the intention of cutting with

, it drives White into the corner - which White anyway is happy to take over. In return Black gets some chance of an attack against the

stones. At this stage of the game this appears to be a clear loss.

Andre Engels: There is also the point that there are 4 ways to answer the cut: White can atari at either side, and then connect on either side. For the cut to be good, Black should have a good result in all 4 ways. Here things seems almost the opposite. Charles' sequence is probably best, but at least two of the others aren't bad either: 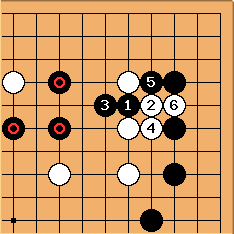 This one is not good for White. She does break into the right side, but Black gets a good amount of territory and the marked stones are safe now. 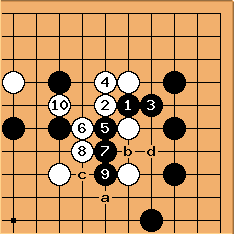 Black captures two white stones, but the amount of territory he gets this way is surprisingly small. Given that White can play white a to black d in sente it isn't more than 6 points or so. At the same time, Black's stones on the top are considerably weakened. This result is terrible for Black. 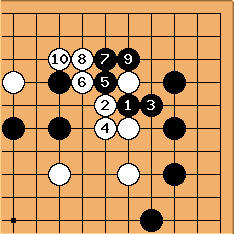 In this variation Black again takes a modest amount of territory (although some more as above, since the corner is secure now), but again his stones are weakened severely.