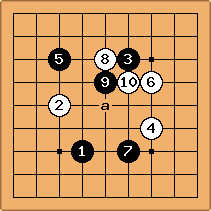 . But, I decided to avoid center area...

was probably the biggest move.

This is probably too aggressive, but let's see what happens

I accept the challenge. 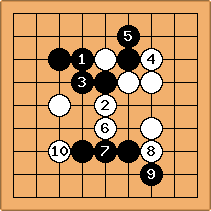 at last someone plays on tengen.

I don't want White to come in, so I build a wall instead of taking a hostage. [1]

Let's go around the wall, then!

Oh, that one is closed, too!

Where can I go? There's no place for me in this small world! I'm running amok! 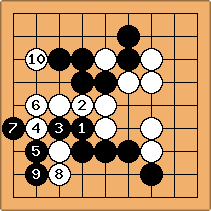 At least I don't have to think now. At least that's what I think.[2] 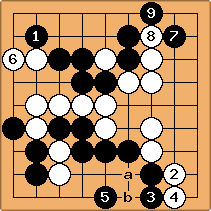 I want to defend that corner.

Then I'll take the other one

No, this is mine!

Let's play quickly before you learn too much :-P

It may be too ambitious, but I want sente.

I resign. I don't see how I could pull this off. You already had more territory before you called my bluff with

. I am a bit tired to comment precisely on this, but please see Add a second stone and sacrifice both for more information. 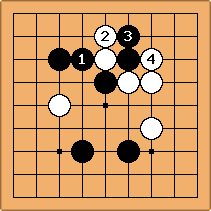 ? D o you mean, White should have extended the stone in atari like this?

You surely can't mean that you dislike

- they are similar to the proverb in that they extend a single stone - and they even save it. 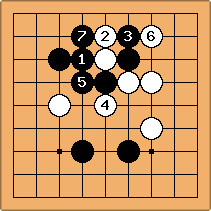 unkx80: The correct sequence for White should be in this diagram, which fully utilizes all the aji. Of course,

I added some elaborations to Add a second stone and sacrifice both, perhaps that might help. =) 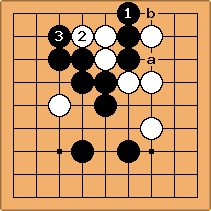 (Sebastian:) Thanks, I see what you mean. I wonder if Black can instead of

play like this, which give him good follow-ups at a and b.

. White would play at b and black would be forced to play at 2, then white plays a and closes in sente. Black gains nothing. If black plays 7 in the previos diagram, he can push once later at a, and if white plays a forcing black to capture, there is a yose at the edge left.

[2] Think again. -- Bill
(Sebastian:) Too late now. Seriously, is there anything important I didn't see? Please let me know or give me at least a hint.

Bill: Well, besides the general notion that you should not play without thinking, I thought that was a hint. ;-) If you do not play

, where do you play? What's important? (This is not to say that

is not best, although that was my first impression. :-)) 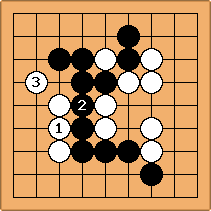 is what I had in mind. If

is elsewhere, White is clearly better off than in the game. Each corner play is big, now, but I think

is best. Since Black is connected, White is the one who has to worry about life and death instead of Black, as in the game.

[3] (DosGatos) Later I read ProtectingTheCutExample1 and learned I should have played at a. : ( Though I don't think it would affect my territory in this case.
(Sebastian:) Please feel free to undo. (To be honest, I've done that already a couple of times!) I play much rather with the agreement that, as long as the opponent hasnt' replied, we can still change our moves. As a side effect, this also works as an encouragement to move quickly. In the unlikely event that the undo was because of a Kibitz's comment to that particular move, we'll ask the opponent. Sounds good?
(DosGatos) OK. Thanks!

is not White's sente. In fact, 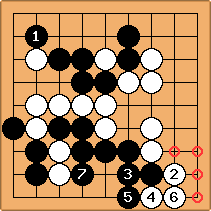 DosGatos: Do you mean Black would get a sente in this way?

Bill: Thanks, unkx80. :-) I was referring to the diagram above, as I think I have now made clear. In this diagram, Black's local reply to

. Also, with this sequence it looks like Black needs

to keep White from playing there.

To address Dos Gatos's question, after

in this diagram, the next play looks relatively small. Later,

is sente, and we expect that Black will be able to get it in with sente. Then, instead of the four

points, White will get only one, which is three points better for Black.

BTW, this is a very interesting position. Maybe I was wrong about it's being Black's sente after 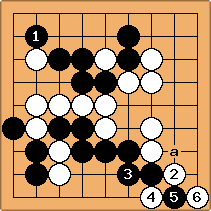 DosGatos: I still don't get it (I am a beginner!). Black should come this way?

takes away a White liberty so that White will eventually have to protect against a Black play at a. (Assuming White does not capture Black's group. ;-) This is a tricky position.)