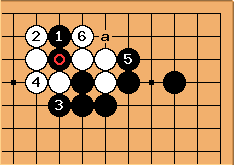 What is the point of black playing at a when white can capture that stone later? Let's discuss:

More on the effect on thecorner 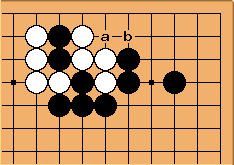 Let's look at three options. a, b and tenuki. 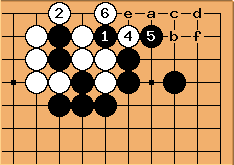 ends in gote. Later there is the alphabetized endgame.

(Of course, if black is komaster, black could respond to white a with black c. But in general, black has to draw back to b because white will have little to lose in the ko.) 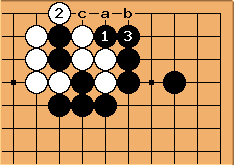 If Black does not play tenuki, he ends in gote. We can expect White a, Black b, White c in the late endgame.

(When compared with the sente diagram above,

here is worth only about 9 points in gote. Before yose, this is relatively small, so tenuki is most likely a better option.) 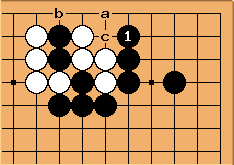 Black gives up the possibility of tenuki and ends up in gote anyway. In the endgame we can expect Black a White b Black c. 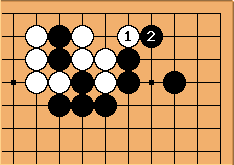 The third part may be explained elsewhere already