Whereas contact moves are considered bad for attacking (see don't attach when attacking), they are very useful when playing in the opponent's sphere of influence.

The reason for both is that contact moves in general will make both players' positions stronger. When you are attacking, making the opponent stronger is the last thing you want, but in an invasion, or when you are defending your own weak position, strengthening the opponent is much less problematic - he is already strong, and giving him a bit more won't hurt that much.

On the other hand, strengthening your own stones, and giving them the maximum amount of space, is often useful in these contexts.

Scartol: Correct me if I'm wrong, but I understand that you're supposed to attach to the stronger stone, as in this diagram (attach at the marked spot, not at a): 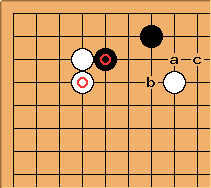 This is discussed in Attach To The Stronger Stone In A Pincer, but it seems like it would apply here, too.

DJ: Scartol, it seems to me that you're mixing things up a bit...
In Attach To The Stronger Stone In A Pincer the example is given on how to attack a stone by not attaching to it, but attaching instead to another one, in order to gain strength to use for attacking the first one. (Does it sound too confused?!)
Here you are in a different situation: you have to defend your stone! Therefore you should attach to the weak white stone... May I suggest a and b as possible options? The marked black stone doesn't make much sense to me... ;-)

Bill Spight: This is a very strange diagram. The black stone is on the second line.
Scartol, are you suggesting attaching to 2 stones? If you attached to a single stone, the reply to extend with the second, marked stone is not bad (even though there might be better plays). By attaching to the two stones at the marked spot, you make them more efficient than they were to start with. That is normally inadvisable. Black c looks more reasonable. :-)

Scartol: Yeah, I was mixed up, but DJ explained it okay. Can someone provide a diagram that does illustrate the principle of this page (and maybe delete all the rambling I've done?)