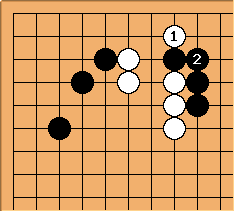 Why are the other moves wrong?

The correct solution is a good example of avoiding giving your opponents forcing moves (kikashi). In the following diagrams, I have tried to explain why the alternatives are not good. 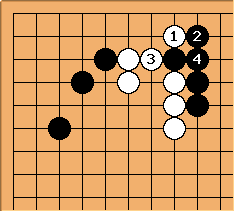 If Black answers at 2, he gives White a free forcing move at 3. Compare this with the correct solution (tewari). If White played 3 in the correct solution, would Black play 2? Maybe, but she keeps the option of playing elsewhere and there are probably bigger moves on the board... 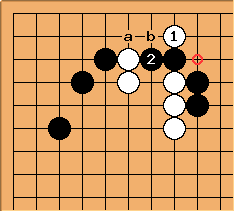 If Black plays 2, White could play a (threatening to cut) or b and Black would still have to come back and play at the marked point. A white stone at a of course means that the black corner is even more open than before. 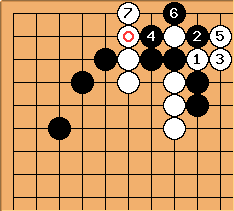 The marked stone threatens to cut at 1.

Grauniad: Could one say that move

in the first diagram is a[n] honte move, or one of Kageyama's "proper" moves?

HolIgor: Neither. By a proper move Kageyama meant something slightly different. And by honte we mean a move that fixes a weakness while being a little bit slow. This is just a good shape, a move that leaves the opponent' weaknesses exposed while own shape solid.

Charles There is a Japanese term honsuji, or 'correct style'.

Grauniad: Just seen on rec.games.go: "[Go] takes a deep understanding of hard to define concepts just to be mediocre." :-(

Charles I believe the real importance of understanding correct style as a kind of theory of criticism of plays only kicks in at ama 5 dan - 6 dan. Or, to put it another and blunter way, you may think you're really closing the gap on the pros before then, but you might be wrong.