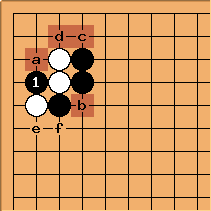 What is the purpose of

? How should White react? 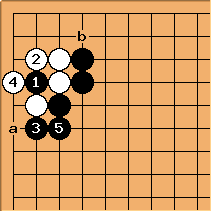 If White takes the bait as in the diagram, we can say that she has been effectively tricked, as not only she is shut in, but also a and b are sente for Black. 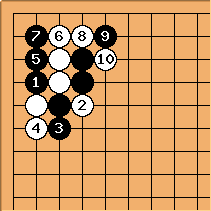 can be played only when the ladder is favourable for Black, otherwise White can crush black with the sort-of-easy-to-understand sequence.

If White resists with 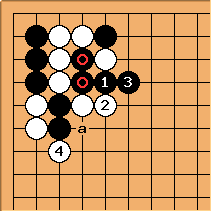 If this ladder isn't favorable for black, black has to give up either the corner or the

stones, so the initial inside cut looks doubtful.

More discussion to be found here 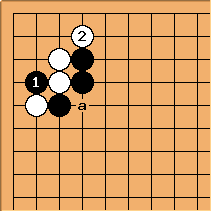 ? This move aims at the cutting point at a. Black cannot take the white stone on the left. 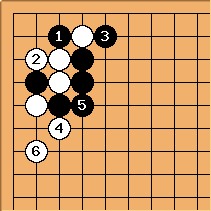 As found through Jansteen's GoBase. Which means my "new" move isn't a new move after all. Hm... Should I be happy or sad? GoranSiska 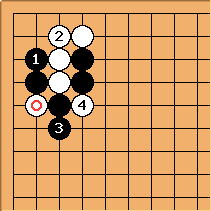 The "only" continuation would be

is an attempt to control

, as well as defending the cut. But

cuts there anyway as this brings the aji of

back to life. As I see it - Black is in trouble. 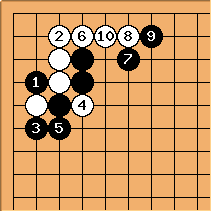 If I have missed something, it seems that

is the only move we haven't discussed yet. 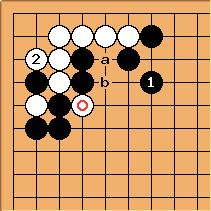 This shows the follow-up from the previous diagram. White is locked up in the corner, but the marked stone still has quite some aji. Exchanging White a for Black b would decrease this aji. 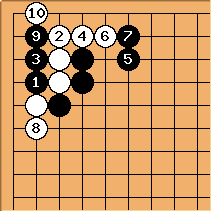 . It has the feeling of a true refutation of a trick move. One question is whether Black can resist more strongly with

than in the original diagram. Considering only the corner it does not seem possible. However, there may be a problem... 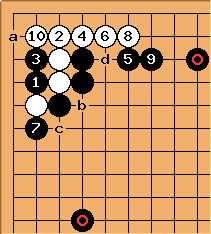 Remembering that the premise behind the 3-3 invasion is that Black has already played on the outside, can White afford to fight hard here or not? Black a now leaves White without two eyes.

Gregory Since the Black at a is a killer, wouldn't

leaving many more options of play? Am I misisng the obvious? 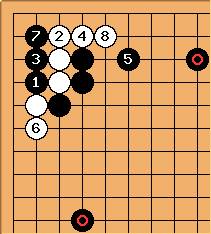 , White turns back to

it does not look like Black is going to able to contain White. --DaveSigaty 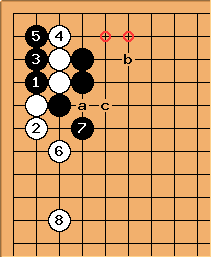 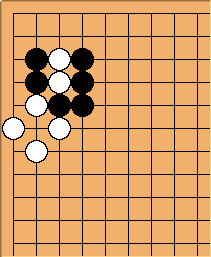 But what can White do if the ladder does not work for her? Setting up the double threat is clearly bad for her in that case. My first intuition was to play at

without the atari at a, leading to this variation.

I do however get the impression that this is good for Black: because the three white stones have only two liberties, White b is not sente, and White will have to play one of the circled points to use the aji of these stones.

tapir: That is the same with a well known joseki. But, the white ponnuki is weaker than the formation and white has an additional peep at c later. Only disadvantage is that the black wall is one stone higher. I would not mind playing this as white (if it suits me overall) 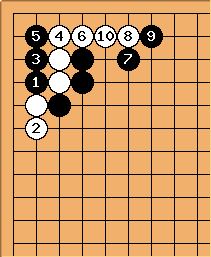 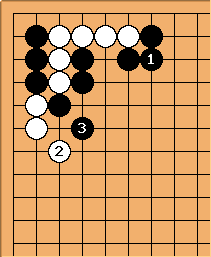 I have another option to discuss: 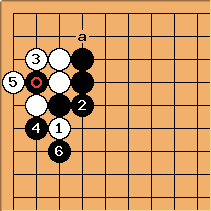 Could this be good enough sometimes? White is more confined than usual, but Black will have to add one more stone to take

Charles The cut is considered a trick play. It has been seen in pro play, though. It was discussed in an old Go World (reference, someone?).

DJ: Well, yes, I happen to have that Go World: n. 19, June 1980; this move is discussed to some extent, as it was played by Otake (then Meijin) against Sato Masaharu (then 7 dan), in the quarter-final of the third stage of the 4th Kisei.
I have written a page with a short report of that discussion. I decided not to add it here for reasons of space. 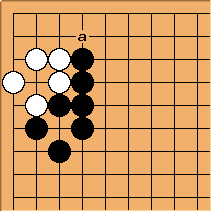 A very good suggestion. The value of a sacrifice depends on the wholeboard position. When Black takes the stone, his shape is much stronger (naturally ). Black a threatens the corner with ko while White a ends in gote. Therefore Black will most likely get to play a in sente. 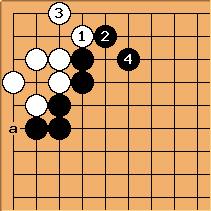 are double sente plays and this situation is likely to be played out fairly early. White is left with a as an endgame move since Black a can be ignored. Note that if

is one point lower, Black a is sente. 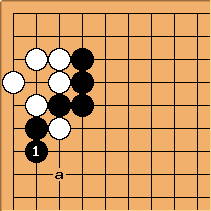 Depending on outside strength Black may play

. Because of the strong shape of the black stones White cannot continue with the usual move at a.

It's quite surprising how quickly the whole board considerations come into play.