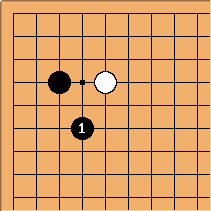 is very steady. Usually Black isn't planning any complex variations here, but to keep sente and create a solid position on the left side.

For pro use of this joseki, see the keima joseki in fuseki. 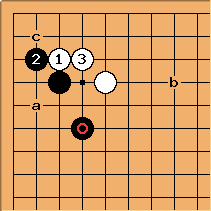 , Black at a is the standard play. The pincer at b is quite a new development in joseki (though played by Takagawa 50 years ago). Occasionally Black plays at c, but this leaves an obvious weakness and bad aji near a. Black tenuki is rare. (An example is Fujisawa Shuko's play against Ishida Yoshio in chapter eight of The 1971 Honinbo Tournament book: a rare case in which knowing a pro play can be detrimental.) 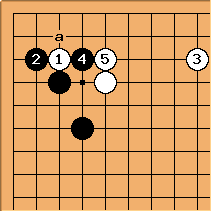 isn't captured yet. So even if black tenukis now, White has a to aim at later. The idea is similar to several pincer josekis where the attachment is played and then left. Without the

would have been sente; with

in position, Black needs to capture at a if he wants to take the corner. 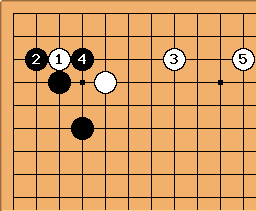 First known appearance: An Younggil (W) against Pak Yeong-hun in 2003. 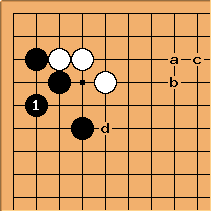 , the main line here, an extension to one of a, b and c is expected, which then ends the joseki. It seems that the tight extension at a has become more popular than c; the play at b will be made in connection with some overall consideration. White directly at d is also seen.

This standard pattern has somewhat fallen out of favour for black recently: his corner territory is rather small compared to the 34PointHighApproachInsideContact. The influence of the keima on the 4th line should be important if black is to not take the opportunity to take a large corner. (Source: Guo Juan). 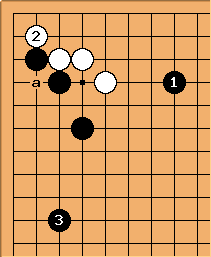 White commonly plays into the corner with

gives Black some sort of development on both sides.

in my game collection. Black either connects at a, or plays tenuki.

Charles Two examples I have (Gogod) are Takagawa games from 1954 (as old as me). A recent one was Yoda Norimoto-Kobayashi Koichi 2002-02-18 in the Kakusei final. 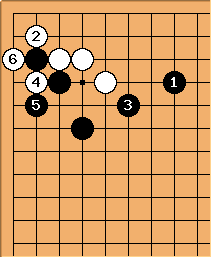 is another reply for black that seals white into the corner and emphasizes the outside. 3 games on GoBase have this pattern. 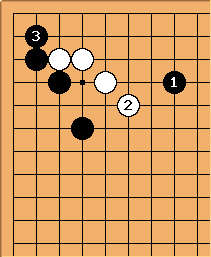 If white resists being sealed in and plays

, then black can play

and white is left with a group without a base. 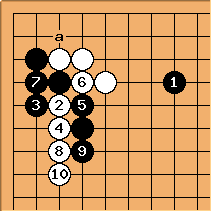 There is also a fighting line, set off by

. After some moves on the outside, Black goes back to a to live in the corner. 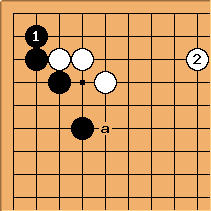 is normal. Possibly White plays at a. After that an extension along the left side is very big for Black. 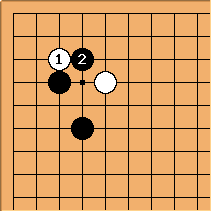 For the discussion of this move, see 3-4 point high approach, keima, attachment, cut 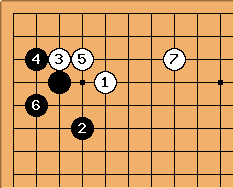