Phelan: I've recently had this

played against me, and didn't find a good response. Is

joseki? Are 'a' and 'b' good responses? What would you play against 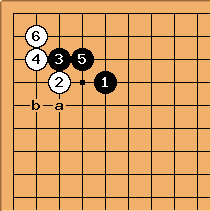 45Point43ApproachInsideContact doesn't mention it. On one of the corners I had no support on the left side, so I played 'a', he played 'b' and I extended.

On the other corner I had support on the left side, so I played 'b', he played 'a' and I extended.

No support on the left 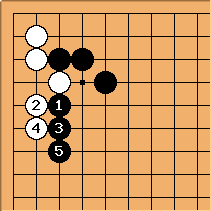 was an extension towards the right.

I really think I did badly here. Any suggestions?

fractic: My suggestion is to rethink your ideas about influence. To me this sequence represents an enormous success for black. The idea behind 54 point is to make influence. In the sequence White is horribly low and black has a good wall.

Phelan: Hmm, ok, thanks. That game went badly for me, and I was thinking it was because of this. Now that I look at it again, it does look good. Even White's possible cut doesn't look that threatening. I must have messed up elsewhere. :P 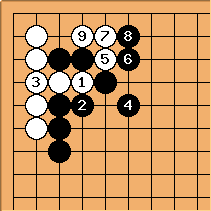 fractic: The cut is just gote endgame for White. And if Black wants he can fight in various ways.

Andy: White is pushing from behind on the second line. White fails.

Phelan: What would you do as White? 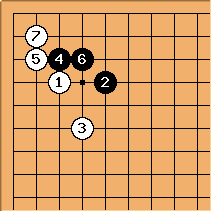 Andy: As white now? I'd lose. White has given away about 20 points from this exchange. Then I'd try to figure out where I went wrong and do better in the next game. White could benefit from learning some basic joseki. In particular, white might have imagined that she was playing the 34PointHighApproachKeima joseki, where

prevents black from squashing white down on the second line, as happened in the game. Without a stone in place here, white is savagely beaten. With this stone, this is playable, since white is undermining black's base on the top in exchange for leaving a less solid white position on the left.

thanatos13: my nooby senses are tingling, they tell me that white should clamp with 2 at 3 and let the stones die for a much better moyo. 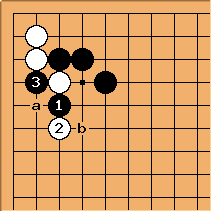 thanatos13: sorry Phelan for putting so much stuff on your page. I think 3 at a will make the white stones in the corner dead. What I was saying was that the left side, influence and bad aji was more important than the corner. 4 at b creates framework.

Phelan: Don't worry. :) I created this BQM because I couldn't find information on this variation. Feel free to analyze it. However, a note on this position. When I said "no support", I meant that there aren't black or white stones near it. So no framework. Even if there are White stones nearby, the two stones would leave an open skirt, and (since they aren't alive yet) could also be attacked with an invasion.

With support on the left 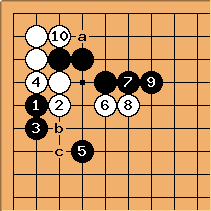 Phelan:The rest of the sequence was 'a','b','c'. This one worked kind of well, and if it wasn't for White having strength in the middle already, I'd be satisfied with it. 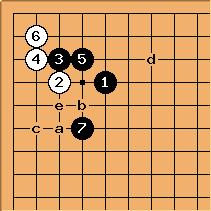 thanatos13: It looks safe to tenuki bringing in cash, or keeping safe your lovely influence on the top.

No support on the left? ok. then get the mid left or approach with a little space like 7, don't try to kill. This has been my 14kyu two cents.

7 at a will be answered by b. 7 is good because your influence is on both sides and it's light.

Phelan: I thought of

, but it felt too submissive, I didn't like White responding at 'a' or 'c'. Tenuki at

didn't cross my mind, but it doesn't look good.

tapir: I would prefer e as above. The best of the remaining possibilities is

(in Yay ignored) in my humble opinion. After

at a black can develop both side, but i still prefer the other variant somehow 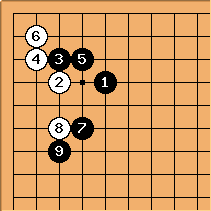 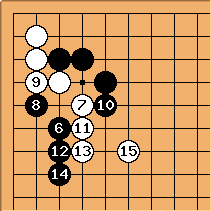 Phelan: Thank you all for your comments!