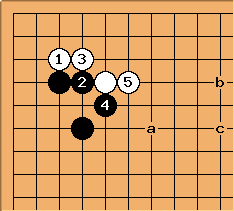 rokirovka: I played this joseki twice as White recently at the 18-19k level, and both times Black reacted with

. I transposed to hane at the head of two stones with

, and I stretched with

From here the two games developed in very different directions. In the first game Black backed off and played at a, I extended to b, Black replied at c, and I played elsewhere.

is usually a mistake. According to the Haeng-ma Tutorial For Beginners,

is what Koreans would call a Ja Choong Soo (literally, "self filling-up move"), a bad move that reduces liberties. Assuming that there are no other stones around, your 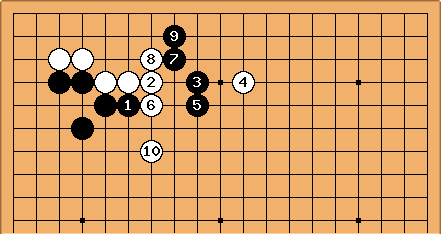 The second game was more complicated. Black pushed with

, I stretched again with

, then Black played the challenging

. I tried to pincer him with

, he stretched out with

, and I followed him with

, cutting off his stones to the left. The point of

was to jump out with my group and not get hemmed in. 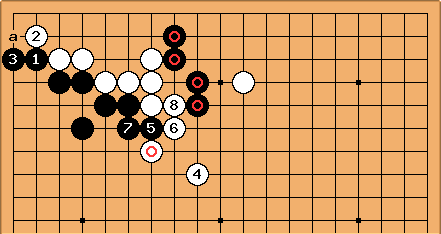 I continued the plan of leading my group out into the center, and

essentially ensured the completion of the plan, for better or worse.

BobWhoosta: White is definitely better in this diagram. The black formation on the left is ALMOST settled, but makes absolutely nothing for black because of the

stone. The white stone on the top is very light, but perfectly placed for disrupting the string of eyeless

stones, which should come under attack. White a is sente, and very large, and white basically has living stones extending into the center. Well done!!