The keima joseki in fuseki

Charles Since it is played rather frequently by my fellow-countrymen at my level[1], I'm quite interested in pro use of the keima joseki.[2] That is, it is quite hard to show that this way of playing is bad in typical positions, since both sides make reasonable shape; I want to approach the question of its proper employment from the side of ideal deployment. 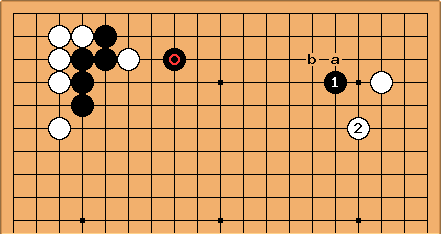 as a one-point pincer, an anti-minichinese measure, this is a common result.

Black ends the ''joseki'' in the left-hand corner in sente, so

next is quite natural. Then

in answer is a standard play.

(Dave It is perhaps worth noting that this is not a common result at the pro level against the mini-chinese. White is much more likely (a factor of 20 or 30 times) to make a shimari in the upper right with a or b in reply to this pincer than to play into the corner. Is it because she has no very interesting reply to

shown here if she jumps into the upper left corner?)

Charles I get a factor of ten. See pincer counter to mini-chinese, anyway, where the point about the enclosure is made. 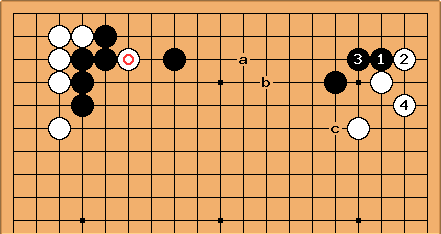 The main line joseki to

is expected. Next Black in pro games has played a, b and c. Besides shape, Black must consider the aji of 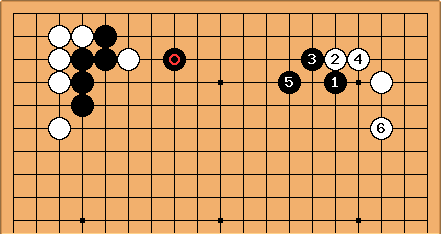 here allows Black an efficient side formation after

(and presumably sente, too). 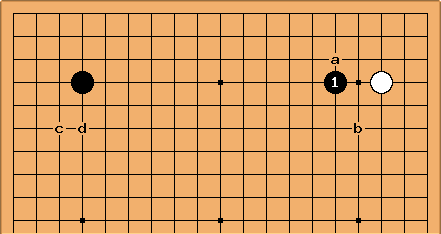 On the other hand this

is (according to pro game statistics) more likely to be met with a than with b, by a factor of about 50.

HolIgor: I don't like my komoku facing the hoshi this way. I the position on the diagram I'd play (and played a number of times) a but then an approach at c does not look good. I tried d but that is a weird approach to hoshi. There is not much in the joseki books about it. And there is a feeling of softness, submission about the move. So, as my last game went hoshi, komoku (mine), diagonal hoshi I chose to make a shimari rather then take the fourth corner. An inferior choice again. Go is frustration. I won the game, however, which does not mean that I solved my fuseki problems. 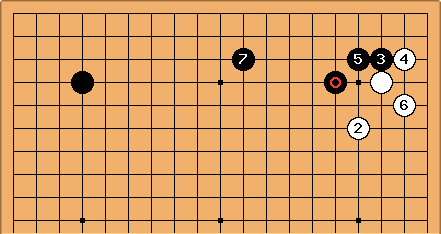 Black hasn't any reason to be dissatisfied with the plays to 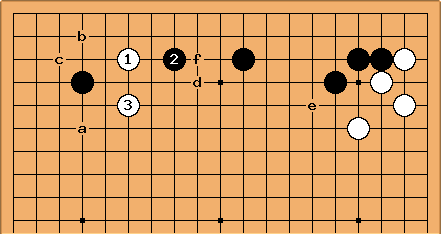 Dieter: When the left side is less wide than the top side, White enters here (5 games on gobase). The one game where Black pincers here, White goes to 3. Not enough games to say something useful but I get from this that

is not necessarily overconcentrated, which is backed up by your earlier analysis.

Velobici: (warning: 10k talking ;) This appears to be wonderful for Black. Make both ends strong. The single stone can jump out to a. White will have to run. (White b, Black c, just makes Black's weakest stones stronger.) The shoulder hit of d does not appear playable by White. (comments please and then lets replace my gibberish with useful material.)

HolIgor: To Dieter's comment. Assuming that the top side is wider than the left white can try to enter at f. If black attacks from the left white jumps out or seek complications while the possibility of entering the left top corner remains intact yet.

To Velobici. It seems to me that white is not so bad in this situation either. This is the black's moyo. White has to look for sabaki, settling the stones. If black plays a white could even try e first to erase (strengthening what is already strong) and then lean at

to make a shape.

[2] Bill: A confusing appelation. It could apply to several joseki.

Charles As could tsuke-nobi. A page has to be called something, you know. Why so much moaning? There's the immediate link up there, giving full details.

Bill: The link is OK. My main concern is for the page title. Another confusing title.

Charles This is material I researched for a BGA Training Day earlier in this year. I might in the past have published it as an article, in the AGJ or BGJ. I would have been astonished if the editor of either of these had called the title 'confusing'. (Who, by the way, is confused about it?) So I choose to make this public here at SL. If, perchance, someone comes up with AnotherKeimaJosekiInFuseki as a page, I'll happily change this title. Until then, I think this is just tiresome.

Bill: Besides yourself, Charles, who could tell what this page was about before looking at it?

Dieter: I'd like to emphasize that I find this an interesting article, which will surely affect my future use of this joseki.