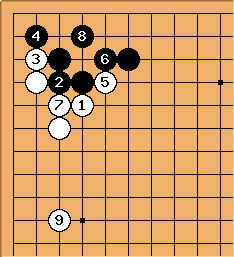 is the vital point, even though it is an empty triangle. 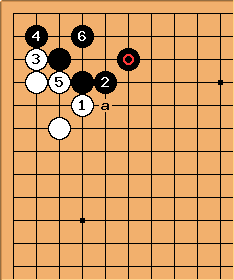 unkx80: I don't think it's so much about overconcentration. I believe that it's got more to do with destroying White's eye shape.

Bill: Well, it is a question of emphasis, isn't it? Anyway, let's take away the

Serpent: Because doing so would open the black stone above 1 to atari.

(Sebastian:) I don't see that. That black stone has three liberties, reduces

's liberties to two, and it can easily be connected if need be. 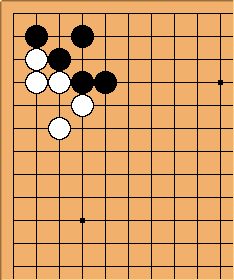 This is fine for both players, no? Black does not need an extra stone.

Eagle : Tewari analysis may show that the black shape is overconcentrated, but i think in practice the second diagram is nothing worse than the first one (i think it's better , may be just because i missed something ) .It's worse than the third diagram,not the first diagram . Am i wrong ?

corwin: To my eyes, the biggest difference in the two diagrams is that black ends in sente in the first, and gote in the second. 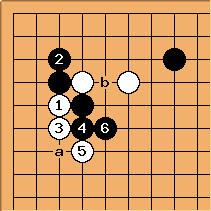 tderz: After the unreasonable cut

gives Black the miai of either a or b,
hence 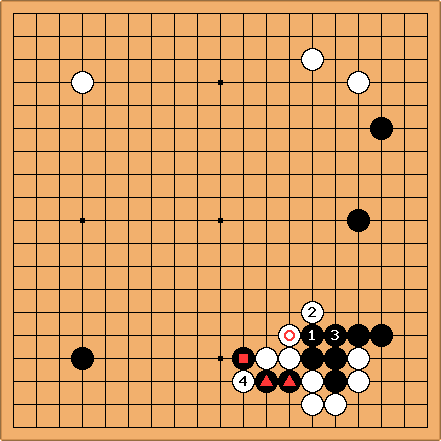 Similar is this 5-4 Joseki, where white's empty triangle would be a good tesuji to punish Black's overplay-cut:

is an overplay, which empty triangle 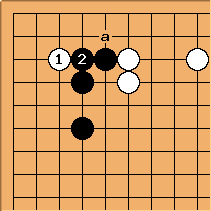 (empty triangle) is often a good way to respond to White's 3-3 invasion in this shape.

(Sebastian:) Indeed, this is not uncommon, with 26 pro games played this way (according to SmartGo's library) only second to 'a', which occurs 49 times. And it occurs more frequently in games that led to a win. But why? What are its advantages over 'a'? (Later:) I found this discussed here, so I see some difference to 'a' now, but I'm still not convinced that it's superior. 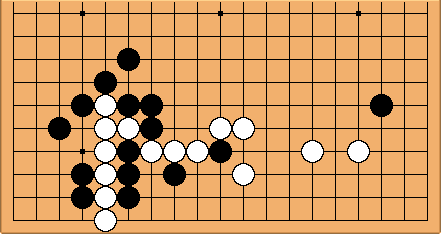 This problem comes from the Tesuji Dictionary, by Segoe Kensaku and Go Seigen. They say that if you get this one right, you are 5 dan. (Of course, you have a big hint. ;-)) 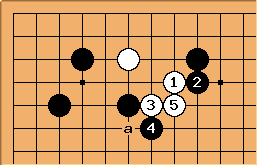 is one of the best ways of escaping with the lone white stone at the top.

makes the empty triangle and then White has a rather clear exit, while aiming for the cutting point at a (at the correct time). 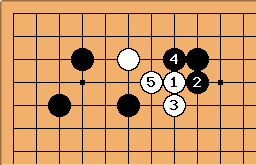 here would be a mistake.

to connect with a bad empty triangle.

Bob McGuigan: Here's an example from one of my own games (I was Black) where Black responds to a White empty triangle move by making one too. White's empty triangle looks good but after Black's response ... 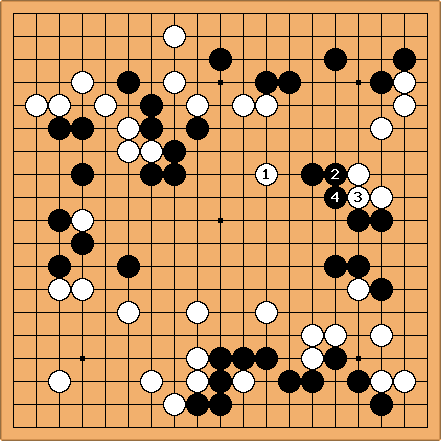 takes a liberty from White and leaves a lot of aji against White's group. 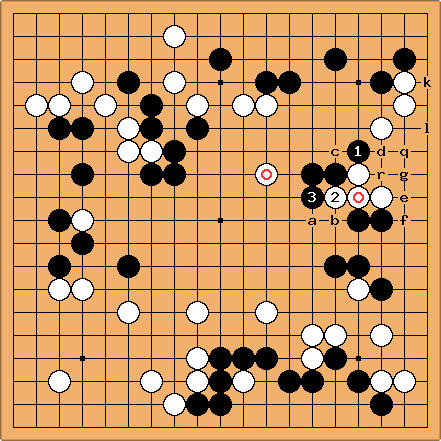 tderz: Interesting position. (yet I think black's empty triangle is not necessary)

is tempting too - a & b seem miai now.
It is the same technique as in above joseki.

The white cut c seems far fetched with the created white weakness e.
If White wants to solidate first at at f, cutting through with black d would be possible
(resp. Bg, after white q, she cannot cut at r),
however, if replying

) and could hane oneself with f.
Can White survive? 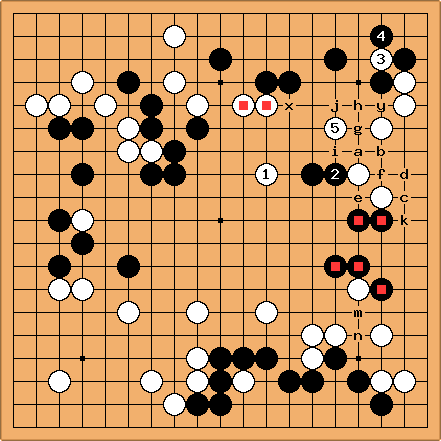 tderz: other ways for White to avoid an empty triangöle?
Perhaps not, after

(protecting against the cut y) to

, there is still no connection to the left

, due to Black x (if Black a to white j have been exchanged),
but white cut capture at k and had no problems.

could become a target after

, if Black tries too hard with black a to i? 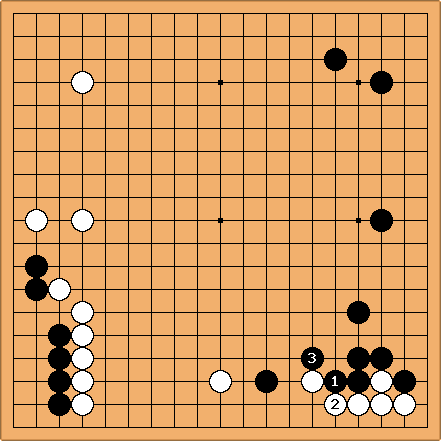 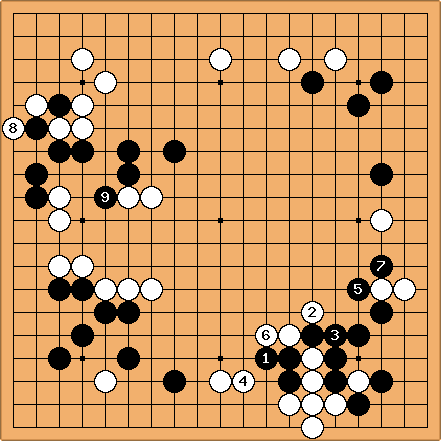 is a good empty triangle.
This a game with many local "tenukis" -

even in succession ! -
for keeping the initiative.

This empty triangle is sometimes played instead of the push at a. See Taisha descent variation. 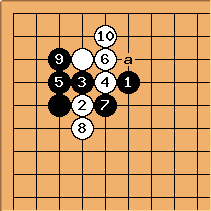 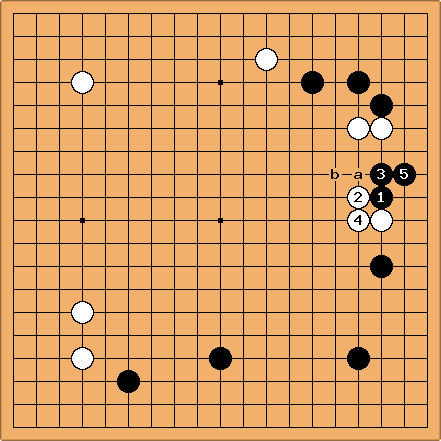 of course!)
Still he voluntarily created an empty triangle.
Should he have exchanged a for b first? 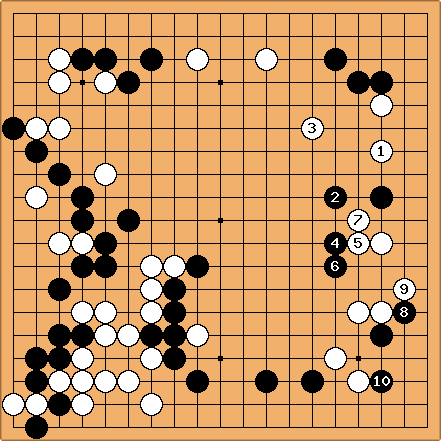 is the third ghost move. It is an example of a "bad shape/good move", and eventually allows Jowa to launch a difficult splitting attack that results in Black's resignation.

Numerous problems are based on the empty triangle move which kills with a nakade shape. Generally, bad shapes can turn good when captured, becoming inefficient eyespace for the opponent. 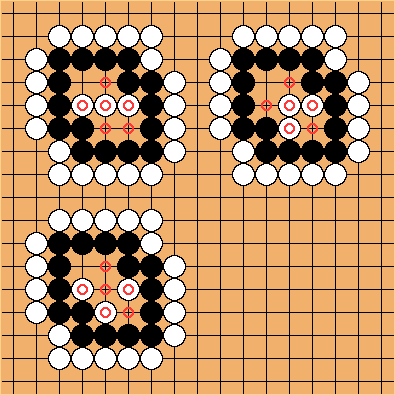 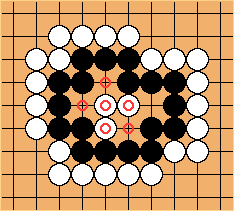 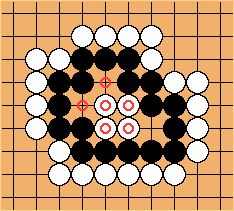 From a classic collection

Bob McGuigan: Here's an interesting example from professional play, Ushinohama Satsuo 9p(W) vs. Takemiya Masaki 9p(B), Meijin League, 25 January 1979. The diagram shows the lower half of the board after 86 moves, 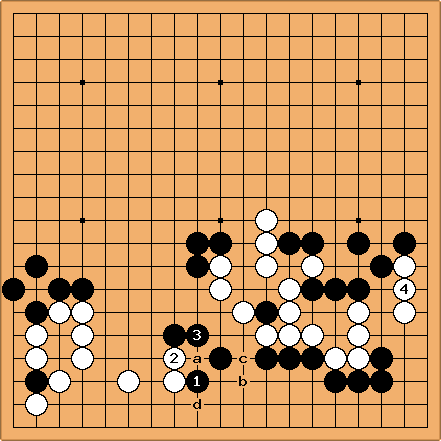 , a sort of standard good shape move, but in a commentary he criticized

and Takemiya played tenuki with a large territorial move in the upper right corner(not shown in this diagram). This allowed Ushinohama to initiate the sequence White b, Black c, White d, which cost Black a lot on the lower side. Takemiya commented that

should have been the empty triangle play at a, which would have been good shape in this situation and would not have allowed White to cross under with d.