Path: Who Was That Go Player... =>
Sub-page of WhoWasThatGoPlayer1

Cho Chikun.
HolIgor guessed right, but he confused this episode with another: Cho refused to celebrate his promotion to 5D saying: "I didn't come to Japan to become 5D!".

Takagawa Shukaku, in the fourth game of his ninth straight defense of the Honinbo title against Fujisawa Shuko (1960).
Takagawa, who was nicknamed "Wily Old Fox" (because he was believed to deliberately play bad moves every now and then to confuse the opponent), played White1 in the Dia. below as a kodate. Shuko connected immediately but then cried: "Takagawa, that wasn't a threat!" to which Takagawa replied: "Really?" According to Takagawa, he also had overlooked the fact that White cannot cut, see the second diagram. 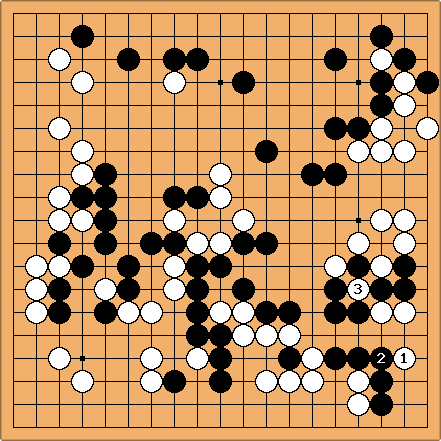 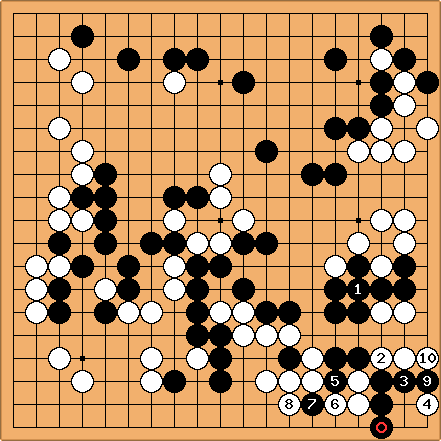 Query: What is the source of the above reference to Wily Old Fox? First of all, it's a tanuki - a raccoon not a fox, and while this does have a reputation for being wily, no doubt the Ta-Ta alliteration also played its part. But the main point is that the story comes from the 8th Honinbo. Kitani was the firm favourite before the match began against Takagawa. Mainichi Shinbun ran a readers' poll and 65% forecast victory by Kitani. But one notable supporter of Takagawa was Maeda Nobuaki 7-dan who gave his pre-match views in Kido. It is from this that the nickname came. Maeda said that Takagawa had not done so well in ordinary games, but he won the games that mattered such as the Honinbo and Oteai. He was a wily man, like a tanuki. So where does the bad move insult come from? Until we see an original reference I don't think we should believe it. Sounds like a conflation of two stories to me. (John Fairbairn)

Answer: I found the whole story in an old issue of Go World (as soon as I get back home I'll tell you the number): it was an abridged version of Takagawa's memoirs (written therefore in the first person), published to celebrate him. He said that when he played the non-existent ko threat he already had such a nickname... so there's no confusion between 8th and 10th Honinbo-sen ;-)
-- AvatarDJFlux

DJ: Here I am, back at home.
I do not speak Japanese nor I read it (except for the few obvious kanji in go diagrams) so all my information is second-hand from English-language publications: in this case, I got everything from Go World, issue 41 (Autumn 1985). To celebrate Takagawa's retirement in 1984, the magazine published an extensive article on his life and career (page 12).
The article was edited (and translated, I suppose) by Bob Terry. Mr. Terry says:

"Some of the article is taken from pieces he (Takagawa) has written himself, some from pieces written about him, and some from the string of interviews he has given for various publications over the years. We have woven the material together and edited it for the sake of continuity."

The part on the non-existing ko threat and the "wily old fox" nickname is on page 24 and is written in the first person:

"I played hard to win the second game but was roundly defeated in the third. That brought us to the fourth game, the one of the infamous non-existent ko threat.
... snip...
Fujisawa took no time to connect at 16 and then suddenly he gasped, 'Takagawa, that wasn't a threat!.
'Really?' I had also overlooked the fact. I am often accused by fans of being a wily old fox who deliberately played a bad move to confuse my opponent and score an upset, but that is hardly the case. I would have to be some kind of wizard to do that."

As you can see, I almost quoted literally Bob Terry's edition of Takagawa's own words. I am very happy to learn that the Tanuki (raccoon) was his real nickname...

Fujisawa Shuko, who in 1992 at age 67 defended his Oza title against Kobayashi Koichi (then Kisei, Meijin and Gosei...)
He had won the title the year before from Hane Yasumasa, which set another record: the previous older title holder was the late Shimamura Toshihiro 9D (the professional's professional), who at age 65 won the 1977 Tengen against Sonoda Yuichi 8D.
Shuko has an incredible record of winning titles at a mature age: he won the first Kisei title when 52 years old, and kept it six straight years, at a time when all title holders were in their twenties or early thirties.
He had also a knack for winning the first edition of a title: not only he won the first Kisei(1977), but also the first Prime Minister's Cup (1957), the first Nihon Ki-in Number One Position (1959), the first Meijin (1962), the first Haya-Go Championship (1969) and the first Tengen (1976)...

Kobayashi Koichi when still 8D in the late seventies.
He said that when he studied in full earnest, he didn't have to cut his right index fingernail, because it was kept short and polished by the abrasion resulting from holding stones...

Kajiwara Takeo 9D, the uncompromising theorist and aesthete of the fuseki, author of "The Direction of Play". When Kitani fell ill, he took over teaching in the Kitani dojo: he's been the teacher of Takemiya, Kobayashi and Cho amongst other.

Nakayama Noriyuki 6D, in his beautiful collection of essays "The Treasure Chest Enigma", a precious book (now out of print) that he published privately, and distributed through The Ishi Press.
One of the best book on Go ever. I'd like to put here one of his astounding whole-board ladder problems, but I do not want to break any law on copyright...
Nakayama is well known as one of the professionals that most toured the West to spread and teach Go. A delightful person, he's always ready to play amateurs (he even played me - a one-to-one game - during the European championship in Terschelling!). He's never hard-spoken when confronted with our stupid mistakes, but always says something encouraging, like: "Ah! New Joseki, neh?!", or: "Oohh! Stroong move! But maybe... this (playing his move...) better!!!"

Bravo to Dave who guessed everything right!!%%% (I suspect he has my very same books and magazines...)

;-) Dave (But where was the ko threat written up in English? I have it from one of Shuko's books in Japanese...)