I am in the fortunate position to have a weekly Go club at work (8-10 players from 3 dan to 20 kyu - bless the French and their two-hour lunch breaks), and I sometimes play against the stronger players, with 5-8 handicap stones. Often I find myself with a large moyo, which White invades and manages to live in or get out of without me getting any benefit from the attack. Also, White often says that she should not really have been able to live. 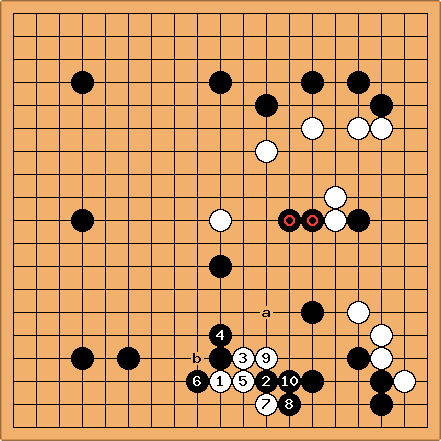 Today, the position was as given on the left (roughly - according to my memory) when White invaded with 1. The sequence which followed is shown. I approached from

since I reckoned that my lower right corner was the corner I'd rather not push her towards. Playing

or similar make an instant local fight which White (being 8 stones stronger) normally wins. I quite liked

) giving any immediate benefits. I was pleased to see her play

to limit her base, and although I could see the

sequence, I didn't think that

White then played a, which made me afraid of losing the connection to the marked stones - although I managed to 'chase' her out, and build a wall towards the left side of the board (and keep my groups connected), I was unable to profit largely from the chase.

I felt that I had not done too badly - chasing for the kill is not normally a good idea and I did get some profit from it, albeit not as much as I'd wanted. However, White later said that I should have been able to kill her invading group, but we didn't have the time to go into it.

So, the question is:

In a positions such as this example, what can Black do to put more pressure on White? What should his first priorities be when he applies the pressure (direction, distance from attacked stones).

First some comments on the sequence that was played:

: Ah well, I guess one has to do something giving (what seems to be) 8 stones.

: When someone attaches against your stone, the best thing normally is to answer directly. I can imagine that you find

too frightening, but then still you should normally play

: I think b would be better.

: Black must cut in this position. The position is similar to Black having peeped and White not having answered.

is mandatory. After this, probably White will play at

) will follow, and Black gets a nice amount of territory.

Konrad Scheffler: Those are good comments, I'd just like to add one more in response to "I was pleased to see her play

": that is the wrong feeling. After

, close your eyes and sit very still - if you listen really carefully, you will hear a tiny but heart-wrenching sob. That's the stone at

crying. It's almost worthless pushed up against white's solid connection, just think how it would have loved to be a cutting stone at

instead. Stones have emotions too, it's cruel to upset them like that...

Then, the moves after White a. There are two possibilities:

1. Be aggressive, take away eyespace, and attack; 2. Be less aggressive, but still attack. 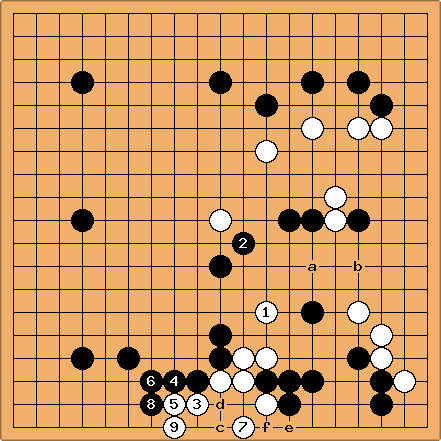 To start with the second (probably worse in this position), a sequence like the one to the left is not unlikely.

is a nice move, connecting Black's stones while stopping White's from doing so. A very good alternative is Black a - not only helps this in encapsulating the white group, but it also has a very nice follow-up at b.

White probably will have to make eyes on the edge. Here White succeeds, but Black is still happy with his thickness, and after

will go on to make a huge framework on the left side.

zinger: I'm not so sure white succeeds in making eyes this way. Black can play c, white d, black e, and white can't finish his second eye with f due to damezumari.

Steve Kroon: I agree, Black can kill that way (although he'd be unlikely to spot it at 10 kyu). However, White can still live with 9 at d instead. 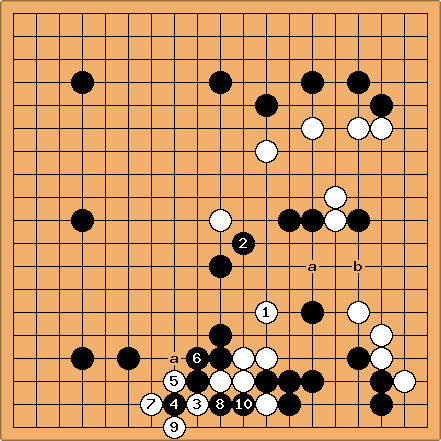 In this position, Black can also play two step hane at

here. If White defends (at

or something like that), Black defends at a, and White has only one eye on the edge. White will have a hard time finding a second, while Black already is making profit out of his attack. If White captures

, Black crosses under with

, and the white stones on the right seem to be captured. 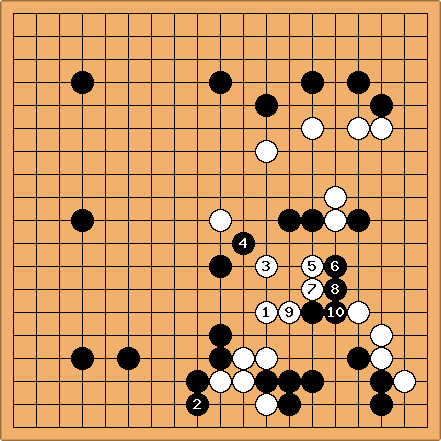 In this position, because he is quite strong and the white group very weak, the more direct attack with

is perhaps even better. What will happen next is not clear, but White will have to do some elbowing around to make two eyes. This diagram shows one possibility, and it is a great success for Black: White will still have to work hard to make his second eye, while

do great damage to White's right side. 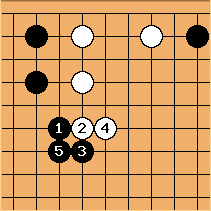 Thanks for your advice. Your general points crystallise many of the things I was struggling to make clear to myself. The difficulty is still in knowing when to attack forcefully and when to attack more reasonably. I suppose that the only way to know when to do either is by experience and being able to recognise killable or attackable shapes/groups without having to read through too many complex sequences.

Last week I gave a lecture to the beginners at our club about instinctive moves. That is to say, the first move you should think of in a certain position. The moves

, as already criticized by Andre, were two of the basic examples.

: "Answer a tsuke (attachment) with a hane."

This should be your instinct, but instinct should of course be questioned. In many cases a nobi (stretch) is called for, sometimes an ikken-tobi is playable, but the majority of cases orders for a hane.

: "Extend from a crosscut"

Rearranging the order of moves, if Black had played

, the configuration would be an extension from a cross-cut. Here too, it sometimes is better to atari from a crosscut, but one's instinct should be to extend. From which stone and in which direction, that's a matter of analysis.

ignore two basic principles in Go (as far as this humble second kyu is concerned).
1. Connect your stones (and likewise cut your opponent's stones).

2. Don't let yourself be shut in / surrounded (and likewise, shut in your opponent's stones)

There is another awkward position on the board, with respect to the above mentioned principles. I have taken the situation before 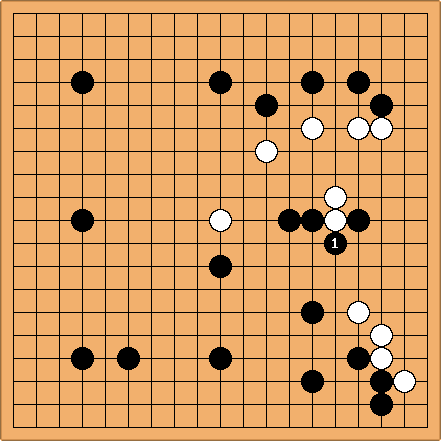 should be played at any moment to make an attempt to stop the white groups from linking up, and to link his own stones. He cuts on a large scale, even if one or more of the stones get captured.

Compare this with a white play there. 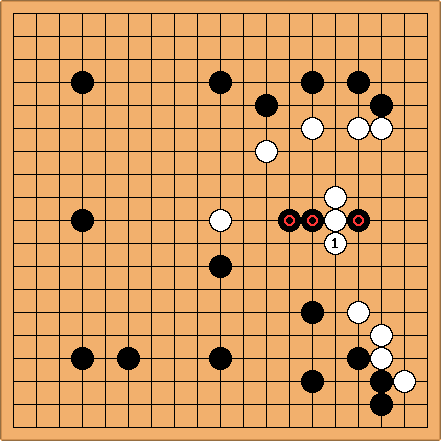 The right side has become one large white territory, the white groups are connected on a large scale, and the marked black stones have become useless.

Many of the proverbs, both in small-scale tactics as in large-scale strategy follow from these two important principles.