A Long Wall with Gaps

This position occurred in a game I was playing. Discussion afterward with the opponent ( W ) revealed that he thought he was behind. My opinion was that I ( B ) was way behind. 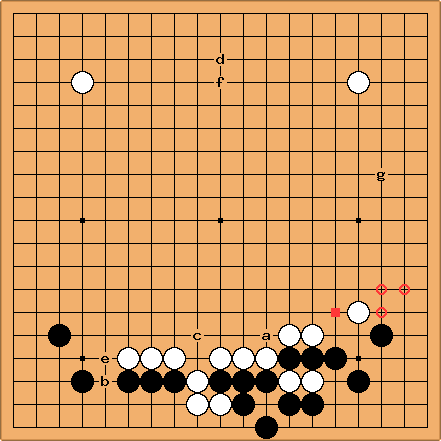 Certainly Black has close to 40 points, while W has none; but Black is undeveloped on all but the bottom; and White has the nice large wall. It seems that the 40 points can be made up rather quickly along with a few more points.

On a side note, I called W wall thick which my opponent disagreed with. I believe that while there are defects, they are minor. Who is right?

Bildstein: White is thick. The cut at a doesn't even work. White has so much space to move, there is really no pressure on this group. And with the two stones at the top being White, and there still being a weakness at b, White's position looks fair. But as for a judgement about whether or not the territory in the corners is enough to give Black a lead, I don't know.

tderz: I'd rather take White, espec. when assuming that black continues to play this way.
This doesn't mean that it's an easy game "to carry home", perhaps few games can qualify for this. Charles White is not really thick. At some point the peep at c will start to be important in the fighting. By eye, I would say that White is a little behind here; but within the margin of error of typical games for kyu players. White's position isn't strategically lost. Net example 11. Thad While the net question is interesting, do you have to capture the two stones Alternate? Also on a scale of -10 to 10, where:

and equivalent negative values when White is ahead;

where does Black stand?

How would you suggest White proceed?

Charles 'A little behind' means you should try to win by skill, not by tricking your opponent. Say White is 10-15 points behind. There are plenty of opportunities to gain 1 or 2 points. Being 30 points behind - say you lose a corner without compensation - starts to be serious.

Harleqin: It is Black's move. Where should it go, and how does that affect the positional judgement?

Charles I think the wedge Black d is a particularly big point. The other area that is very interesting to me is with the circled points, preventing White walling off the side. Given the tactical confusion of the central issues, Black can hope to resolve the right side by fighting. Of course the bulge point at e is crying out for Black to play it also: but I think the exchange Black e-White f would make White feel more hopeful.

Bob McGuigan: I think the discussion on Net Example 11 shows that White cannot be complacent about the strength of the lower white group. I would be inclined to take a big point as Black and figure that White may have to make a defensive move if play in the center develops the right way for Black. Without analysing very much I'm attracted to the tsukekoshi at the point marked with a square, though I wouldn't want to play it right away.

Charles This position is certainly a big exclamation mark. Here is another issue for discussion: Peep Exercise 1.

DrStraw: There is no question that B has 40 points of solid territory. The two W corners can be estimated at 10 points each and so the question is whether W's strength is worth 20 points. I think it is. Right now the peep at 'c' is not a threat because white cannot follow up with 'a' (there is a geta capture). Also, B cannot easily slide in on the right without adding to W's central strength. B does have potential down the left side but it is no greater than W's potential elsewhere. Because it is B's move I would consider the game even - within 5 points. If it were W's move I would judge him to have a won game.