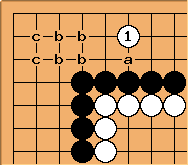 In this (oversimplified) situation Black surely is quite strong! But when White invades with 1 I'm always at a loss at how to counter most effectively. Situations like this come up surprisingly often when playing a computer program...

After White 1, I tend to play at a, with the intention of forcing White towards the edge.

Perhaps playing at a is reacting too much: should I just point my attentions elsewhere on the board? Risking any of White's b moves of course! Or even c if the computer feels I'm having a bad day.

Any hints would be welcome!

Playing at a is not reasonable in this position. You add one stone where you are already strong, a stone the effectiveness of which is very small (because in this situation it tries to do the work that other stones have already done).

Now, remember that one of the proverbs states that your opponent's best move is your best move. If you are uncomfortable with plays at b be first to play there instead of a. 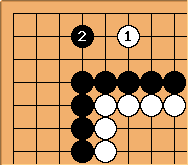 Another important thing: White's stone is lonely. Don't touch it. That will make it stronger. Your first task is to try and keep opponent's stones separated.

JanDeWit still doesn't get it, and asks: OK, I see White won't get to the corner but what if she makes a two-point jump rightwards? That's a base, right? I don't just want to defend the corner, I want to stop White from getting life. And most of the time, Black's position is not as strong as in the diagram.

HolIgor: two stones on the second line one space apart don't make a large enough base yet (eight stones on the second line live, seven live or die depending on the turn - see six die but eight live). But they could connect to some other stones in that part, of course. Then White gets some large yose moves. At the end of the game such moves can be big enough to worry about. But early in the game they are not that good. The second line is a line of defeat (on the 19x19 board at least). If you fear the escape most, then you should block from that side first; but in this case White has good chances to live in the corner. Fourth line stones don't keep territory too well, you know.

Also your comment that touching a stone makes it stronger intrigues me, could you elaborate on that? Or even make it a proverb?

HolIgor: There is a proverb that recommends one to attack from afar and defend close to the opponent's stones.

Giving it a little thought, do you mean that by touching a stone I give it opportunities to (or even force it to) extend its liberties (from 4 after playing 1, 3 after the black move a, to 5 after White's extension)?

MortenPahle: Just to add some more on this: In general, if you attach to (touch) your opponent's lonely stone with one of your stones, his natural reaction will be either to extend, which strengthens his stone and leaves your stone weaker, since it is close to a two-stone 'wall' of his, or he can play a hane, in which case your stone has only got two liberties left whereas his two-stone group still has five liberties left. We could put some more at DontAttachWhenAttacking and UseContactmovesForDefence. (Later :-)

JanDeWit: I think I get it now. The discussion on Tsuke and overconcentration helped clarify things further. Now, to translate to this to practical playing...

JanDeWit: Recently, I've come to the 'insight' (ahem) that trying to kill White 1 directly isn't the best approach; instead I try to prevent White from gaining eyespace. Black 2 in the second diagram is a good move for this.