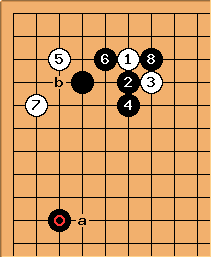 The 3-3 point invasion of

can be played if the left side is important. Usually,

(or Black a) will be present if White plays here.

After this, Black will have to choose.

is standard, allowing White to enter the left side but gaining thickness on the upper side in return. The other possibility is Black b, which blocks White out of the left side, but allows her a quite large piece of corner territory. Locally, it means a loss for Black, but it is nevertheless often correct in a global context - when this joseki is played, the left side is important in most cases. 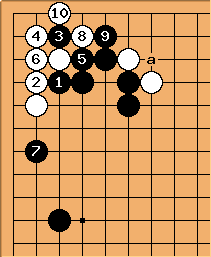 is given in Ishida's book. If White makes life with the moves

and W0, Black may leave the cut at a and take sente. 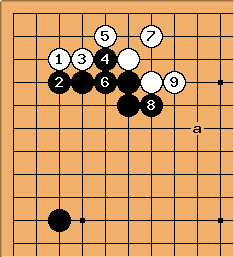 , White can easily get a nice amount of corner territory. Black himself builds a wall facing the right.

, Black can play elsewhere, but if he does want to extend his wall, Black a is an excellent point. Locally, this result is considered good for white, but it is nevertheless played often, especially when Black is building a framework on the left side, and the upper side is not so important. 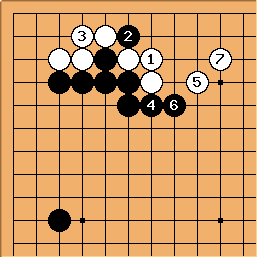 If White connects with

, immediately playing the tesuji of

is correct. This stone makes 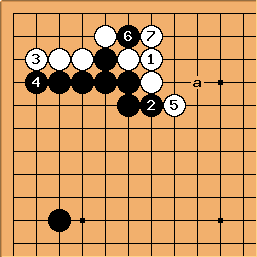 first is incorrect timing. After White has exchanged

, so now she will play at 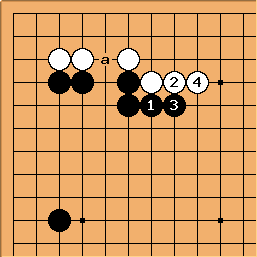 If he does not mind pushing White along the fourth line here, Black can also push at

without playing in at a first. 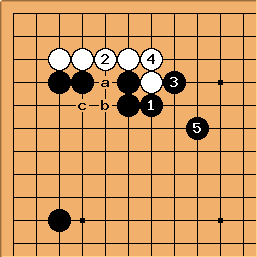 here. White will of course get less territory on the upper side now, but she has the sequence of White a-Black b-White c to look forward to, to reduce the left side.