Honinbo Shusaku (本因坊秀策, Kuwahara Torajiro, Yasuda Eisai, Yasuda Shusaku, Kuwahara Shusaku or Invincible Shusaku, 6 June 1829 in Innoshima, Japan - 3 September 1862 in Edo, Japan[1][2][3]) is a Japanese professional go player from the 19th century. He is known for his undefeated streak of 19 games during the annual castle games; thirty-game match with Ota Yuzo; lead innovator of the eponymous Shusaku opening for Black; post-death ascension to one of the Go Sages; and next to his teacher, Honinbo Shuwa, considered to have been the strongest player from 1847/8 to his death in 1862. He was nicknamed Invincible Shusaku because of his castle games performance.

Shusaku was born Kuwahara Torajiro (桑原虎次郎) on 5 May 1829, in Tonoura, Innoshima as the son of merchant Kuwahara Wazo.[1] His talent for go was discovered early, and by the age of six he was known as a go prodigy in the environs. Lord Asano, the daimyo of the region, heard of the child's qualities. After playing a game with him, Asano became his patron, and allowed him to get lessons from his own personal trainer, Hoshin (a player of professional level). In January 1837, Ito Showa, one of the strongest players of the day, visited Innoshima, and played a game with Shusaku. He was so impressed with the boy's ability that he invited him to become a pupil of the Honinbo house in Edo.

On 28 November 1839, Shusaku was awarded a professional 1-dan diploma by Honinbo Jowa. The following year, during a one-year visit back home, he was awarded a yearly stipend by Lord Asano. Arriving back in Edo in September 1841, Shusaku was given the name 'Shusaku' and promoted to 2-dan. In 1842 and '43, he was promoted to 3- and 4-dan respectively and started using the Shusaku-style opening. In 1844, he left for another stay at Innoshima, this time staying for eighteen months.

In July 1846, during his travel back to Edo, Shusaku met Gennan Inseki, who is said to have been of Meijin strength, but had the bad luck of living in a time when there were several other extremely strong players, especially Honinbo Shuwa. In the first game of this encounter, Shusaku took two stones. Gennan, realizing that he had no chance of winning, left the game unfinished and started a new game with Shusaku taking Black. This was actually a great honor, because Gennan was indicating that Shusaku's strength was much greater than his rank indicated. 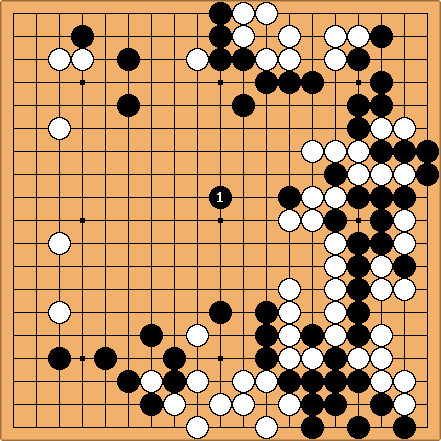 The first game on Black is Shusaku's most famous and contains one of the most famous moves in go history: the Ear Reddening Move. The result was a two-point win by Shusaku, despite an early game mistake in a new variant of the taisha joseki. The game is considered a lifetime masterpiece for both players.

They continued with three more games, of which one was left unfinished and the other two were also won by Shusaku. After the games, Shusaku headed back to Edo and upon his arrival heard that he had been promoted to 5-dan.

Back in Edo, Shusaku was asked to become the heir of Shuwa, who was to become the next head of the Honinbo house. But he refused, because of his obligations towards Lord Asano and his own family. After some mediation, the Asano clan relinquished its claim on Shusaku, allowing Shusaku to become Shuwa's heir in 1847. It was also decided that he would marry Jowa's daughter as part of the event. In the meantime, Shusaku and Shuwa played a famous series of 17 games in October 1846 to September 1847.

Later that year, Josaku died, and Shuwa became head of the Honinbo house. In 1848, Shusaku was officially recognized as Shuwa's heir, and in the same year was promoted to 6-dan. In 1849, he took part in the castle games for the first time -- as part of his rank and position now allowed. In the years to come, he would play a total of 19 castle games, winning them all. He also received his promotion to 7-dan in these years -- some say it happened in 1849, while others (and most biographies) list it as 1853.

The Clash with Ota Yuzo

In 1853, Shusaku played a famous sanjubango against Ota Yuzo. Although Shusaku was regarded by most players the second strongest player of the day, next to Shuwa, Ota was not so sure. Shusaku had many problems with Ota, and only in 1849 managed to reach tagaisen against him. However, Shusaku proved the stronger player and continued to grow during the match. 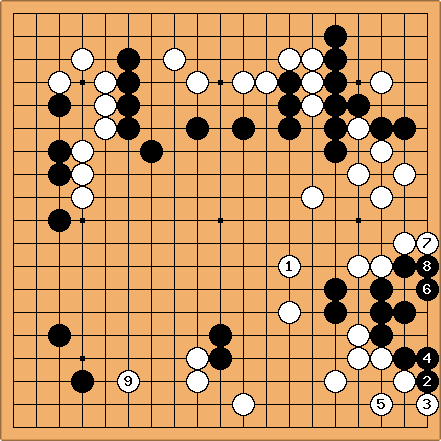 Only after 17 games, and winning every game as Black (except game 6 of match which Yuzo managed to make jigo), he forced Ota to a senaisen handicap. After game 23, in which Ota managed to get a jigo with White, Ota discontinued the series. Although spectators recognized Shusaku's strength as the reason for victory (rather than Ota's weakness), they also recognized Ota's tenacity for having managed to keep Shusaku at tagaisen for so long. The match became one of the most celebrated in classical go, with games seventeen and twenty-three appearing in many anthologies.

In the years that followed, to the dismay of all go players, it happened in more than one year that the castle games were not held. Shusaku did not play many games in these years, but one important match was a jubango against Murase Shuho, who was intended to become Shusaku's heir. Shuho, playing all games as Black, won the match with a score of 6-3-1.

In 1862, a cholera epidemic broke out in Edo, and several disciples of the Honinbo house caught the disease. Shusaku involved himself in caring for the sick, which resulted in his catching the disease himself. On September 3, 1862 he died at the age of thirty three.

The seeds of Shusaku's ascension to Go Sage were first sown by Shusaku enthusiast Ishigaya Kosaku with the publication of Kogyoku Yoin (1897), Shusaku Koketsu Kifu (1904), and erection of a large, memorial gravestone. In the books Ishigaya gave positive accounts of Shusaku's character and started using the term Go Sage when referring to him. In 1904, the publication of Zain Danso revealed a negatively biased account of Honinbo Jowa's intrigues towards securing the position of Meijin Godokoro, tarnishing Jowa's reputation.

The stew was allowed to simmer until 1951, when post-war Japan began looking back at characters who could be lifted-up to embody the traditional Japanese ideals. This notion carried through into the go world as well. So when the 10-volume publication of the castle games (see: Oshiro Gofu) was published reappraisal of Shusaku and Jowa could already be seen, particularly in the strong opinions of one editor, Segoe Kensaku. Although Jowa's playing strength could hold up, his character could not. But Shusaku's playing strength and character, under the auspices of Ishigaya's glowing accounts and Segoe's opinions, could. With his impressive castle game victories, famous sogo, and description of him as "the perfect filial son and pupil," Shusaku was lifted up to Go Sage.

However, as John Fairbairn stated:

The stories of Jowa's deviousness and Shusaku's filial piety have been replayed many times both as fact and as popular fiction. But they are about human attributes, not go.

Today, Shusaku's reputation is still somewhat inflated in the West, where most readers have access only to a limited number of texts. In Japan, where the go public has access to much more literature, a more objective balance has been struck. I would guess that the parents of any budding professional would love him to grow up like Shusaku, a perfect filial son and pupil. He himself would probably love to play like Jowa.[4]

There are 388 games given in the book Complete Games of Shusaku, but two are rengo and 38 are unfinished games. The following stats are from the remaining 348-games where the results were clear.