Size and safety of territory

Iago: For beginners such as myself, one of the big questions is to know if a territory is secure or not.

As far as I understand, the bigger the better for living, but there should be some kind of limits...

Here is a first attempt at classification by size, and my main concerns about it

If the territory is small, this belongs obviously to the realm of life and death.

Ex1: Black is playing to kill, and White to live.

Here the position is unsettled; the play at a is worth 7 points by miai counting. (See also the page discussion.) 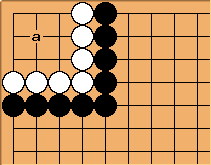 Ex2 : a 3x3 territory (ie 9 points). Black cannot kill because White can divide the space easily. If it is black's move, black can reduce by making seki.

This is discussed in detail at square nine in the corner.

TJ: Black can make seki by playing at a. White may want to play there first if there's nothing bigger. 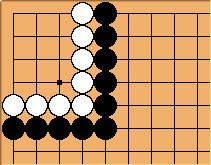 I think the limit between small and medium is around 6 or 7, depending on the shape (see Basic live shapes).

My first question: what is the limit between medium and big ? Or to be more precise, how much space does black need to make an alive group from scratch (and what shape ? Square like 5x5 or more like 3x8...) ?

LCzlapinski 3x3. So black would probably need about a 4x4 space to start with.

a and b are miai for life.

If White territory is too big (see upper), then it still cannot be killed, but it may be reduced by Black making life inside or Seki. I guess this is close to Shinogi, because this is where all my questions comes from !

TJ: An odd situation, for sure. I don't think it would happen like this...black can certainly live inside, I'm pretty sure even if White played first. But, shinogi should happen much earlier than this. A moyo is generally not totally walled off when ripe for invasion. Maybe someone else can show a theoretical invasion/defence here, but I think it's too unnatural to worry about. One side, almost surely, would have taken hoshi/made an enclosure around the corner first, and would have been pushing back at that rather odd wall, though. Anyway, not really answering your question, but I hope it helps some. (14 kyu)

Iago: Well yeah it is not natural (but maybe in handicap game ?)... my idea was to get a simplified situation in order to watch the Shinogi-kind fight (could be a 4x9 framework with holes in it), instead of a complicated large central moyo fight. the second idea would be to know if Black should invade a large framework or not bother with it, depending on the size, but it may not be the best way to take the problem... 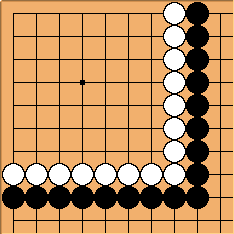 Ex3 : is this too good to be true ? White here has 49 points, and cannot be killed. Can Black reduce it ? and how ? What should White do to avoid that ?

Andrew Grant: Assuming good play on White's part, Black cannot invade this corner and live. White's walls are much stronger than they appear.

LCzlapinski: A dan thought the walls are too close for black to live against good play. The dan thought that it would be more interesting whether black could live if allowed two moves in the local area. So perhaps an invasion could be used as a large ko threat. 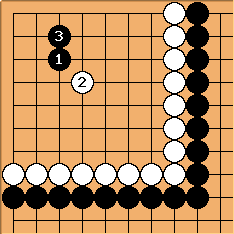 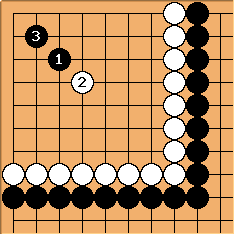 LCzlapinski: Another invasion attempt if white chooses the 4-4 point might be 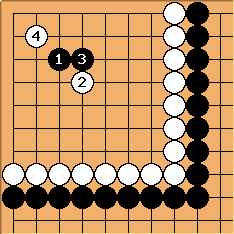 xela I'm with Andrew Grant on this one. Certainly it's complicated, but I don't see how black can live. The 'normal' 3-3 invasion works because if white tries to take away the eyespace, black runs into the centre, doing much more harm. In this case black has no chance to make eyes in the centre. Maybe some stronger players would like to show us the variations arising from this position (does this deserve a separate page?) 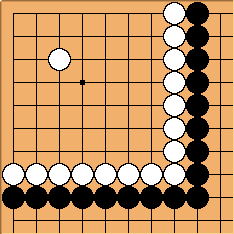 I've heard that with the white walls two lines further out, enclosing a 9x9 box, a professional recently managed to prove that black can live inside. But I don't know the details. 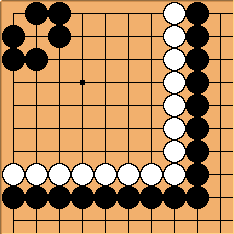 Ex4 : Black made 2 points, but took more than 16 from white, and still counting.

So this is my second question : how should both play in the Ex3 situation ?

LCzlapinski: In Ex3, playing the 3-3 point is probably best for either player. For white the 3-3 point claims the corner as territory. It makes an invasion difficult.

The main idea is that White wants to know if his territory is safe, to protect it from reduction if needed, but still not making unnecessary plays.

Charles One basic good point was made above: chances to invade generally should be taken earlier than these complete positions suggest. If an invasion depends on a cutting point or shortage of liberties created in the endgame, then in a sense it counts as pure tactics, rather than shinogi. Another point to make is that any algorithmic solution or classification would be too complex to be used 'by hand'. In practice one learns gradually about key points that appear much earlier in the game; and to distrust corners that look like 20 points or more.

Iago: Well now the page is a good example of beginner's misthinking and mistakes :)

Thanks everybody, now it's much clearer for me. And this name is better too; maybe we should link it in some way to territory ?

Charles It's linked from territory already: you can read this on the left-hand bar.