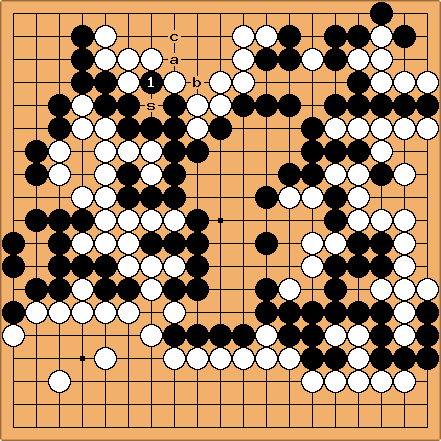 Taken from the same game as the endgame question in GTL Review 1558.

I didn't really look too much at it, but it's the sort of play I'd always make; White would respond by protecting the cut and that would be it. The player (obviously not taking my word as gospel :-) asked:

After a bit of thought, I came up with the following response:

OK. I suppose that what I mean is that this move prepares for a ko-fight which will start when Black cuts at a. The move itself is not a very big move (if White protects against the cut it was half a point in sente) , but the fight afterwards will be big. And it is a fight where Black has nothing to lose.

Consider what happens if White doesn't protect - Black cuts. White takes the ko, Black plays a ko-threat, White answers ko-threat, white retakes ko. Black plays ko-threat, White answers, Black retakes ko. This sequence continues, in principle until either side runs out of ko-threats or considers that the threat is smaller than the ko. If White ignores the ko-threat and fills the ko, Black can carry out the threat, which will be worth something.

Black doesn't mind white winning the ko if Black can play two moves in a row somewhere else. If Black ignores a ko-threat somewhere to fill the ko, White will still need to protect against the cutting stone, so Black can still respond to the original threat. In this situation, Black has more ko-threats than White, so he will be able to make a profit from playing a threat and carrying it through.

But, even so, accepting the fact that (if white doesn't answer) there is in fact a big ko, what is the value of this move (Black 1)? When should it be played? It is a sente move of very little value, but with a large follow-up. Maybe it can be said to be absolute sente, but the real value of it is only half a point....

Bill Spight: A Black cut at a makes a hanami ko. If Black loses it, it costs one point locally, but gaining more than one point with a ko threat is a plus. Protecting against the cut is normal.
As as sente, how large is Black 1? If White fills instead, let's call the count 0. After Black 1 - White a, by comparison White has lost one point of territory and one stone, but can claim 1/3 of Black's stone at 1. The net result is 1 2/3 points, which is the value of the sente play. (1 2/3 point sente kos are fairly common.)

emeraldemon: I just stumbled across this page, one thing confuses me: while it's true that black doesn't lose much by losing the ko, it seems he must win it many times to capture the stones: 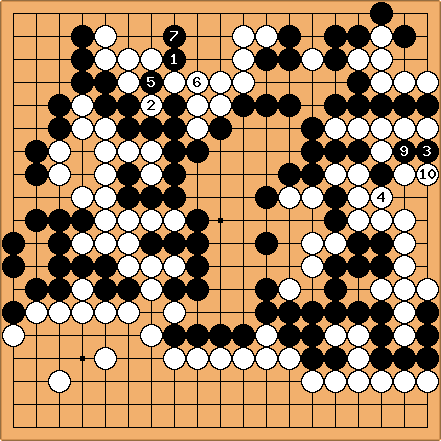 are ko threats, but white treats

as a ko threat. 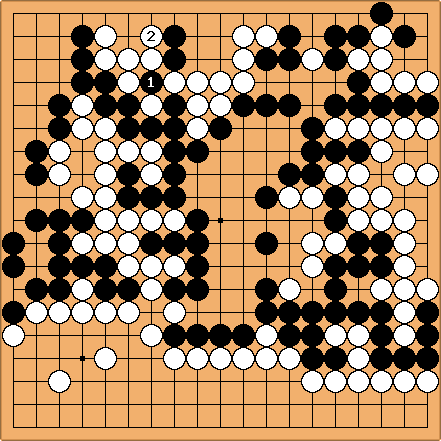 in this diagram, can black afford to fill in the ko finally? I don't think so, white can win the capturing race. Am I right about this? How many times must black win this "picnic" ko to actually gain anything?

fractic: If Black fills the ko here and white "wins" the capturing race it's already a gain for Black. Because if White has to actually remove the black stones she needs to play inside her own territory. See semedori.

emeraldemon: good point, thanks. I guess even if black fills after

in the first diagram, white has to play at 7, so there is some gain for black.