Ishida Yoshio in his Dictionary of Basic Joseki (volume 1 page 26, 27) uses this term to describe a flawless wall enclosing the corner from two sides. 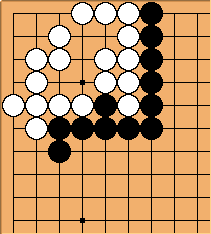 This position is the continuation of the nineteen point trick play.

Jasonred : Is the wall here really worth the 18 points?

Bill: Much more, as a rule.
Fhayashi: It's supposed to be worth much more than 18 points, but as a 19 kyu KGS player, I'm barely learning to use influence properly. So I suspect for beginner players like me, the 18 points might be worth more...
Bill: Yes, you do have to learn how to utilize thickness. So maybe this wall is worth only 30 points for you. :-) But thinking that way is a good way to remain a double digit kyu player. I don't mean to be rude, but while you are learning it is not such a good idea to cater to your weaknesses.

Doesn't that depend a lot on the global position as well, or does this apply considering on the position in the diagram?

I mean, for normal invasions on against the 4-4 point, the corner is far too small to justify letting a wall build up, but isn't 18 points big?

Bill: Not by comparison.

iopq: If you imagine this played in every corner, you can see that white can barely scrape up some territory on the sides and will probably be a hundred points behind. That would fit well with the 18 points to 45 points estimate. 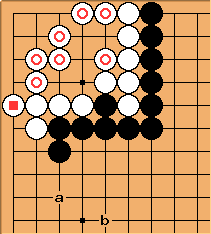 Pardon my ignorance, but I'm just wondering what a rough estimate of how many moku you would place on that (admittedly intimidating) wall's worth in these situations:

Bill: If we count that influence as 30 points, maybe we still count the wall as 45 points and take the difference.

Bill: I depends on how big and how close it is. Also, there is a bookkeeping question. Do we charge the overconcentration to both groups, or only to the second one? I am going to take a guess and say this wall would be worth about 30 points, charging both walls.

Bill: If they are Black stones, take off for overconcentration: 5 points for a stone at a, 3 points for one at b. If they are White stones, one at a can easily connect to White's group. Take off 5 points for it. A White stone at b can be treated lightly. I am not sure I would make any adjustment for it.

Hmmm... thinking about it a bit more, I realize that the situation is different. Because the wall is bent, it restricts White's corner group from further development, whereas a White side group would still have one avenue for development. Is this enough to bring the value up to 45? How did you arrive at the number 45, Bill? Is there some formula I'm not aware of, or is that just a quick assessment? Either way, it's still more than the 18 points White has...

Bill: It is true that it is not obvious how much a wall is worth. Rarely can you count it by local territory. It would be interesting to see what proper komi would be, starting from this position, as determined by professional play. I expect that it would be 30+ points. So, yes, it's a guess, but an educated one.

A center-facing straight wall is worth between 2 and 3 points per stone. Straight walls are relatively weak, unless they are long, because they are, in some cases, attackable. That makes them worth less than secure walls. Walls that face the side are worth more, and walls that go all the way to the edge even more, because they prevent a sente incursion such as a monkey jump or hane-tsugi, or an outside threat to connect. In addition, a wrap-around wall radiates influence diagonally towards the center. Adding it all up, this wall should be worth more than 40 points.

Another way of looking at it is that White has wasted 2 moves. White's position is worth 20+ points, since it has room to expand on the left side. If these 2 moves are worth 25-30 points, Black's wall should be worth 45-50 points. Black's wall is a bit inefficient, so we make an estimate on the low side.

Anonymous: By playing the same sequence on each of the four corners, you end up with a position where white can do nothing to invade the center. All she can do is crawling to get some territory point on the first line. This ends as a win for black with an 88-point margin (minus the komi). Thus each corner is worth 22 (88/4=22) more points for black than for white. Since white has 18 points in each corner, this means that each wall is worth 40 (18+22=40) points.

Hmmm. If you do remove those 8 stones and Black plays to contain White, then it looks like she can play inside and threaten seki, reducing White's territory to 15 points or so by semedori. So White has not wasted two whole plays. I have marked 7 extra

stones in the last diagram, and one

stone, which is worth a few points. So maybe 40-45 points is a better estimate by this method.