Mochikomi (literally 'carrying in'), a Japanese go term, refers to a tactical or strategic failure resulting in stones orphaned within the opponent's territory with virtually no aji, and in return for which no (or too little) compensation was obtained. Mochikomi of one stone is in effect a loss of one move and one point.

A simple example is the hasty inside play

a mochikomi. Black could for example play at 2, force White to defend at 1, and invade at a.

It goes without saying that stones are sacrificed and captured all the time in the game of go. The term mochikomi captures the critical distinction that such sacrifices and captures must be accompanied by adequate compensation, and that not getting such compensation--giving your opponent a "gift"--represents a failure. 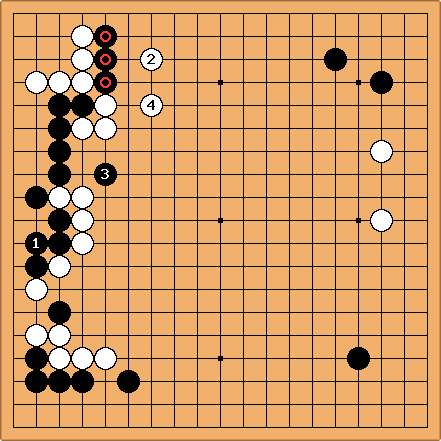 This position is from a Yoda Norimoto-Yamashita Keigo game played 2003-10-01 in the Meijin tournament. The three

stones in the upper left constitute a strategic mochikomi. Yoda presumably knowingly sacrified the stones, but the point is that he did so (was forced to do so) in a way which left virtually no aji in the position. 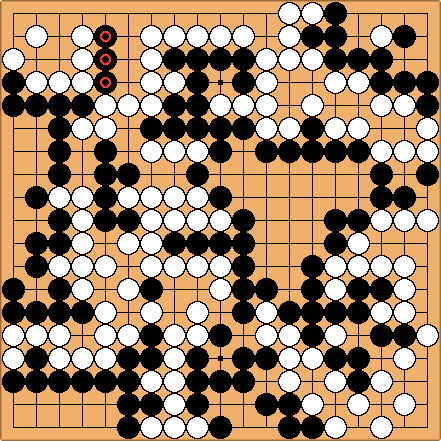 This is the final position. White won by 2.5 points.

was an oversight, and after

White has turned Black's stones into a mochikomi (one could say in English, has "orphaned" them; in Japanese, mochikomi ni shita). 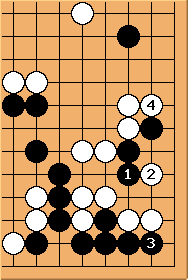 In this example, from the Nihon Ki-in's Hayawakari Yougo Shojiten, 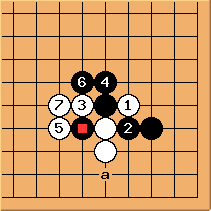 This example is from "Shin Hayawakari Hamete Shojiten", also published by the Nihon Ki-in. It comments that after the hamete sequence shown here,

is now mochikomi (mochikomi ni natte-iru, p. 164). (The hamete was initiated by the marked Black stone. The refutation is to play

. For extra credit, what is Black's follow-up move?)

The English phrase "failed invasion" is sometimes used for mochikomi, a translation which is accurate to the extent the term invasion is given a broader meaning than the Japanese uchikomi, to include a variety of inside moves, reductions, or even monkey jumps. For instance, to the extent

in the second diagram above is considered an "invasion"--which it might well be by some Western players, although in Japanese it would not be called uchikomi but instead oki (placement)--it is indeed a "failed invasion". However, if the term failed invasion is wrongly interpreted as being limited to a "typical" invasion--in the middle of a moyo, perhaps--the broader meaning given at the top of this page can be lost.