Look here for the closely related shape after the high extension. 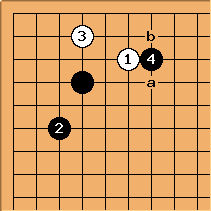 aims to develop a group on both sides. It is a recent Korean development which was introduced in the early 1990s and had its greatest popularity in the 2000s.[1]

The two common continuations are the hane at the top a and and the hane below at b.

Hane at the top 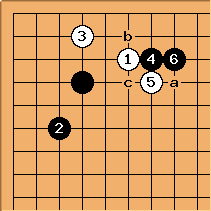 . White has experimented with different answers over time. a, b and c are the most common ones. a and b have been around as long as the joseki itself is; c was played little before 2008, but after that became the most usual variation for a few years. 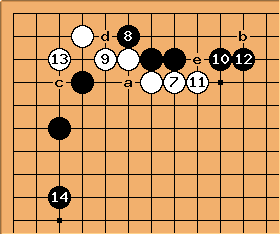 , this is the most common variation. White lives in the corner and is out to the center (the cut at a is not interesting).

Black has a few variations at his disposal:

. A more extensive group of variations, comes into play if

is played at e instead, which has been tried in the past; White can choose among 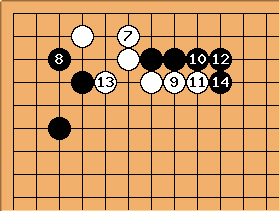 denies Black a base while White's own group is strong, so White has an option of attacking the Black top group later.

can be played at

as well, after which 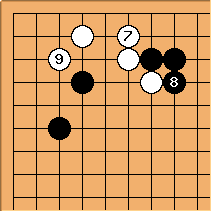 Black can also push up with

, allowing White to take the corner with 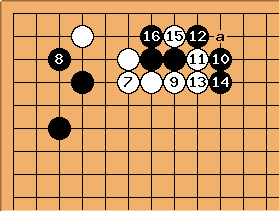 is the most common and most peaceful continuation. Black cannot have White cut him at a so... 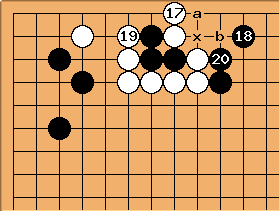 , but Black has played on both sides.
emeraldemon: A question about this shape: If black wants the outside, why play

? Why not just connect?
Uberdude Because white would then capture the 2 stones and be very strong, totally alive and have lots of liberties. By temporarily saving the stones black has a ko threat for later. Playing at a is a nice move that also creates an eye on the outside at b so black's wall there is a lot stronger and could likely live independently if white invades to the right of it and it gets cut off. If black played 18 as a solid connection and white captured the 2 stones the black wall doesn't have eye shape so is heavier and should white invade to the right of it and cut it off it could come under attack. Therefore black would not be able to attack the invader as severely. In the joseki position if white plays atari at a black would not connect, but block and fight a ko. If black wins the ko he saves the 3 stones inside and the white group loses its eyes. This ko is therefore very dangerous for white so a will be black's privilege. If black hadn't played 16 then white can easily fight the ko as black winning it does not affect the life of the white group. 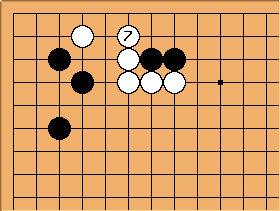 There is one major variation after

in the previous diagrams, which is

here. It was first[2] played in May 2009 by Wang Yao. As Black easily ends in semedori later, the corner is smaller than it may look at first sight. 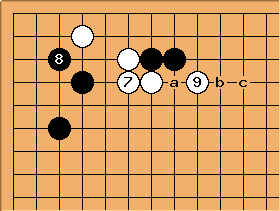 Instead of a, White can also play

here, or even at b or c. These moves are played less, and joseki has not crystallized out as clearly.

Both common variations after the hane below depend on ladders. 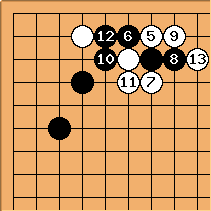 Timm/Dec.2014: According to Kim Mansoo, via Josekipedia, White chooses to play this way only if she doesn't like the other possibilities (and has the ladder). 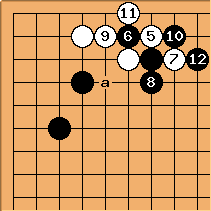 As White can later play a in sente, the group is practically alive as it stands.

even if she has the ladder. The attachment itself would depend on the ladder if Black couldn't have a good result in this case as well, and there wouldn't be a "ladder works for white" joseki. So I think a diagram's missing.

Timm/Dec.2014: This is locally very good for Black if he has the ladder (source Kim Mansoo) 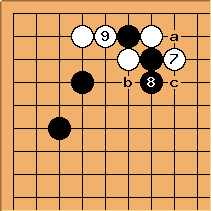 Timm/Dec.2014: Following up on my comment of a couple months ago. According to Kim Mansoo, this is the most common continuation to the hane below.

In this situation if the ladder starting at a works (for Black), he will play the sequence shown above and White can look forward to the ladder aji.

If the ladder doesn't work (favours White) then Black will play a ladder breaker.

b and c are also possible if a wall is useful, independently of the ladder situation.

Altogether it seems to me that the ladder aji does matter a lot when playing the slide-attachment joseki and that this wasn't emphasized enough on this page. 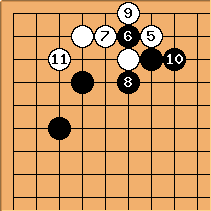 If White captures instantly with

, she is easily pressed low. Compare this to the previous diagram, where White still has the ladder aji to work with and ends in sente.

Timm/Dec.2014: This is still possible if White doesn't have the ladder and can't gain enough from a ladder breaker (according to Kim Mansoo).

Bob McGuigan: There was an extensive analysis of this attachment (after the high extension) in Go World issue number 87 as part of a series of articles on the Korean Style by Oya Koichi 8p. By now it's a standard move. Another good reason to buy the DVDs of Go World issues 1 to 108.

This is my first time commenting on a page, so excuse me if I'm unawares to the proper SL etiquette. In the second diagram, are there any good alternatives to the hane? If not how would one best punish this kind of deviance from the joseki; for example extending towards the center.

emeraldemon: I'm not so good at joseki, but maybe you mean a sequence like this? 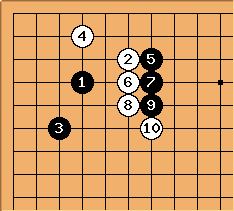 , because black will crosscut at

and the fight will (probably) be better for black. In this fight black may be slightly better off (and has certainly developed on both sides) but it seems playable. 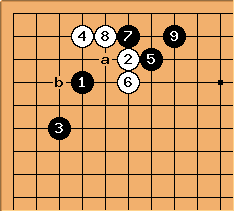 fractic: Black can play a hane at

white will need to make an empty triangle to connect.

miharbio: Yes, this is similar to how it played out in game; white responded at a to connect. Interestingly though, a dan player commented after the game that b would work "more actively" in defending the cut than a. 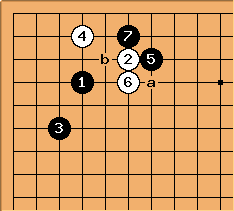 miharbio: But I was wondering what would happen if

was at a..., is the cut at b the best way for black to take advantage?

tapir: As the stones at

and at a are part of a current joseki line, this may will lead back to one of those lines. b as answer to it is likely wrong. My idea: 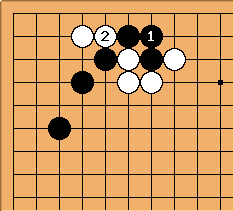 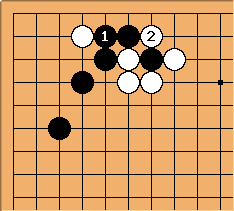 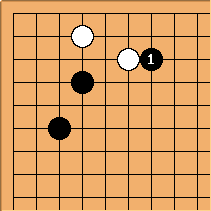 There is also Black 1 here (see 4-4 point low approach low extension, slide, attach), an old idea in the case of the one-point jump, but here really only played often from 1995 onwards. It is an attempt by Black to develop on both sides.

Bill: Actually, it has been around for a while. It appears, with variations, in Suzuki and Kitani's Small Joseki Dictionary, published in 1965.

John F. It goes back to 1934 in Japan in the GoGoD database. But then it did not reappear in games we have, except in some instances with more stones round about, until 1991 when it re-emerged in Korea. Mark Hall collected a lot of these games and dubbed the opening the Korean Joseki. We have over 200 examples, and it's still being played widely.

Tapir: If the 1934 occurrence is the same as in Mastergo Fukuda Masayoshi vs. Maeda Nobuaki, the circumstances are peculiar (there is a stone at 11-3) Is there any chance someone will show us, what Suzuki & Kitani's dictionary propose?

Tapir: That is according to Mastergo.