Sometimes when you look at the board after the game finished[1], you sense the beauty in this game. Here are some examples: 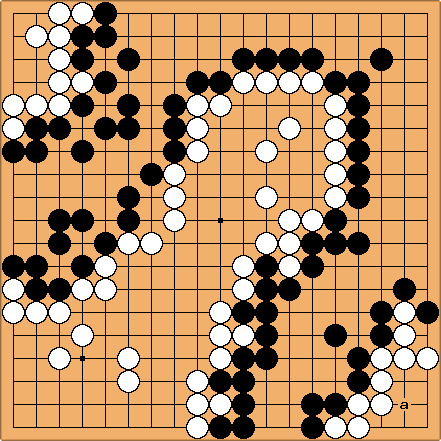 Dead stones are removed. You can look at the whole game for the actual result, but still there weren't much:). Do you think White or Black can claim territory inside the others?

No territory, but if Black plays at the point a, he can get a seki in the lower right, taking away 7 (or actually 6) points of White's territory. Andre Engels

Bill: It makes a difference of one point to White's territory, because White has enough liberties to capture the black stones. It's a case of semedori.

Charles Yes, my question was a little loaded. It turns out that there is yose to play, not just dame and teire.

Orcun Should I repeat that this is not the final position, dead local groups are removed? Take a look at the actual game in order to discuss about the low left corner. Again both sides have passed since there is no move that alters the final outcome. I appreciate your comments but I believe they belong to Beginner Game Sample 3.

Charles This might make a separate problem, in time. What you say about dead stones: yes, there are several phases at the end of the game that are gone through before counting. But mostly they are simply routine, at least for experienced players. Not so in this case, when we ask what was the last play actually worth points.

Andre Engels Normally, one first fills up the dame, only then are dead groups removed. Although in the actual game there is no points to be gotten in the corner (unlike here), white will have to play inside the corner during the filling of the dame, because otherwise black would be able to make the seki after a is filled in.