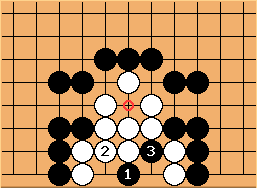 In symmetrical positions, one useful proverb is to play on the point of symmetry. White cannot defend both snapbacks (without loss of generality the left side is defended) and thus the only real eye in the White group is the marked point - White dies a horrible death. 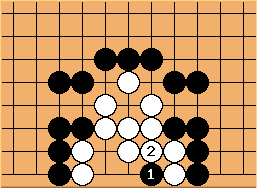 here is incorrect. After

, white is assured of the top and the bottom eye. 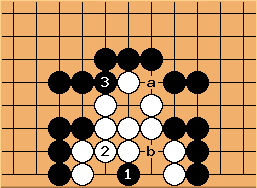 timh?: Is this another option for following up on

? Then white needs both a and b to survive, so black takes the other one to kill. 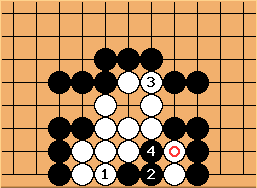 From my reading, while it does also do the job,

above gives W 3 ko threats to live in the future. (3rd threat is under the stones at the marked W stone). 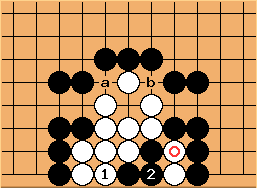 In the snapback solution, W only have 2 ko threat to live: the atari and the under-the-stones play. The creation of an eye at the top (at a or b) is no longer a threat to live. 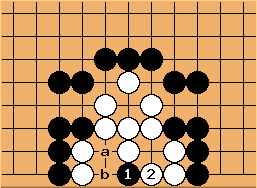 Anonymous: But couldn't White live by playing at

is self atari, B will capture the 3 stones now. If W then plays at b, trying to make an eye -

will be played under

, leaving it as a fake one. 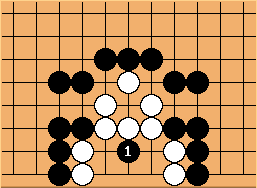 Moosky: *I'm not the poster of the diagram*. As far as I can read, this works. that's why W played there in the original version of the problem.

unkx80 But the original problem had a white stone at

ajisubarashii: It's true that all of White's stones are dead after

in this diagram. However, if it was White's turn to move instead of Black's, White can do much better than playing at

. Try the puzzle in the next diagram for extra practice.

unkx80: There are multiple initial moves that allow white to live. Which one(s) is/are the best? 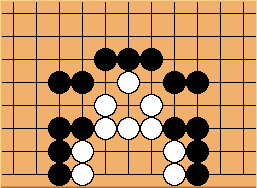