Teams: (add your name when you join the game) 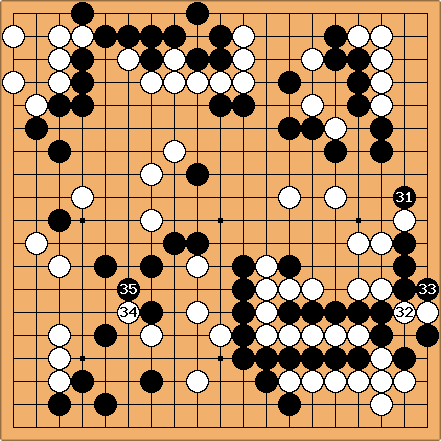 kb: Tenuki is warranted after a situation comes to a halt...

Hylebos: Very Clever Trap, I think this is the best way to go about disarming it.

tries to stay connected. Any white cuts can still be handled.

fractic: There have been several votes for resignation. Since nobody has made a move in a while I suppose there are no longer any objections. White resigns. 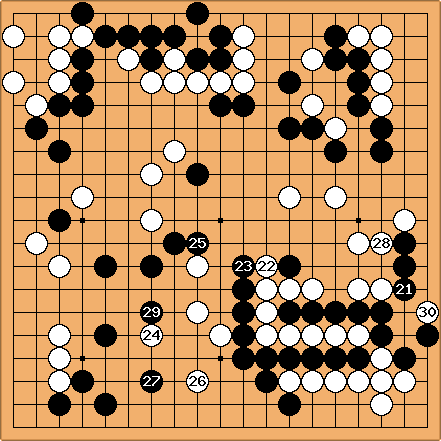 Mystery Go Player?: Keep cutting. The White group on the right isn't all that strong. But it's still strong enough that Black can't attack it directly. (Need to pick it off piece by piece)

Malcolm Trying to have a positive attitude

JG Stay connected. White has too many weak groups.

Batavia? Banzaaaaaaaaai!!!! (now black is going to run away scared)

Andy Pierce I freely admit I have no idea what I'm doing here. I'm trying to keep white's eyespace balloon smaller than critical mass, prevent possible eye formation on the edge, and help shore up black's connection to keep white from getting in some forcing moves and breaking through to the left by letting black's bottom left stones survive on their own if necessary. (also, I think there's some value in just making any local move, to pre-empt MGP from another tenuki *grin*)

fractic: Seal black in completely while eliminating some nasty aji.

Mystery Go Player?: The attachment here aims at both probing White eye potential and preventing a White escape out to the left. White must now pre-empt exactly where Black can attack next.

Holigor This does not hurt white. 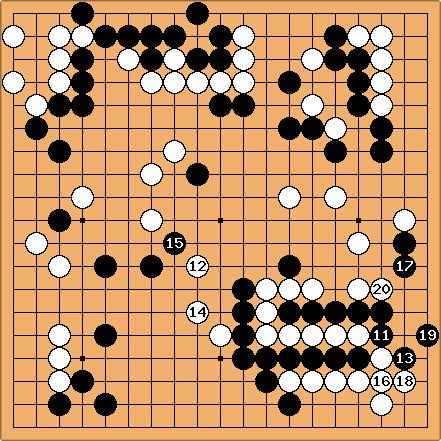 Mystery Go Player?: The upcoming fight looks uncertain. Black doesn't seem to gain much. That is why I feel that a tenuki taking the initiative here gives Black enough time to plan the battle.

Bob Threatening a deep invasion which looks like it is worth more than capturing the right.

JG Not sure about the timing.

strongeye: Just joined, hope this is ok. Anyways, I think this invasion is pretty big.

Mystery Go Player?: There are plenty of battles on the board right now. The trick is to use the correct aji to meet one's own goals.

Dieter: This ponnuki was really on the board (rubs eyes)?

Batavia?: Now we need to make life. should have captured black earlier 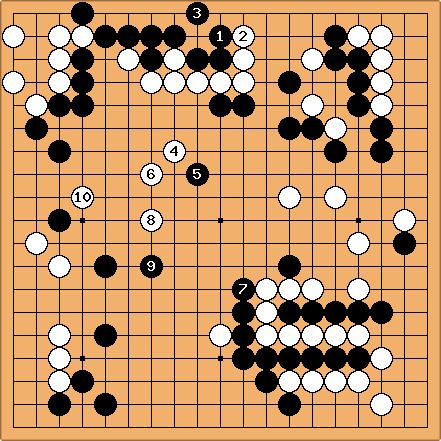 Andy Pierce: I couldn't figure out whether

or not to make white's eye false without giving white a lot of forcing moves on the top. Anyone have thoughts on this? For what it's worth, black needs to get something here, but I don't think black has enough strength in the middle to pull it off.

Hylebos: Don't want to get closed off at the top.

kokiri: it's getting nasty

Mystery Go Player?: Pushing from behind... (seeing where White's strengths are before attemping the anhialation.

Dieter: Wanted to sacrifice this group in the first place, but now ikken tobi can't be wrong.

fractic: I have no idea what the proper shape is in this position. This should at least help the group a bit. 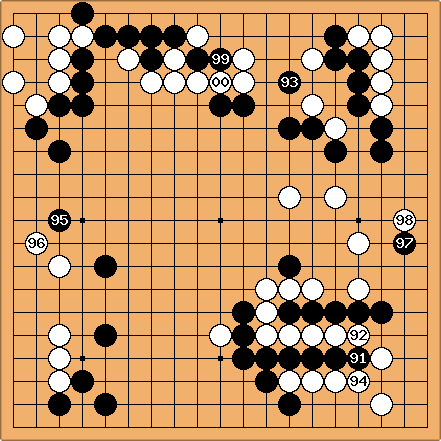 Herman Hiddema: There has been a lamentable lack of play on hoshi points. Lets fix that.

Mystery Go Player?: With the main intention of Black's wall building fullfilled, the aji of this move's area combined with the threat to White at the top means that this may be an important move. Is it urgent? Possibly not. But I can see a vicious attack on White, and I wonder... who else suffers from the same "delusion"?

fractic: This move is huge and pretty much double sente. The top can wait.

unkx80: After seeing one move after another that will make me cry "OMG", I don't really know what to do.

Dieter Black's tenukis were no lost moves. The game is not over.

fractic: I don't really have a choice. 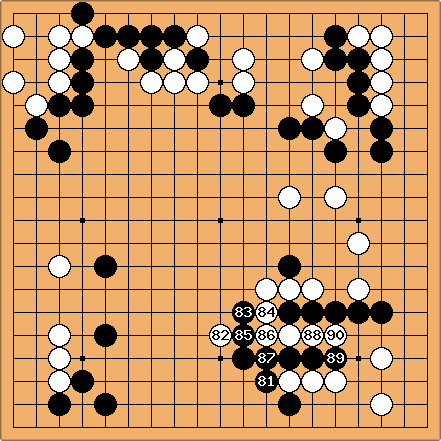 Mystery Go Player?: It seems urgent to seal the bottom.

Tamsin: Id have played here straight away without 84 first, but I`m going to do it now anyway.

in this line, but I still think this ends badly for white.

kokiri: well, it looks like my prior choice of move was very unpopular :P

fractic: I'm not sure I like where this is going but backing out now would make a lot of earlier moves look bad. 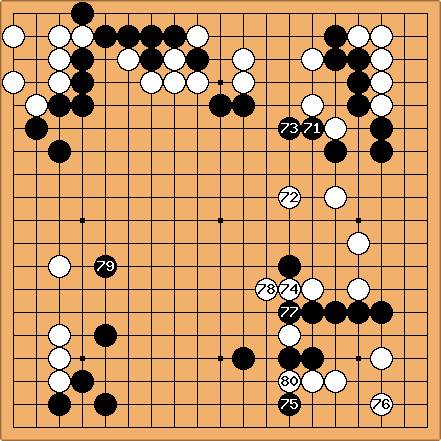 fractic: I think there are plenty of weak groups around, including this corner group.

Mystery Go Player?: A bit slow perhaps, (bigger moves around)... but I think it necessary to strengthen this territory splinter. Semi-sente perhaps --

Tamsin: The side group could easily get into trouble, but the hane is too soft given that Black`s bottom could swell, so let`s extend, fight, reduce and see what happens. 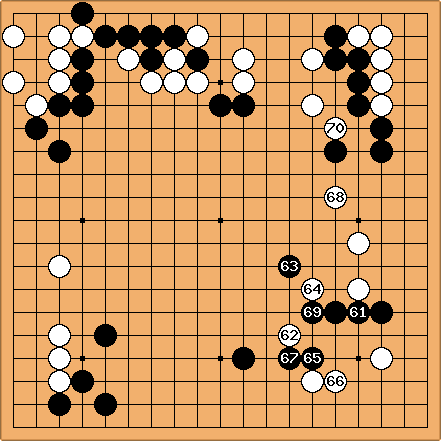 ThorAvaTahr: This could be a shape move... but probably it is just bad :)

Tamsin: This is going to get fighty! Yay! Never wrestle with a pig?????

Mystery Go player?: Black is in trouble. Life (or escape) is needed. This peep looks to isolate the corner or cut through in a connecty sort of way. If you don't like it, don't get in situations like this... :-/

kokiri - I keep changing my mind.

kb - Cutting right through a knight's move is very big

, Black has a chance of limiting White's ability to extend out with the White stones along the right side... OR potentally capping White's extending

stone whilst extending on the influence of Black from Black's shape at the bottom. ♪♫ ...is it time for a cutting fight? ♪♫ 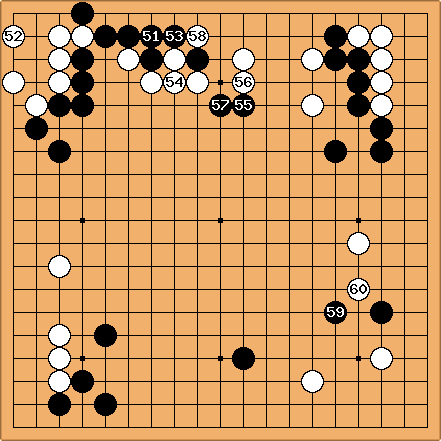 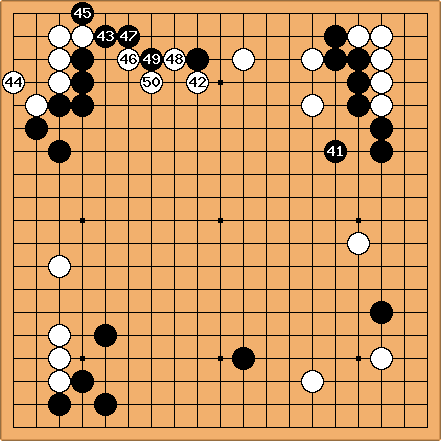 bob? Hmm tough choice. The goal is to overconcentrate black in sente and then ruin his territory with the group on the left. There is a net if a crosscut happens. I played the stone on the left high so it has plenty of room to run.

ThorAvaTahr Wow so much to do on this board.. :)

fractic: living in the corner.

Dieter: May the force be with you.

gos a long way towards settling the top while threatening e17.

ThorAvaTahr If, in a desperate attempt to find an elegant solution, I do a move that is just plainly wrong, than I am sorry to my team members.

to another team member) 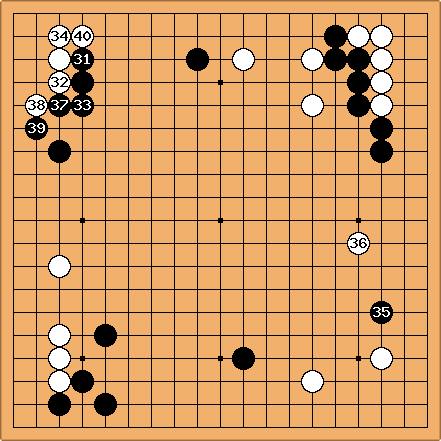 ThorAvaTahr How does white feel about this move? :)

Herman Hiddema: Finish what we started then :) 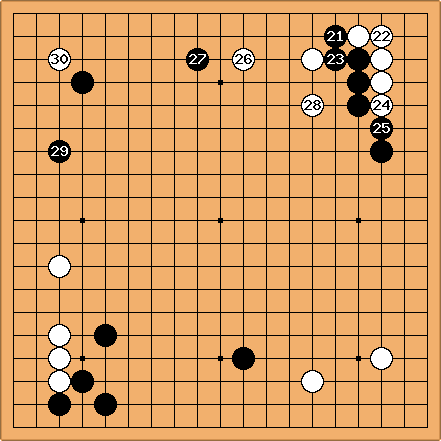 Hylebos: Hopefully this move isn't as unusual as move 6.

Hylebos: Hopefully this will not end in tears.

ThorAvaTahr: This looks like a nice opportunity to use the thickness of the black wall

fractic: If black were to play one space above this stone white's shape would be weak. Playing there would be heavy though.

MrTenuki: It's now or never... 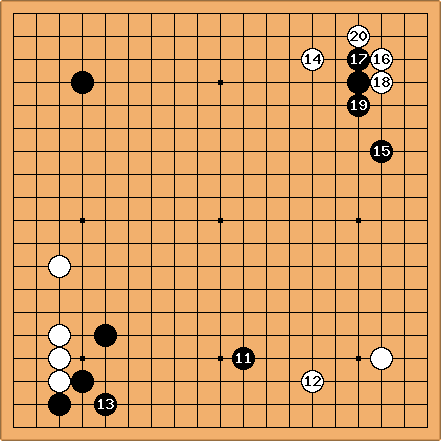 Bob?:Threatens an invasion of black's very loose moyo while securing some points

unkx80 Can't resist playing a move even though I am out of town right now. =)

MrTenuki My second local move of the game. 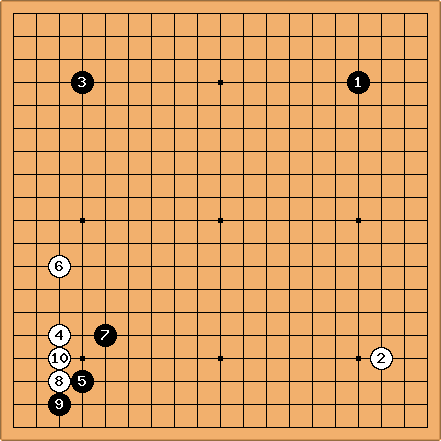 kokiri: I was gutted i missed the last one :)

Hylebos: All your base are belong to us.

Karl Knechtel: Can't afford to get pincered; may as well start emphasizing the outside if White doesn't want it.

MrTenuki: Instead of playing elsewhere, I guess I'll try this.