Cutting right through a knight's move is very big

The proverb cutting right through a knight's move is very big is related to the idea of the split shape.

BobMcGuigan: The split knight's move, as in the following diagram: 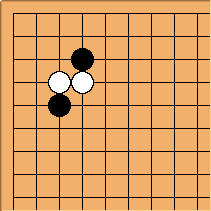 is usually a very bad shape for Black, but it often happens as a result of a ko threat that was ignored (see e.g. There are No Ko Threats in the Opening). This shape is also discussed in Four basic shapes, part of a book by the chinese pro Fan Hui, where it is referred to as a ripped keima.

Black might have the knight's move shape already in place, and a ko starts somewhere else on the board. Then White might play

as a ko threat, Black might end the ko, and White could then play the stone marked with a square.. 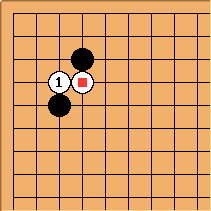 Karl Knechtel: The keima (knight's move) usually provides a reasonably fast way of extending and in general won't be cut. After a strike at the waist of the keima, cutting on the other side isn't possible immediately because the opponent can be caught in a ladder:

(Note that the actual "strike at the waist of the keima" proverb refers to the situation where there's a supporting black stone - see the page for details. It came to mind, though.)

Of course, with two moves in a row locally, Black can plough straight through. The idea behind my proverb is that doing so is usually a very big play in actual game situations, and thus

is sente and a big ko threat in many cases. 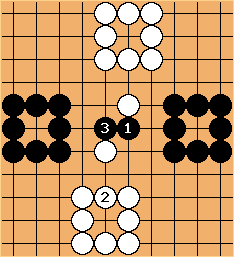 When Black is permitted to cut, the damage is evident, though contrived.

While locally the keima is quite strong, it takes only the marked black stone to ensure the cut - Yomiuri Shimbun's English language The Magic of Go column #179 is