kb: There hasn't been an ongoing game on Sensei's for quite a while, so let's start a new one! Anyone is free to make a move, but once you play for one side, please only play for that side. Also, give others a chance to play before playing the move yourself. Feel free to make a comment when you play the move.

Discussion of moves in /Discussion.
Review in /Review. 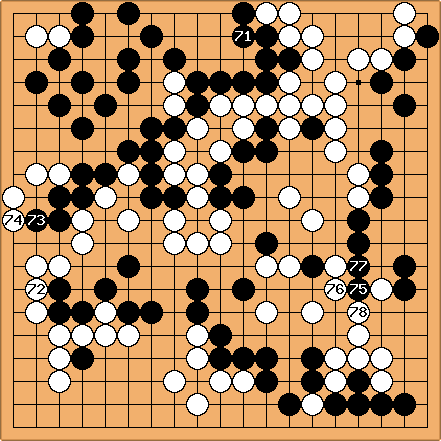 ThorAvaTahr: I just don't want trouble in our biggest area.

kb: Threaten some rather nasty things. 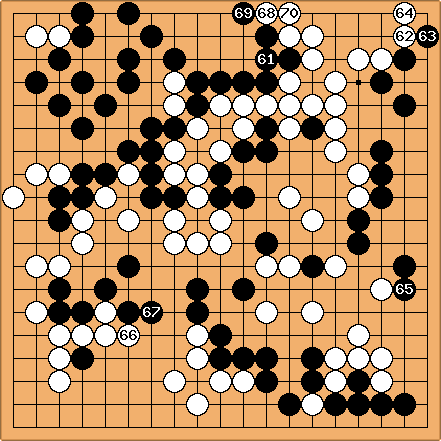 JG: May be the right time for this move.

ThorAvaTahr: I am not quite sure whether this is the largest point on the board, but well let's believe black this time :)

: Dieter: I wanted to make the next move. Too bad.

: ThorAvaTahr: Perhaps black will think this is sente ;) 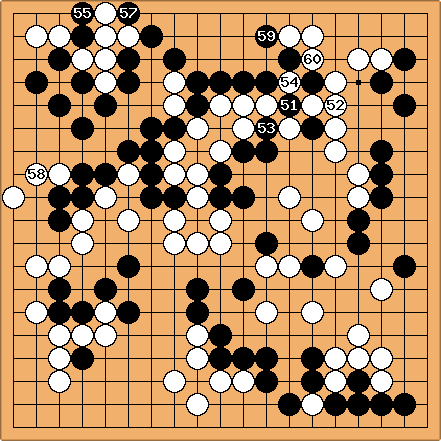 Dieter: Master happy but not sure is master.

ap: keep on keeping on

At 151, connecting the ko. Malcolm: I reckon White can win this way. Sorry if I'm wrong!

fractic: If white ignores the threat we have to make good on it.

Herman Hiddema: Back to playing endgame, then 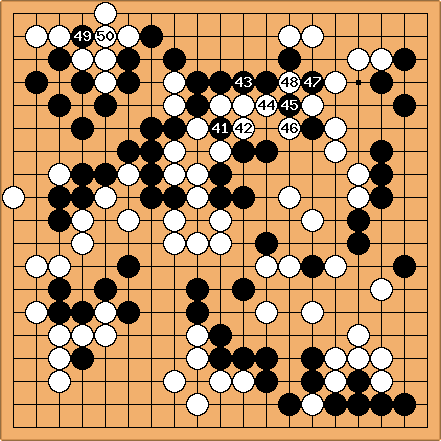 LukeNine45: Three outside liberties, three holes to fill, no?

Dieter: Master know what he doing.

LukeNine45: Don't look a gift horse in the mouth...

fractic: An attempt to salvage something.

ap: plenty of venom in this sting

MrTenuki: I think White does have to respond to this... 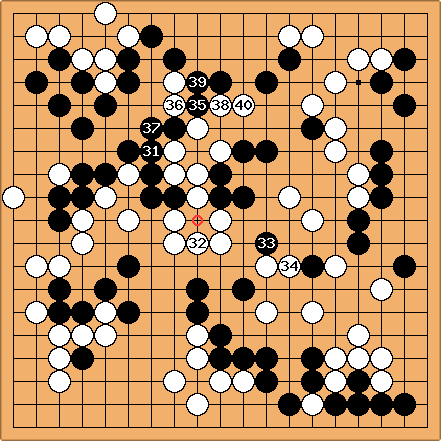 LukeNine45: Keep it all connected...

fractic: Saving the stone is important. 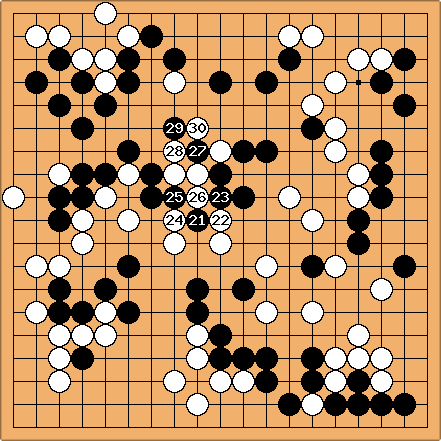 Andy Pierce: I'd like to keep going for a bit, but I think white has a substantial lead.

LukeNine45: Stay connected. Now that black is open at the top it feels close again.

kb: This looks like it gives Black the most aji and the most points.

kb: Close off territory in sente

MrTenuki: Looks forced to me... 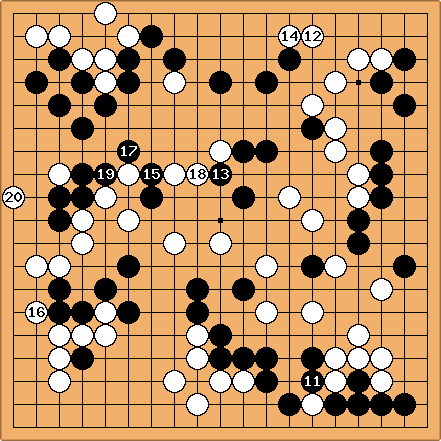 JG This move should earn points even if black responds locally.

unkx80: So many big moves on the board. I don't know where is the biggest.

LukeNine45: Maybe black has to give up some points here to avoid really bad aji?

unkx80: Just to get the game going.

JG: Black is thick outside. Monkey-jump may be well-timed. 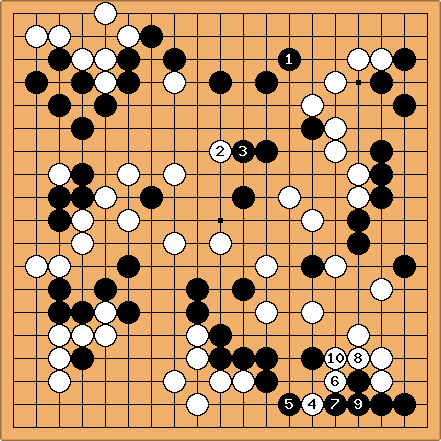 kb: Defend, this is large.

LukeNine45: Maybe we can make enough trouble here to catch up.

gauss: Looks like I need to remove a liberty from

while defending the weakness on the bottom.

LukeNine45: I don't think the sequence from 4-8 lost us more than it gained us. 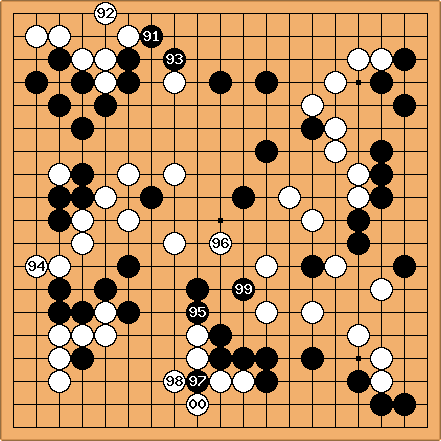 Herman Hiddema: Will black let us connect under here?

unkx80: Of course Black needs to connect the dragon back. But before connecting, I want to see how White responds to this.

MrTenuki: Go ahead and take the two stones in gote.

fractic: Black has to connect.

Herman Hiddema: I'll take this then. 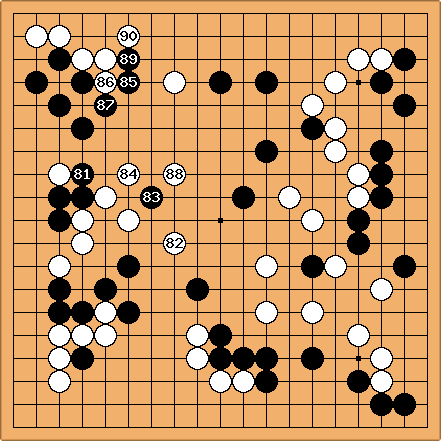 golearner: Move out? Which way is out?

kb: Make a feint to the east while attacking in the west

Ryzours: I think this works. (don't ask me what I mean by that, I'm just a kyu.)

gauss: This seems like the way to punish the tenuki. 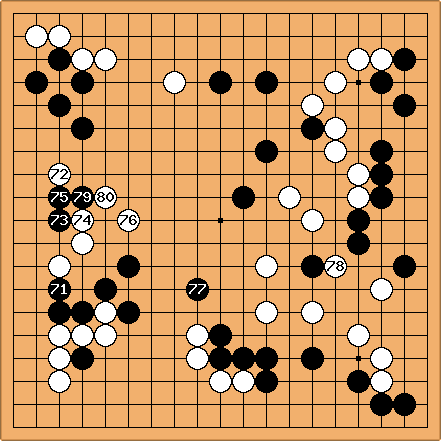 gauss: I'll jump in. This move looks funny, but it seems better than the alternatives.

ThorAvaTahr: LukeNine45's first part of the plan worked, now for the second part

Bill: The spot on the left side, I think.

Jamal: Blocking is unreasonable, so try for influence and escape into the center.

Andy Pierce: I guess this is the idea here.

Herman Hiddema: This side is starting to feel weak :) 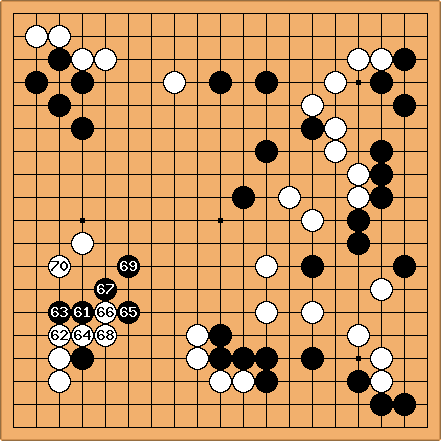 Jamal: This is an important shape point for both sides.

ThorAvaTahr: Cut! I dare you ;)

LukeNine45: No connection possible, so give black bad shape before stabilizing this stone. 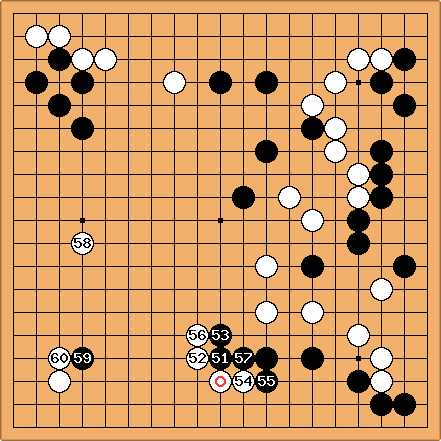 fractic: Letting two groups be enclosed would be too much.

Jamal: Hane from an attachment

Tapir: The only response I can imagine.

Bill: My turn to make an overplay. ;) 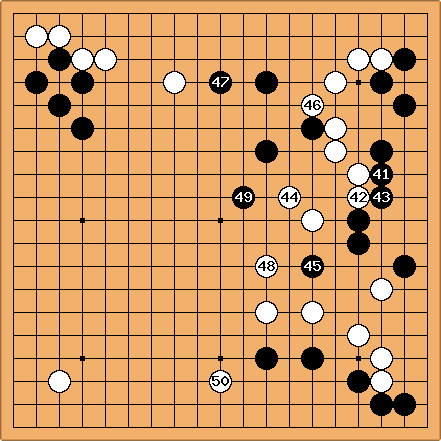 kb: Time for Black to assume the Party Escort "Submission" Position. (For those of you who don't know what I mean, it's a reference to the video game

fractic: I don't like having to make this move, but I don't see any alternatives.

golearner: Or one to the left?

kb: As much as I don't want to play here, my gut is screaming honte.

ThorAvaTahr: Why (oh why...) did I choose the white side?

Herman Hiddema: Why (oh why...) is everybody still playing there?

but I couldn't decide and was happy ThorAvaTahr beat me to it... ;) 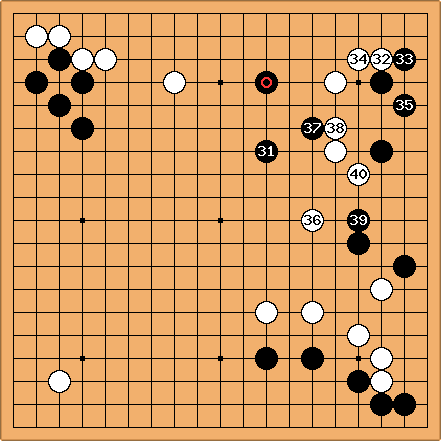 LukeNine45: Try to settle quickly. (This move under the theory that a bad move is better than no move at all...)

Ryzours It'd be so nice if white could connect his two weak groups.

unkx80: The game has come to a critical juncture, so I think Black must be prepared to make some risky moves. This move is in preparation for a battle ahead.

Andy Pierce: This isn't the move I had originally envisaged for black on this side, but I think this is a reasonable compromise between pressuring white (to keep sente) and removing bad aji for black.

ThorAvaTahr: Can these strong black stones help white get stronger in sente? 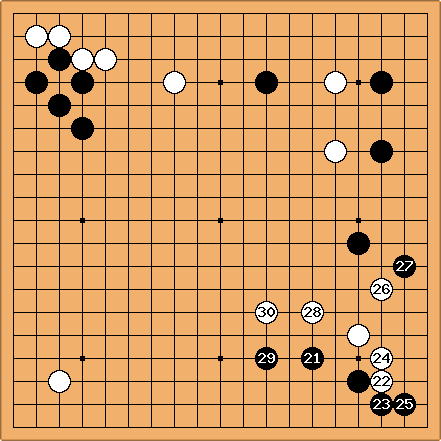 fractic: I think the lower right is the most urgent area. The black stone at the top is still light.

tapir: White needs a base.

tapir: Might be not good... but after 22 somehow natural.

LukeNine45: Get out, try not to help black. Could some DDKs make a play for black? White is losing! ;)

fractic: Trying to keep the pressure up.

Ryzours: White gets out, no need to worry, the situation is not that bad (but I think it is bad, alright). 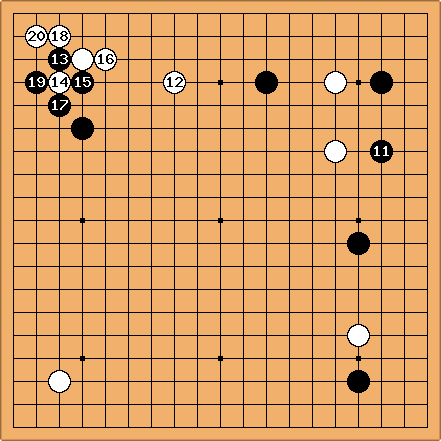 Jamal Trying to decide what is bigger, the corner or the top

LukeNine45: Extend from a cross-cut, try to maintain a relationship with

. (No clue how close to joseki this is.)

kb: Not much point in waiting for someone else to do this :)

Herman Hiddema: Well, this is rather obvious too, might as well play it and make a new board :) 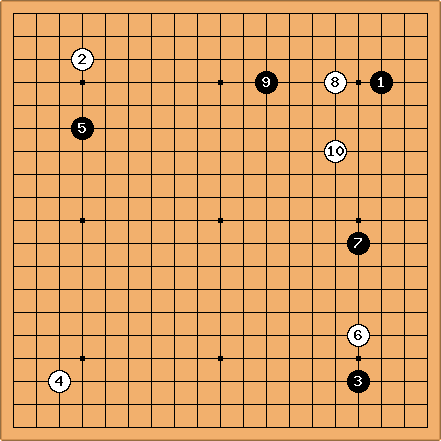 kb: I flipped a coin between the star point and komoku, and well, here's what turned up.

PurpleHaze: High because the other white stones are low.

Dieter: Difficult to discuss a move without giving away what's coming. So I'll suffice to say I have my reasons for this move. And if

is wrong, then that statement deserves a page on its own here.

Jamal: Time to escape and now black can play something on the top right corner