Invasions on the Side 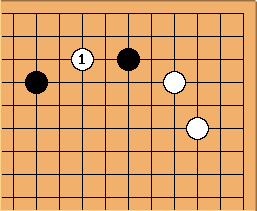 , white invades a position on the side.

Herman: There seems to be general agreement that the old material (below) is not what is actually called an invasion. There actually is all sorts of material on side invasions, but right now it is hard to reach. I am going to rewrite this page, and reorganize that material, to make it more easily reachable.

In this example[1], White does not want Black to complete a moyo by playing on the hoshi point on the top. Therefore, White wants to play so as to create a base on the top. Now, there are several common sense Go-proverbs which indicate where to play: "In a symmetrical position, play on the point of symmetry" may be the most applicable here. The third line underneath the hoshi point is a point of symmetry, and a play here is as far away from either thickness as can be. White should play on the third line, to settle the group here as quickly as possible.

If you are skeptical about the proverbs, then consider the following logic: by playing at

In general, when carrying out an invasion in the opening, you should leave yourself two ways open to create life - this way you are sure that you will have a stable group. Having a weak group from the beginning which your opponent can attack at will puts you at a great disadvantage for the rest of the game. Later in the game, you can keep the 'run into the middle and connect with another group' as one of the two options, but in the opening, you are normally better off playing a bit safer.

As a final note when considering an invasion, you should also consider the result if your group lives small, but gets shut in while your opponent strengthens himself on the outside. Not all invasions, even the 'successful' ones, are optimal play. Reductions from the outside can be as effective, but are always less dangerous.

[1] The play shown is an example of a wedge. The possibility of a wedge play in any space at least nine lines wide (see wedge - nine lines or fewer) means that the term invasion is usually restricted, when applied to plays on the third line. It makes sense only to call such plays 'invasions' when the space is at most eight lines wide. Something about this at wedge variants and on the wedge path.

Bill: I would not call this an invasion, either. What's to invade?