This page describes the 3-3 invasion that may occur after the 4-4 point diagonal attachment joseki. 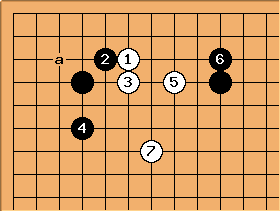 There are several 4-4 point diagonal attachment josekis, but they are all similar, so we shall simply use this particular sequence as the reference joseki. 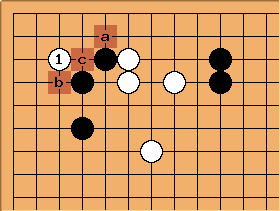 There are three common answers to the 3-3 invasion at 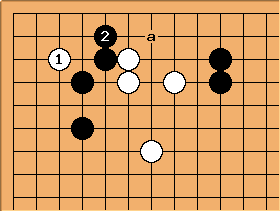 Note that the descent at 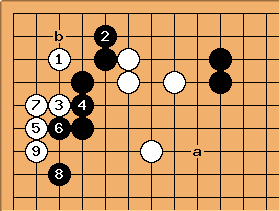 and the descent at

, Black can look forward to an attack at, say, a. Black will decide how to continue on the left side later. Note that

is also seen at b.

According to some Japanese books, White chooses this variation when White wants to live in the corner "tactfully", without getting the weak group on the outside into trouble. So when it actually occurs in professional play, one can expect that fighting considerations are already involved. 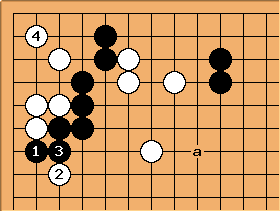 before answering in the corner at

. Note that the Black stones on the left do not have eyes yet. This aditional aji provided by

can assist White in settling the center stones. 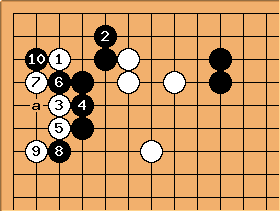 This is a second, but longer, joseki after 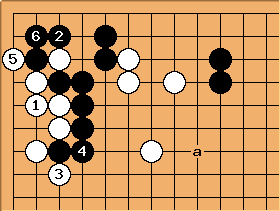 Again, Black has a very strong wall. Because Black has firmly occupied the corner, Black's position is even stronger than the previous joseki. Just as before, the outside White stones are very vulnerable to an attack at, say, a.

NormanP: Before the 5-6 exchange, is black unconditionally alive in the corner? 38 Basic Joseki says that he is alive without this exchange. But it seems to me that a white play at 6 would deprive black of two eyes in the corner. In the present situation, black is very strong, so playing this way would not help white. But maybe white will build up strength in this area later in the game.

Sverre: Black will answer 6 at 5, and even if White squeezes Black gets an eye at 6 and another to the right of 2. 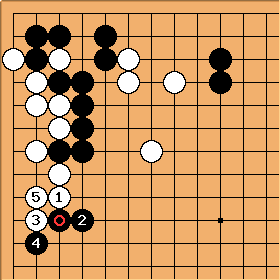 Assuming a typical position with an extension at

, then a common White sequence is to settle his group with

Hyperpapeterie Since Splitting Attack 2 gives up a fair bit in the corner, relative to Splitting Attack 1, and also reduces the chances for a counter-attack against Black's main group, I'm wondering what the compensation is, and when it should be played. 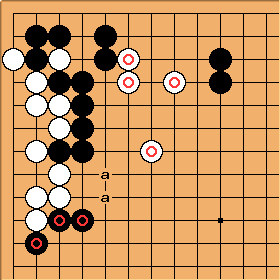 The two things I think I see are that the marked black stones are subject to an attack since they are cut off from the corner, and that if the marked white group is in trouble, the moves at a may be helpful since they threaten to connect. If that's right, are these considerations often sufficiently important to justify this variation? 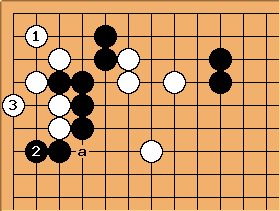 Another common variation is for

above to play at

here in the corner. However, White is sealed in at the side, but Black has a cutting point at a which may need defending. 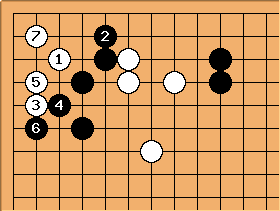 is also sometimes seen. A typical joseki is up to 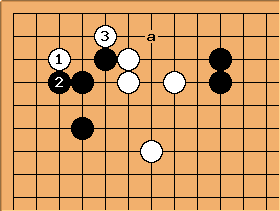 As mentioned, the block at

minimizes the loss of territory in the corner and the side, but allows the hane at

, White will find it very easy to make eyes around a. 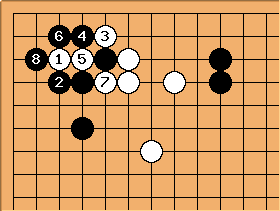 One of the josekis. Black secures as much territory as possible. 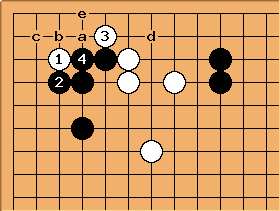 here, then White can tenuki. There are two follow-ups: White a, Black b, aiming for White c; or White d, Black a, White e.

According to Intermediate Level Power Builder Vol 1 when White is not yet secure, White should tenuki here rather than making the White a - Black b exchange because otherwise a peep by Black at d destroys White's eyespace. 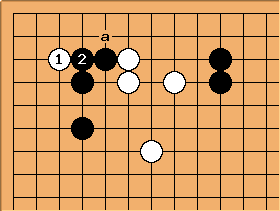 The good empty triangle at

is a compromise. It does not allow White to get the hane at a, but leaves the corner open. However, it is also not easy for White to immediately activate the

stone. Therefore, it is usual for White to tenuki and treat the

exchange as a kikashi. 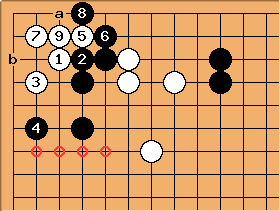 It is possible for White to live, but first

seals the side, second

reduces White's eye space, and third the moves in the vicinity of the marked points are sente, so the White stones on the outside become very weak. See also this discussion

http://www.lifein19x19.com/forum/viewtopic.php?p=207158#p207158 to know how can white live by exploiting the outside weakness if black want to kill without the sente moves

siowy: How does White live when Black plays 'b'? Why are the marked spaces sente? Can someone show a specific sequence? 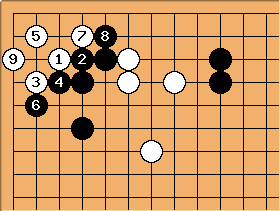 This variation is also seen. In either case, the idea is to make it unpleasant for White to make life on a small scale in the corner. 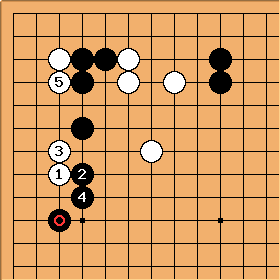 Therefore when Black plays the good empty triangle, White may choose to see the 3-3 move as a kikashi. Assuming this typical position where Black has an extension at

, White may aim for this sequence later, for making larger life or destroying the side area.