Guzumi (グズミ) is a Japanese Go term, meaning a bad-looking shape that is good in context, usually used for a move making an empty triangle at the apex (

) or a square dango of four stones (

). For further examples of this, see good empty triangle. 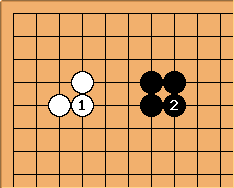 Tamsin: I`m guessing a bit here, but I suppose it would be 愚隅 in kanji - meaning "silly corner", which is what an empty triangle is. If this is so, then "guzumi" refers only to the shape, and not to the fact that it can be good in some circumstances.

John F. Japanese etymology doesn't work that way. Characters are often added whimsically to existing native words and become a kind of folk etymology. Sometimes many versions exist, as is the case with shichou (one kanji reading means 'four birds'). But this particular can be booted out of court straightaway as (a) sumi means corner in the sense of an area (a nook) and not a shape (cf. kado), and (b) sumi is a pure noun but the -mi here represents a verbal ending from guzumi, which makes the definition at head slightly inaccurate as well. The use of characters for this is rare but if it happens the usual choice is 愚図む anyway.

See the Guzumi/Discussion page for more on this, but I'll add that another plausible (but still speculative) route would be to trace it back to the old and probably original meaning of kusumu, be plain, with the g- variant adding negative overtones. Or it could be related to guzuguzu, a mimetic word used of sluggish movement.

Tamsin: Thanks John! I was hoping you would set me straight on this one, as I have been wondering about it for a while.

usagi: What is the kanji for guzumi? Regarding shicho, it is 征子, which for Japanese has an Onyomi reading (i.e. a reading which is based on the sound of Chinese words). There are two reasons for this; One, it's a compound word, which AFAIK has an Onyomi reading 95% of the time. Secondly, because it's a term which is borrowed directly from Chinese - ladder in Chinese is Zheng1 Zi which is the pinyin for the above two characters. In this case we may assume the meaning is exactly the same as in Chinese, as it's obviously a loan word. Zheng1 means subjugation, the etymology is to march straight ahead (and conquer). zi essentially just makes it a noun. I mention this because I always though the same sort of logic applied to a word like guzumi. I note that the Chinese term for empty triangle, 空三角 (Kong1 San1 jiao3), and the Japanese term 空き三角 (akisankaku) is essentially the same. I therefore propose that the Chinese term (Yu2 San1 Jiao3) should be used, with an Onyomi reading. Unfortunately I just realised I can't find the proper Chinese character for Yu2 anywhere, so I can't propose a reading for Japanese. I can pretty much say it wouldn't read "guzumi" though; so, the actual etymology of guzumi remains a mystery to me. Anyways I don't really know Japanese or Chinese, ask John F. about that, I'm just musing.

Anonymous: For the kanji for guzumi see the last sentence of John's post above,