Here are some positions to help you practice not making empty triangles. 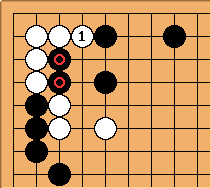 threatens to capture the marked cutting stones. How can Black best save them (which is often an urgent thing to do). 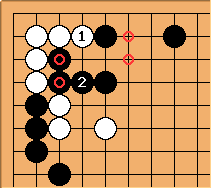 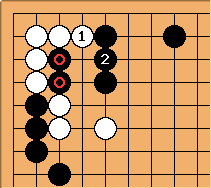 The bamboo joint is a more efficient shape to keep the important stones connected.

Enfors: Care to elaborate on why the bamboo joint is better than an empty triangle in this case? I don't understand.

fractic: In the empty triangle diagram there are more weaknesses in Black's shape. For example the

marked points could be troublesome. The bamboo joint doesn't leave such weaknesses.

Enfors: Sorry, but I still don't understand (I'm new, can you tell?). Why are the

Lightslinger?: I think I can explain why the bamboo is more effective. The bamboo joint is a virtual connection, meaning the four stones cannot be separated by your opponent. The empty triangle is not the best shape under most circumstances because it's inefficient in terms of liberties (Not to mention other reasons...) 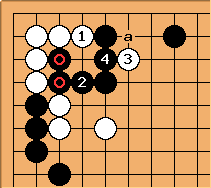 fractic: If when White plays

is a complete waste and Black has been forced around. White a would threaten to connect underneath so Black could end up in trouble. If Black doesn't play

White will play at that point and cut Black. White doesn't have to play this of course. But the fact that it's possible gives the Black position much more bad aji than the bamboo joint.

Enfors: Ah. I see now. Thanks. 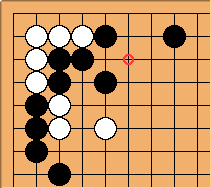 Solnox?: I am a begginer too, and my intuitive play would have been connecting with a small empty triangle. Can someone explain why this is bad? If white wishes to disconnect at the circle, then I could connect, right? Unless the then form would be less efficient?

Slarty: In this case there was no benefit from taking white's (corner group's) liberty playing that connection. Your move is less helpful for the top...in fact if white later peeps at the circle and black, inevitably, connects, black spent two moves to connect (and little else, nothing urgent) while white got a free move or half move at the circle, helping harass the top. The shape black would make is two empty conjoined empty triangles or an empty five. Connected but not efficient. 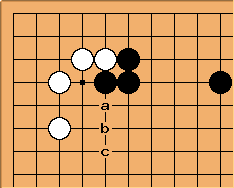 If Black wants to play here, which is best among a, b, c 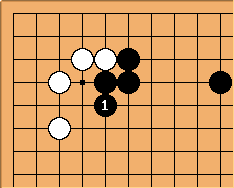 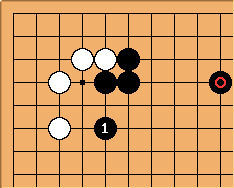 axd: Why still too close?

. Black already has a base, and is relatively secure.

extends from that base without doing much to make it secure. As a rule, then, it is too close. It doesn't accomplish much. 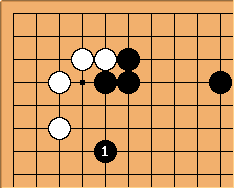 The only time you should make an empty triangle is if it is backed up by solid reading. Here's the only common example I know of. 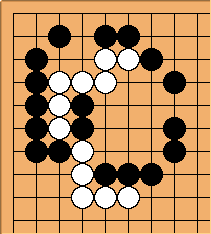 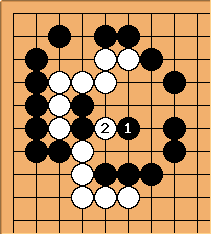 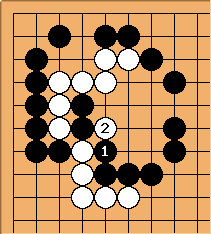 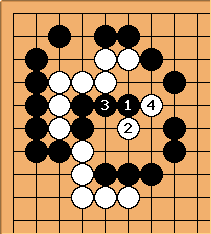 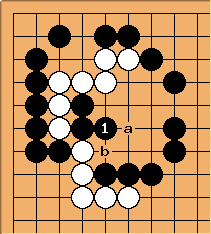 Here the empty triangle is necessary. 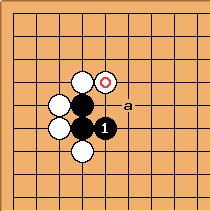 In the presence of

is often the only way to save the two stones, even though it makes an empty triangle. But always read it out, and remember it may be best to do something else instead of saving them!

As an alternative to

, a may be better in some situations.

erikpan: I have heard books refer to a 'good empty triangle'. Is the above an example of this? If not, then what does that term mean?