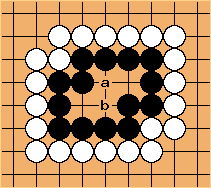 Just like the bent four, this eye shape makes a group alive. The points a and b are miai: Black can always play one of them to make two eyes. Where there are cutting points, the shape may live or die depending on sente.

Just like the bent four, dogleg four is affected by the special properties of the corner although the implications are not quite the same. See twisted four in the corner.

The dogleg four shape is also known as twisted four and zigzag four.

Richard Hunter: I first used the term dogleg four in the British Go Journal #120 (2000) in Nakade and Ishi-no-shita: Part one. I also contrived to include it in my recent book Counting Liberties and Winning Capturing Races even though I didn't use it in the original journal contents. 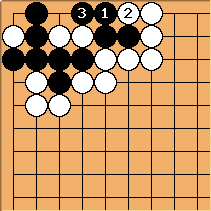 It can describe either a clump of four stones or a four-point eye space. Both are important concepts. The dogleg four or simply the dogleg is an important shape in life and death and also in ishi-no-shita. Part ten of my series in BGJ #129 is called Making Squares and Doglegs