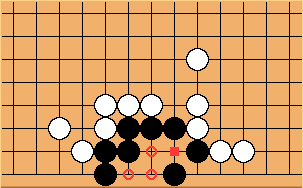 KarlKnechtel: In order to live, Black must either make two eyes out of the circled points, or one out of those and one at the squared point. 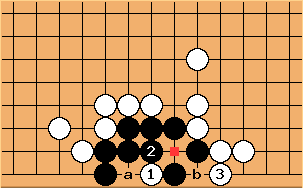 prevents the first way right off the bat.

would mean no eye at the squared point, so Black must play there to have any hope.

threatens to falsify the eye at b, but Black cannot play there because of shortage of liberties.

, the play at b would be possible. Thus

is a dual-purpose move of sorts - well, it accomplishes two things, but both are oriented towards killing the black group, so I don't know if you'd count that. If Black captures the

stone with a, White goes ahead with

at b to falsify the eye.

Let's consider other options for White. If White tenukis,

would save the group, but I think

or b do as well. So maybe

can be made to work. First let's consider 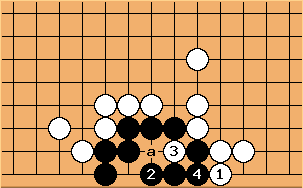 does not work, since

saves the black group (this is Black's only move!). Note that playing

to capture at a is wrong, since then

Now let's look at the other candidate move for White: 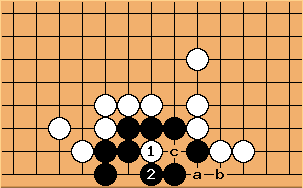 This one doesn't work either - a and b are miai for Black to live. Alternately, White a can be answered at c, removing a tiny bit of aji (after the a-b exchange, White could kill with three local moves in a row). Not worth the one-point sacrifice, probably. Not at my level of play anyway. 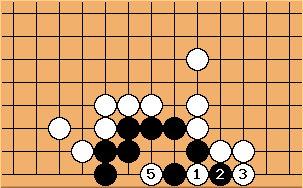 Grech: What if White calls the tune like this? 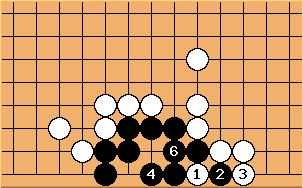 Stefan: Black should answer differently. If he answers the atari at

here, White may capture one stone in ko, but the rest of the black forces survive if Black calmly makes the second eye at 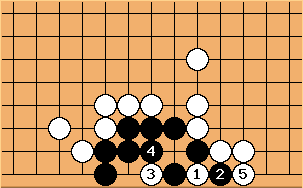 is incorrect, but after that the placement at

still can create a ko. 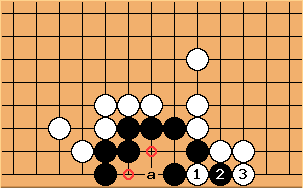 letsgo4it?: I believe this also works. Even if Black plays elsewhere after 1, White can easily finish it off.

fractic: This sequence doesn't work. Black will live by playing at a next, it creates two real eyes at the 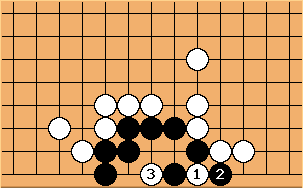 Fragnix?: I believe this also works. The key is to take the vital point 3. Black can't answer anywhere else but 2. However, this solution is suboptimal to the main solution. 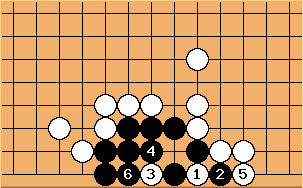 This becomes a ko fight, which is a failure for W since there exists a line which kills outright. The

exchange is bad for W, as the only thing it seems to accomplish is setting up a ko fight around