KarlKnechtel: To "almost-almost fill" (and a better term really is needed) an eyeshape is to fill all but two liberties inside.

Consider a group with a single eyeshape (the "large group"), which is almost-almost-filled with some enemy stones (the "small group"). Assume the large group cannot escape or connect out anywhere. What happens next depends on two basic variables:

Here, the results are:

Then again, all of this ignores the possibility of various ko situations. ^^; 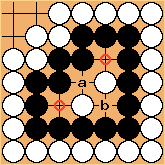 This configuration is seki. The lack of outside liberties actually doesn't matter in any case here. The points a and b are miai in a sense:

Black's threat is worth 6 points: 4 points for eye space, plus 2 for white prisoners, minus the 0 existing value of the seki. White's threat is worth 34 points: 16 for black prisoners, plus 18 for resulting territory. (Not 36 points, as one might normally count, since the circled points aren't Black's territory to begin with.) 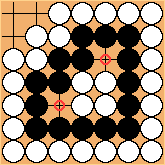 Proof that White threatens to kill: playing at both a and b results in this situation. We have S0 (the white stones make a squared four and a play at either marked point makes a bulky five) and thus R1 - Black dies. 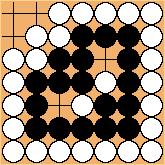 Proof that Black threatens to kill and make eyes - obvious.

When Black responds to White's threat, we have case S1 - the white stones make a triangle (a killing shape) but any extension makes a bent four (in case a) or a twisted four (in case b) - not killing shapes. S1 implies R3 - Black restores the seki. The indicated black plays are the only sufficient answer to the white threat.

When White responds to Black's threat, we again have S1, with identical analysis. Thus White restores the seki. The indicated white plays are the only sufficient answer to the black threat.

The original diagram is indeed seki; with alternating play, it reduces to an obvious seki no matter who starts. However, the position gives either player a ko threat. It is certainly in Black's interest to use this threat if a ko comes up, since doing so also denies a large ko threat to White. White should only use the threat if the ko is important enough, but it's still preferable to using some other 34-point ko threat. (I think.) Because of the huge difference in the threat value, it may be in Black's interest to play the threat immediately, so that White does not get the big threat later.

Of course, White does have a big threat regardless, since any seki offers an unremovable ko threat. However, while the first threat costs nothing and removes a small threat from Black, the second threat costs 8 points outright if Black answers. See Losing Ko Threat.

I found this a little confusing, and after I'd read Killing Shapes and Almost Fill, I came to my own conclusions on "Almost Almost Filling" a group.

First of all, I think the definition of "Almost Almost Filled" (AAF) needs to be modified slightly. An AAF group is one where all inner liberties are shared by both Black and White (invader and invadee). For example: 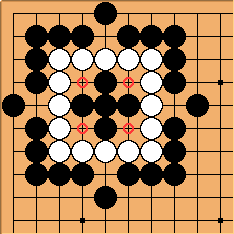 Of course, you'd probably never see this in an actual game, but it helps illustrate the point. The above example has four liberties, all shared by the inner black and white groups. In such an AAF case, you now have three possible options (Damezumari not taken into account).

Of course the names for these are:

The above example illustrates the seki point well. Black has a killing shape, Greek Cross, but the shape is still AAF. Black can create another killing shape, Hana Roku, at any of the circled points. If black does this, however, there are still 2 liberties left and therefore still AAF.

Assume, then, that Black makes the Hana Roku and we're left with a second AAF example. 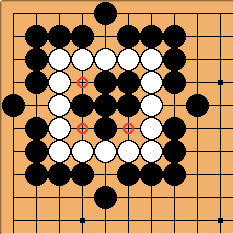 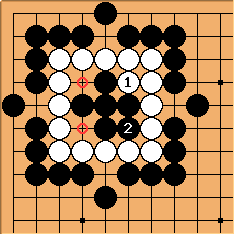 Again this results in seki (in fact, Black does not need to respond in this case).

Therefore we can prove (?) that any shape that's AAF and contains a killing shape is in seki. The only time this is not the case is when Black can move inside, reduce inside liberties to one, and still have a killing shape as below. 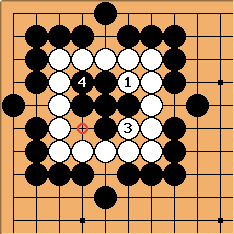