Cut the side you don't want

Because the enemy must normally capture the cutting stones, one should cut the side one doesn't want.

The logic behind the reasoning is the following: after you cut, your opponent can still choose either side.

If Black wants the corner, he should cut at a.

White captures the cutting stone, and Black gets what he wants.

If Black wants the outside, he cuts at

. We assume the ladder works.

In neither of the above variations can White afford not to capture the cutting stone.

In this position it is good for Black to cut at

before turning at a.

is normal since otherwise Black takes the corner.

here: a novice's mistake. White should play b, naturally, to keep the corner. Therefore

here is the wrong side to cut, because the sequence

, White captures is worse than the previous diagram (a One-Two-Three mistake by Black).

This is quite a typical kind of position on the side, with

jumping out past the black stone.

is the correct idea for Black. Probably White has nothing better than

make sure White has no eye shape here. Black can continue to attack White's group.

It would be a bad idea to follow Example 1 in this case, by cutting with

here. White would be very happy with the ponnuki

, and Black cannot even cut White on the left.

In this position you can say that Black wants this outcome, where White decides to capture

(or a) are on the side Black 'wants'. That is, Black's fundamental desire is to cut White's long jump along the third line successfully with 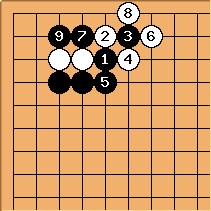 Here, black can decide to play 3 as a way to trade corner for a white to be outside and a pickup of one stone This is recommended to be done when black has the ladder. (There are issues about this, please see other variation to be completely under control in a real game situation).

[1]: Charles: I can remember discussing this kind of point in general with Tim Hunt. Usually there are four variations like A, A', B, B' where it is easy to see that you prefer A to A' and B to B'. On the other hand your opponent will have the choice of giving you a result out of A or B', or out of B or A'. Somehow the decision is between a worse form of a better result, or a better form of a worse result? But actually this is probably just a basic game theory pattern being applied here.