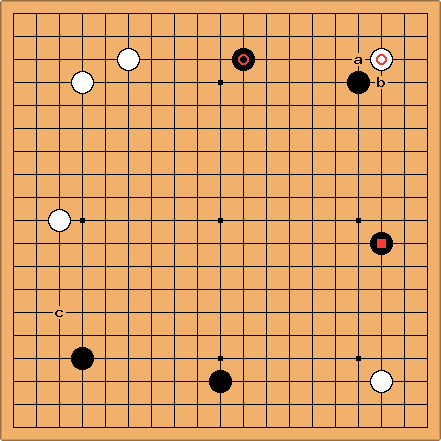 Simplest answer (meaning that it's locally correct, but may not be optimal due to other parts of the board) is b, because the wall you get with Black b, White a, has a 'bigger' spacing from

, compared with the wall you'd get with Black a, White b and

This conforms with the proverb 'Block on the wider side.' - Fhayashi

is larger than a+

If White answers b or a, it is better to have played them before tenukiing.

So in my mind the choice is between: Black b + White c and Black c White b.

If White was willing to play Bb + Wc, then White should just have played White c. 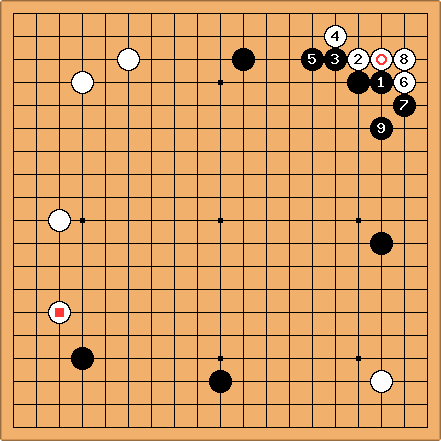 Bill: With both extensions,

above does not look appealing, as it is too close to the extension on the top. The two step hane looks more attractive. 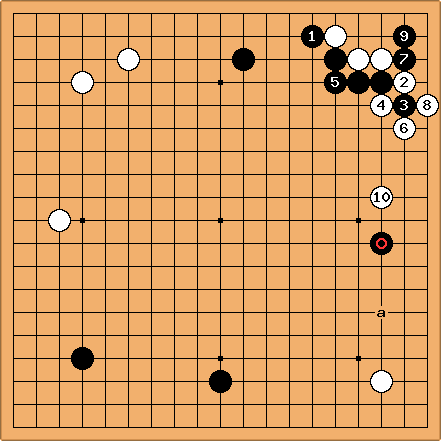 This line reveals a problem with pressing on the right side. The six space extension,

, allows White to extend as far as

As Charles points out below, which side to press on is far from obvious.

BobMcGuigan: This isn't so bad since a black extension to a, above, seems to be sente against the lower right corner, allowing Black to play first in the lower left.

Bill: My point, Bob, is the comparison. When Black has a five space extension, another position where Black plays two step hane, White normally extends one point less. Charles has already shown us the normal continuation when Black presses on the other side in this position. White is more cramped then. 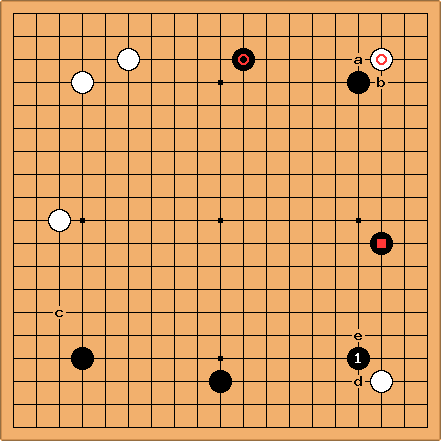 is interesting. Let White have the headache of choosing the direction of play. ;)

Bill: It is an interesting position, and deserves study. However, I think that, since White's crawl is a local sente, the result can be that White gets to choose in both areas, defeating the concept of miai.

tenukis from the corner and tries to create a similar situation in another corner. White will be able to play c, damaging Black's opportunities on the right side of the board, the area that is most developeable for Black. Black could then play d, but White will get c or play a damaging Black on the top as well. After Bb, Wc, Black e expands the Black moyo growing from the top right corner and gives Black an easier game.
The top right hoshi stone is important. Tenuki is not an option here. Blocking at b is the canonical answer.
Such are the thoughts of this 10k player.

Charles The odd thing is that the situation in the upper right is not clear, from the point of view of pro play: Black would block on the

side sometimes, and the

side other times. So if there is a definitely correct way to play, it's not a local matter.

Velobici: Charles, could you explain your response more fully. At my level of play, it seems clear that blocking at b is the only way to go.

Charles I'll start a separate discussion for this point at Block on the wider side / Discussion.

Vesa The first "expected" variation shows only the easiest 3-3 invasion joseki. Black can also choose to extend solidly with

or play keima. Of course, those alternative josekis don't give a definitive answer to which side to block...

unkx80: It turns out that I have set a problem that opens up a number of interesting discussions which I have not really thought of myself. I will get back when I have more time. =) 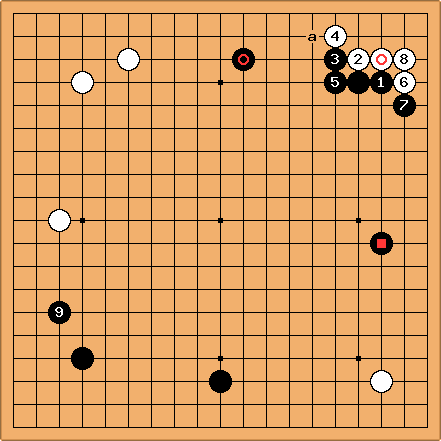 should be left of

. That threatens cutting of the extension and as such is more sente than your line.

Timm: Thanks for pointing it out, you're completely right. My intuition was that

would work rather well together. Here are my tries.

should play at a to seal white in in sente, before playing elsewhere. 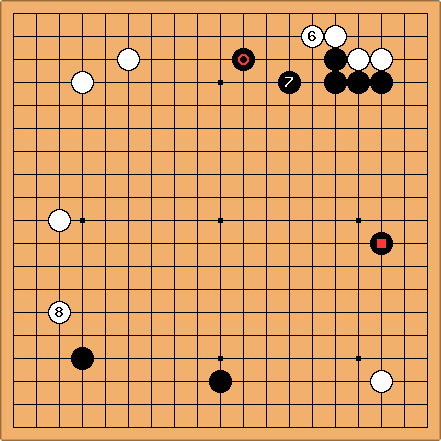 Isn't this good for Black ?

Dieter: white has sente to play in the lower left.

Timm: Well, in all sequences proposed so far White manages to keep sente and play in the lower left. What I thought was that it may be interesting even as compared with the 'standard' 3-3 joseki because the corner can still be reduced and the high

stone may have a bit more influence  or is it too thin for that? Anyway, being able to force White into an L+2 group and have strong groups on both sides, as after the 'standard' joseki, is probably too good...

Dieter: It's not a question of being thin, rather aimless. If White now approaches with

(I put it there to make it apparent), all her stones seem to be working well. Top and left are building, top right is a successful invasion, lower right is stable on its own. Perhaps overall White is a bit too low, but Black is definitely in a worse position. The purpose of

is unclear, the top right is wide but can be invaded or reduced at will and the bottom is under pressure after White's sente at

Timm: Thanks for clarifying the way you view the situation. I probably judge too much in terms of what I think I'll be able to achieve instead of what are my stones already doing, which is much less subjective. 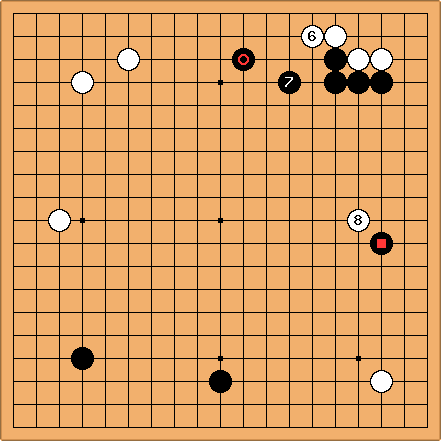 Slarty: The marked black stones are in poor positions. The center looks nice, and white probably needs to play the easy reduction left by

immediately, lest black enclose territory with a large knight's move. But after this, white will be happy with the count, especially the territory part of the count, which includes komi. Furthermore:

the corner looks as awkward for white as black's outside, but actually it has ample space and has made a comfortable life. Black cannot hane in sente as shown. If he exchanges 3 for 1 to prvent white 3, white has seven points and cutting at the knight's move becomes viable. 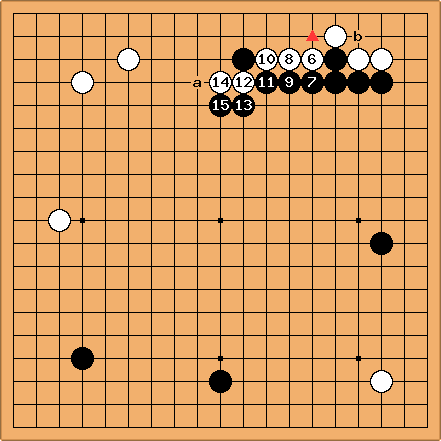 seems quite problematic... I must admit I can't find a good way of handling the cut. :/ Maybe like this ?

is too slow and should be at

directly, or even cut the Side you don't want.

Timm: So you think this result is terrible ?

is interesting to know.

Dieter: well, I think White shouldn't play this way, and neither should Black. 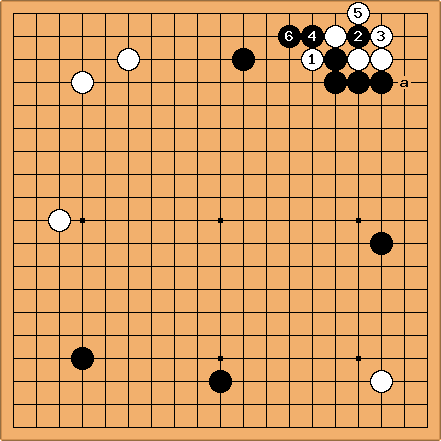 Firstly, I prefer this. Later a is sente for Black, making the corner a heavy ko for White if unanswered.

Timm: I think this result is quite similar in essence to the one after the 'standard' joseki in that the top side is settled. 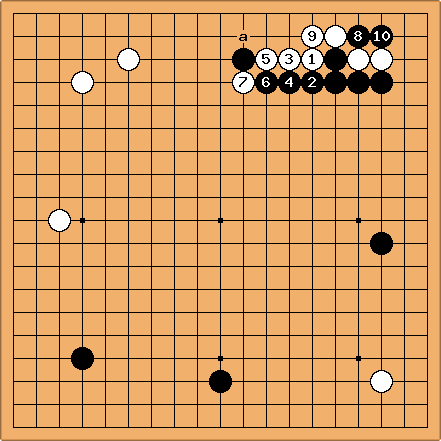 Secondly, Black can still cut at

when White cuts at

. He gets the corner and White must now deal with the nasty aji at a. The bigger White's top becomes after the cut at

Timm: Right, I didn't think that I could play on this side and have this aji. I totally agree that taking the corner isn't so interesting. 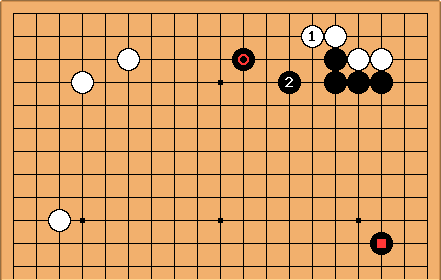 here and assuming Black's gote at

is somewhat aimless, as explained. 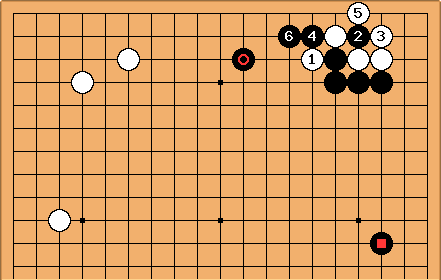 This variation, after White's mistake at

work together with all other Black stones to carve out a deep moyo, while White's territory is quite a few points less. White is dearly enclosed in a small corner.

The difference witht he previous diagram is big, if you imagine the end state of the territories, provided all groups remain stable. Purely in terms of stability of groups, the difference is indeed not that big. In professional terms the difference is unacceptable, in our terms White has more work to do. But in our terms, studying the fuseki is almost pointless.

Timm: Sorry Dieter I should have been clearer. By "standard" joseki (which is quite a pointless expression, I reckon) I meant the basic 33 invasion pattern as shown in the second diagram of this page (not MY second diagram). Because of

white hasn't extended on the side so Black's likely to force her into an L+2 group and settle his top group in the process.

only for their influence. I played with only one purpose in mind.

I think studying fuseki is interesting and as important as the rest. But studying it in isolation isn't efficient because you have to consider tactics (our exchange proves it) and invasion perspectives. Anyway, I feel like I've learnt a bit today. ;-)