Doug Ridgway: This proverb doesn't make sense to me. If either cut will work, and the opponent can only protect against one of them, then regardless of which side I want, it's the opponent who gets to choose which side I will get. Wouldn't it be better to cut on the side that the opponent will end up giving me anyway? That way, the opponent doesn't get to capture a stone, which is better for them than for me.

exchange is obviously bad for black. (I hope this isn't Lying With Tewari.)

Charles: You have to look at the line where White resists Black's chosen plan:

Here White should be in trouble, because the corner is just about to die. White denies Black the corner, indeed; but the cost is too high even if the ladder for Black to capture

Charles: This is (perhaps obsolescent) joseki, but only if Black has a good ladder at a to capture:

If it's joseki, then it's OK, so let's look at joseki.

. Kogo states that Black needs the ladder even before attaching at 3. With no ladder, the best he can do is cut at a and take the corner, but the result favors White (according to Kogo). With the ladder, he cuts at b and takes the outside. What I find interesting is that the paths with White connecting don't even appear -- as far as the joseki book is concerned, White will always capture, never connect.[2] (If I did the search right.)

Gobase can find only one of these joseki actually played: the inside cut followed by the ladder, and in only one game. Most popular is Black a White c Black d, and Black a White b has also been played. Maybe this is an example of there's no such thing as joseki?.

Andre Engels: I am a bit at a loss at what you're saying. What do you mean by 'these joseki' when you say that Gobase can only find one of these joseki actually being played? Anyway, my own joseki database (consisting of MasterGo's database plus games downloaded from the Internet plus games typed in by me from magazines, totalling slightly over 20,000), I find the following variations: 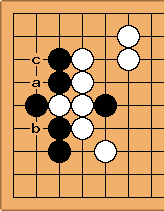 Here's another example, a position which occurred in one of my games. Suppose White decides to cut: a or b? I think Black will connect on the bottom, regardless of which side White starts on: it's easier to live, and there's more White territory to threaten. So White should cut at a, as this is the side that Black will give up. White a, Black b, White c is what I would expect. Does this make sense?

Charles: Given your hypothesis about Black's intention, yes, it makes sense.

togo: The shape is secondary here, capturing the cutting stone in these cases gives an additional move.

JoelR: No, in every variation of example 1 above (White connects or White captures), Black ends in gote.

[2]: Charles: This sort of lacuna in joseki books, where they don't explain or indicate the most fundamental points, is very typical: too much of the wrong type of data for some users.