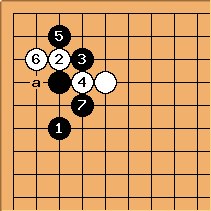 at a, Black can play here, especially if the ladder is good for him.

is a low, conservative play to eliminate the potential along the left side (often to avoid allowing White to play an avalanche). The cut at

is one way to settle the shape here. Playing

and leaving more aji behind seems inconsistent with Black's play up to now. If Black is looking for more out the upper left, he will not choose

Herman: This is a good argument. Because of the importance of the ladder, I usually only play this sequence when the game started with a diagonal fuseki. In those cases, it can be very useful because black can use a move at b or c in the next diagram to limit white's potential along the top. 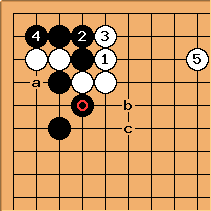 Kogo's joseki dictionary gives this as the standard sequence.

Bill: I checked, and it doesn't. It says that

is possible. In fact, Black has bad aji. (Suzuki and Kitani's SmallJosekiDictionary gives B a instead of

.) Also, in Kono Te Goyoshin (Watch out for these plays), 4-4 vol., Go Seigen says that this is unsatisfactory for White. More

Considering that exactly this sequence is used when the

stone is at a, I can't help but feel that this must be bad for White. Having an extra stone on the fourth line here should make a huge difference.

Alex Weldon: I think this is fine for both sides, whether

is as shown here or at a. It's true Black has a bit more influence with the stone on the fourth line (I would not call it a "huge" difference by any means), but there is a whole lot more aji in his position due to the atari at a, not to mention many more ko threats for White than with

at a. I think the difference between the two positions is a subtle one and which is better for Black depends on the surroundings. 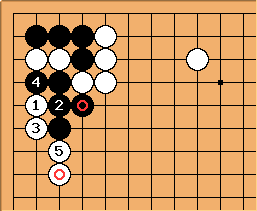 , which gives Black an empty triangle.

dnerra: I don't even think

is necessary for this sequence. I have never seen the move

in the original sequence, and given this aji here, I highly doubt it can be joseki.

Herman: The aji here is really only valid in yose, since it is gote. Given that black already had sente after the original sequence, no player in his right mind would give up sente again to play this until the endgame. I'm not sure this sequence is joseki at all. It is mentioned in Kogo's and I have also seen it in A Compendium Of Trick Plays. The annoying thing being that although this is mentioned as a trick play, the correct answer against this sequence is not really given.

Bill: The point is that

does not, as a rule, make a big difference in Black's favor. The proverb says, Do not approach strong stones. The aji here makes these Black stones approachable from the left side (again, as a rule). This can be a factor in the opening. And, as dnerra points out below,

does not have to be so close to have an effect. 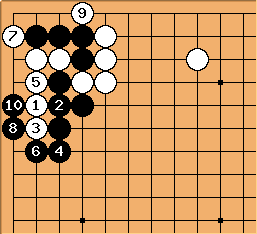 Bill: If White connects with 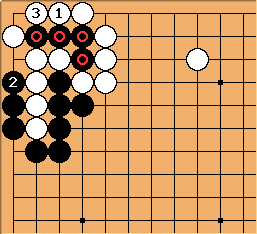 Bill: Black can happily give up the corner (as a rule), since White must capture all Black's stones (semedori). 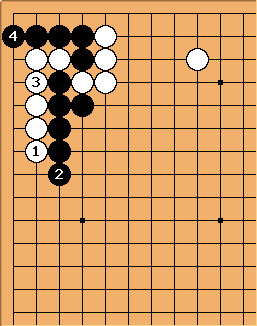 , retaining the corner while White has three stones on the second line.

Or he could give up the corner with

and force White into a low position on the left side. 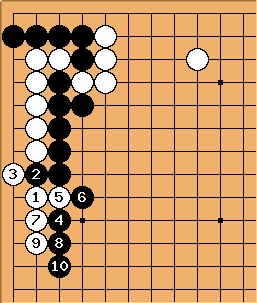 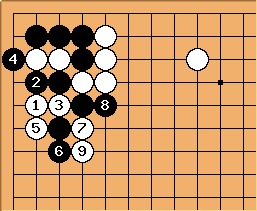 Bill: Or Black could simply reply with

dnerra: Well I didnt say I wanted to play this sequence right away. Just add any stone for white somewhere on the left, a working ladder, and all of the variations you give yield a pretty catastrophic result for Black. If that isn't bad aji, I don't know what it is :) 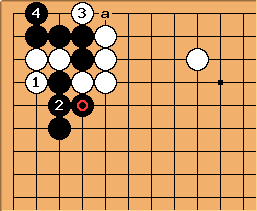 is a likely large yose sequence, which is White's sente. Whereas if

This makes a difference of about five points on the top.

would have to gain more than that to make it preferable. 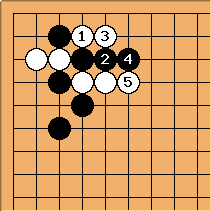 White has the option to fight like this, but her corner is not completely alive yet (it is ko), and her central stones are quite weak.

Does anyone know of any better options for White?

Charles Well, this isn't a pro variation, that I can see. Being in Kogo may not mean so much.

ndkrempel: Please refer to Alexandre Dinerchtein and co.'s GOAMA 1, where it is stated that the best way for both sides is: 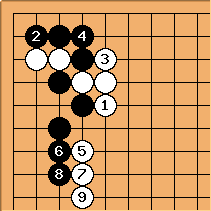 This result is slightly favourable for white. Other variations are also given there (in particular why black shouldn't hane in response to white 1). Interestingly, the Kogo sequence is listed as bad for white as black's corner is bigger than joseki.

xela: I have trouble using this in real games, because it's gote for white and it seems to me that black can easily neutralise white's thickness.

Bill: White's thickness is too extensive to be easily neutralized. 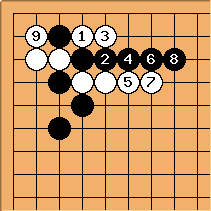 Bill: In the same book Go Seigen recommends the line of play in this and the next diagram for White, to live in the corner. 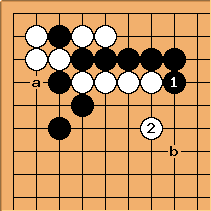 Bill: Note that White avoids playing at a, to leave aji behind.

xela: A Compendium Of Trick Plays says that black can get a good result by playing at b next, therefore Dinerstein's (GoAma) variation (above) is the correct way for white. Back