After the wonderful responses I got from the my post at BQM20, I decided to post again. The following is a position from one of my games, I was playing Black.

I seemed to make a critical error in the lower left corner and it was a major turning point in the game. I went on to lose by 11.5 points, the cost of the mistake locally being easily far more then that. I have included the sequences leading up to the turning point, as well as the immediate aftermath, and as much of my thinking at the time as possible.

I am wondering where exactly I screwed up, and if I took sufficient measures to stop the bleeding after it becomes obvious that something has gone seriously wrong in the lower left corner, or maybe even if I my play leading up to the turning point was faulty on a whole board scale. Any and all comments will be greatly appreciated. Thanks. :-) --BlueWyvern
Side note: After more consideration of this game, I think I want to get the whole thing reviewed, but I feel bad sending it in to the Go Teaching Ladder given that the wonderful people here at the Senseis Library have already made some very helpful comments on it, and I wouldn't want to waste anyone's time by asking them to provide me with redundant advice. If anyone here finds this game interesting enough that they might want to review the whole thing, could you drop me an e-mail? My email address is on my home page. :-)

I think this is an interesting position and there is a lot of thoughtful material on this page. At the same time I think we concentrate to a large degree on the actual course of the game. I invite everyone to also take a closer look at the starting position and see if we can determine what Black's overall plan/strategy should be here. Also let's consider what this example tells us in relation to planning the game. --DaveSigaty 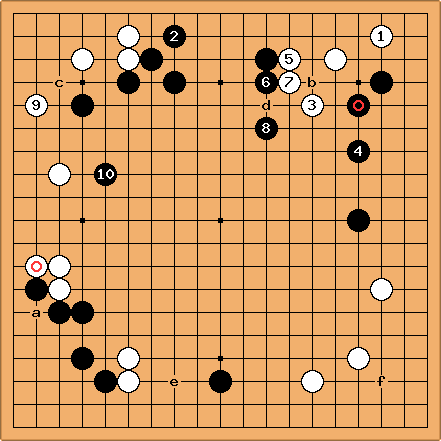 was played, I thought the threat of a cut at a was not sente, because I guessed it could only be worth a couple of points; so I decided to shift my attention to strengthening my position in the upper right with

White slid into the corner with

, preventing White from jumping in and taking over the upper side.

White then got out with

to strengthen the right side which seemed to me to be performing an important function by keeping the fairly large white enclosure in the lower right corner in check - which in the end turned out to be the lion's share of White's territory.

seemed the natural follow up because it kept White from pressing my position on top down, and it aimed at b. When White played

seemed the natural move, keeping White's now fairly stable corner group from jumping out and gaining influence, as well as expanding my moyo on the upper side. White then shifted to the left by trying to connect with

Rather than attempt to cut at c, I played the cap with

, in accord with my strategy of denying White influence, as well as building my framework on the top.

By my best estimation (the estimation of an approximately 9 kyu AGA amateur) White is maybe a few points ahead in settled territory, largly thanks to Black's position on the right being open at the bottom); however Black's positions seem much more influential and appear to have much more potential. And on the bottom, where Black is weak on influence, White still has to worry about the lone stone under the center hoshi point which has plenty of space to live and has a lot of reduction potential. At this point White shifts attention to the lower left corner. Side note, to me, I cannot find fault with the way I played the fuseki preceding where the numbers start, although I'm sure there probably is. If anything jumps out at you, please tell me. :-)

If you accept the advice of a humble EGF 1 kyu, then let me give some comments --DieterVerhofstadt
A play at a is indeed best saved for the endgame, but once the endgame comes, it's big. Your tenuki to

is a good one.

is a strange move, and has a single purpose: defending territory. The natural reinforcement to this group is at d, but in this case a play at b is best, shutting White in.

Allow me to defend my move of

would have been much better at

itself. Black's development at this stage is much better, creating some kind of framework in the center. Before playing at

I would have accepted the c-invitation, because that threatens to kill the corner.

Once the upper right is more or less settled, the important area is the lower left quarter of the board, where White has two stones and Black one, which are in each other's sphere of influence. Both would very much like to jump out and/or create a base for eye shape at e. White's subsequent ikken tobi is urgent and (thus) good.

is also hard to criticize.

is a terrible mistake in direction: Black should play at b without fail.

is quiet, but not bad.

are moves one does not want to make. White is strengthening Black a lot for just a little bit of space.

is especially bad: White f would work much better.

is a strange move, for Black playing c before

seems like a good idea - Black should be interested to know what aji White is leaving for him, and furthermore it's a big move - you don't want to be so busy fighting all the time that in some strange way White gets the time to take it... 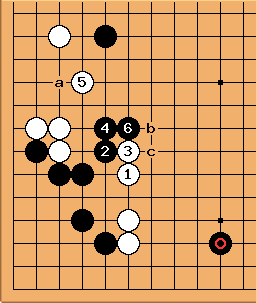 White jumps up with

and I respond with

, thinking White really can't afford to let me play at

. I figured the push was forced, and the influence White's wall was building up did not bother me much because of

, so I continued to push gleefully upwards, thinking of connecting to my moyo at the top and invading at a.

. I eagerly play the bend with

, thinking it would be disaster for White to play the hane at b because the cut at c would be very promising because of

. I looked forward to pushing White along for a little while and building up a wall of influence facing my framework on the upper side. Then disaster struck.

These look good for Black. I think

is in the wrong direction: White should do something more with the stones she just played - probably capping the single black stone would be most promising.

is good shape locally, and globally in the right direction because it works well in developing Black's framework. -- Andre Engels 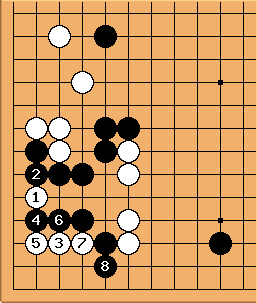 and I automatically respond with

and I do a double-take. I feel a little worried at this point but not overly panicked as the sequence continues up to 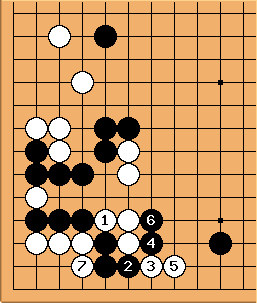 With the cut of

. When I am blocked at

, I think the cut at

could give me a chance, but immediately after I played

, I knew I had screwed up somewhere and figured 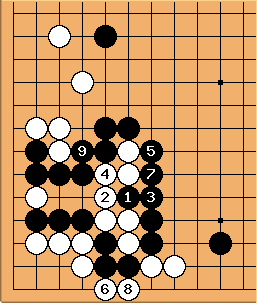 I tried my best to make the most of the situation in attempt to compensate for the devastation of an enormous chunk of (what I thought was) my secure territory. I played the sequence up to

to build a wall of influence which I hoped I could use to aid me in a fight over the lower right quadrant, where White has the most potential for growth. I thought I would end in sente, but luckily I caught the connection at

. A cut there would have nailed the coffin shut on my defeat and I probably would have resigned at that point. 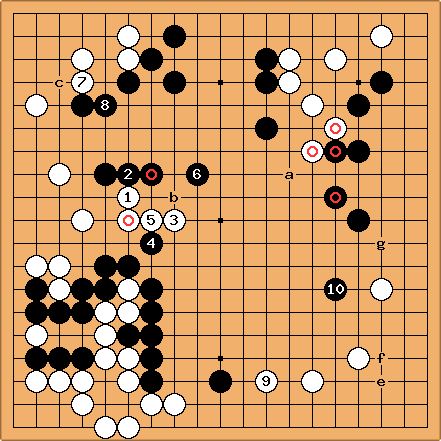 Here is the general aftermath. Now that White has sente, he first plays the sequence of four

stones in the upper right, threatening to push through the one-point jump. This doesn't seem like much of a threat, so instead of closing, I block her from the center, which suddenly seems very important due to the turn of events in the lower left. White then plays the sequence of the two

stones on the left. (Forgive me for not splitting up the board.) Now comes a forcing move of

I was pleased when White jumped to

, allowing me to connect my one-eyed group on the left with my wall in sente, giving it a better chance of survival. In retrospect

seemed like a waste of sente, but I'm not sure what I should have played instead. White plays a forcing move at

followed by the extension at

, pretty much eliminating my possibility for making an eye along the edge. Perhaps I should have played

here. The best move I think I have at this point is the cap at

. A white play here would expand the corner to mammoth proportions.

moves in the upper right were not well done by Black. You are right that closing White off from the center was important, but you didn't do that. You should have played somewhere around a for that - that looks much more useful than the stones you played.

at B is doubtful too. Your territory is not above, but to the right of these stones. Immediately playing B to try to stop White coming in that direction seems better. It might not work though, in which case playing at

yourself is best (makes a a huge move, by the way). Don't answer your opponent just because he is threatening, but check what (and how much!) he is threatening first. If you're pleased with White jumping to

, I think it shows bad judgement...

is a mistake: White should make the bamboo joint at b instead. You say you don't know where else you should have played

. I think White gives the answer: at c. Black c is sente, and by answering

you are allowing White to get rid of it in sente. And this move is huge. I think that by allowing this move, you give away as much as you would by passing at this stage of the game... By the way, other big moves are an invasion at e or f, or making territory while at the same time making territory at g (playing at 9 has the same idea, but g looks bigger).

is a serious case of wrong direction. In the first place, g is simply (a lot) bigger. In the second place, if you are behind (which you seem to be), the better course to take is to fight. How? Invade at f now. There's a good chance that you will live. And if you do, suddenly the game has turned in your favour. If you die, you will probably lose the game, but you were on your way to doing that anyway, so that is not a big problem. You should try something on the left side too, by the way. In the game, White seems to have connected there rather easily. There's a lot of aji (and bad white shape) left there - use it. 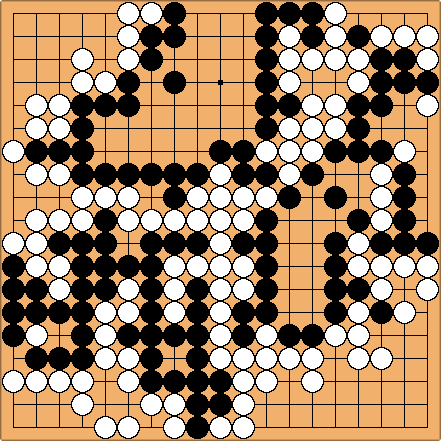 Here is the final board position, in case you are curious. White has five prisoners, and Black one, not counting dead stones. White has 80.5 points (komi of .5, White had a stronger rating), and Black 69. A sparkling example of why it sucks when your opponent has all four corners.