Sort of a side question on BQM21, with the sixth move I was faced with this rather bizarre pincer. --BlueWyvern 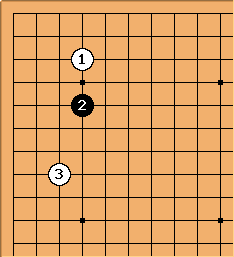 This seems a little weird, and perhaps a bad play, but I don't know. It certainly confused me. You can find the context in the upper left corner of BQM21 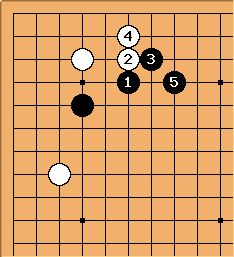 This is how I answered it, then White played elsewhere. How is this? White's pincer stone seems a bit of a slack move now, not doing anything. Am I just not seeing it, or is there a way White could have played better with this pincer?

BillSpight: Black came out pretty well in this exchange. 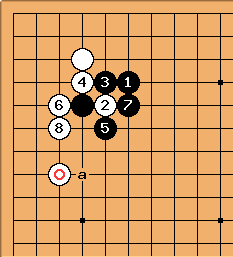 The proverb says to strike at the waist of a keima, and White 2 is the vital point. White connects easily and Black is a bit over-concentrated.

This is question on the merits and drawbacks of a high or low pincer. I consider this to be a matter for professionals. White pincers and thus prevents Black from extending along the left. Black can now press against the corner stone and with the acquired influence start to attack the pincer stone. It being low maybe makes it less severe against the pincered stone, and also less interesting an object for attack. But this is where my knowledge stops and guessing takes over.

DaveSigaty: Actually I think that even we amateurs can fruitfully consider the matter of High Vs Low Pincer so shall we?

With regards to the comment above me, I thought this an odd move because it seemed to lack any kind of severity whatsoever. My thinking on this is: the looser the pincer, the less severe it is, and a pincer on a different line is less severe. A high approach to White's komoku seems more intent on gaining influence and pushing down on White's position then expanding down the side. White's loose low pincer threatens to undercut the approach stone, but not as severly as a tighter pincer would, and given Black's initial approach, it seems to me like something he is not entirely caring about anyways. Although I must admit, I am still a fairly weak player, so I am probably way off base here. --BlueWyvern

Yes, I think you are - for starters, the position in the lower left is missing, and that is what usually dictates the choice of pincer. High pincers (that can easily run into the center) are more often used when the stones in the lower left corner (in this case, not in general ;) are black and low pincers (that make territory along the side) are usually used when they are an extension of the position in the lower left. Also, 'severity' is not a goal in itself - it's only a point if you want to settle the situation quickly so you can get to an urgent point. If there are no urgent points, you might be better off with a less severe move, since it tends to leave more options open later...