DaveSigaty: A major issue in this game is who plays first on the lower side and where? In the game White played first - an ikkentobi straight up. Was this the best choice for White? What would have happened if Black had played first? 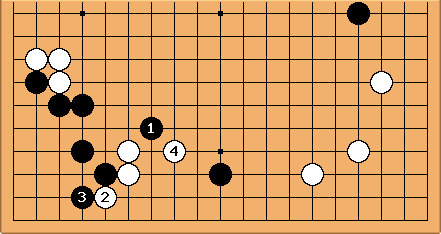 Black wants to attack the two white stones from the right, driving them away from Black's weak stone and into his thickness. Trying the direct approach with 1, however, seems to have a hole in it when White springs the combo of 2 and 4. So what should Black do instead? 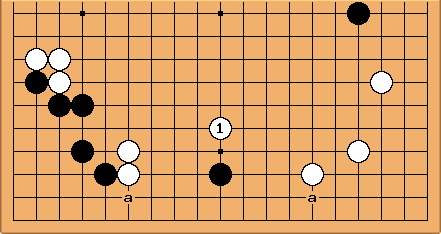 DaveSigaty: I am most interested in whether White can get away with the capping play at 1. If White can force Black to live along the edge, then not only will she save her two stones but she is likely to get the opportunity to play around both of the points marked a as well (?). The one on the right will help secure White's corner while the one on the left will undermine Black's corner. This would be an outstanding result for White despite the fact that Black would live along the side. So how should Black fight back?

I think that the exchange 2 for 3 on the upper diagram is very good for Black. He can be content. The corner is safe, ikken tobi is easy and attacks. All his groups are safe and as yet White is not connected.

BillSpight: My original feeling was that the bottom is urgent. I think that Dave's boshi is severe. (As Black I don't try to live on the side, however. Might as well give up!) 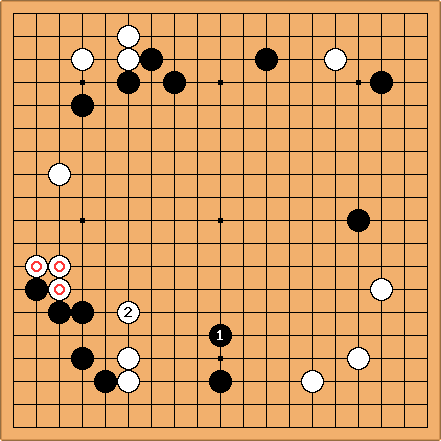 The trouble with an ikken tobi is that White can simply run out, too, and has friends nearby (marked). Also, Black's corner has some bad aji, and Black can't feel good about letting it get hemmed in.

What about a Black boshi? 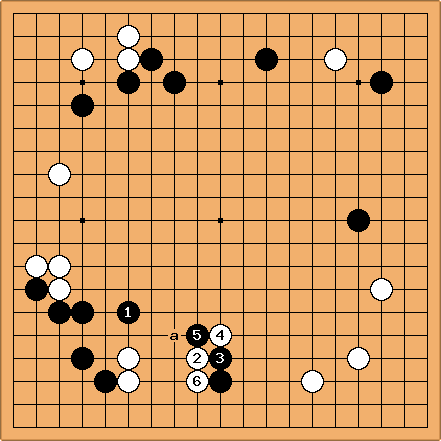 The general idea is for both sides to run out, and for Black reduce White's potential on the right in the process. White a - Black 4 would play into Black's hands. So the play might go as in the diagram, with a difficult fight.