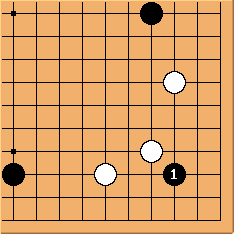 is not the only entry point in this formation but it is one of the basic starting points. What happens next? Should Black start elsewhere instead?

See 364473Enclosure33Invasion for a summary of the below discussion. 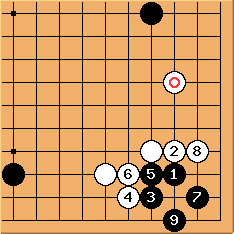 on the wider side is perhaps natural.

will allow Black to live.

is one of a variety of counters but there is no way to prevent Black from living if he is willing to do so on a small scale in gote. 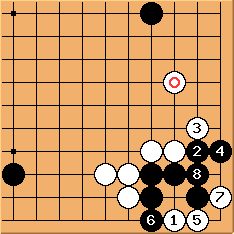 This is perhaps White's strongest attempt to prevent Black from living. However, Black forms a seki with no problems. 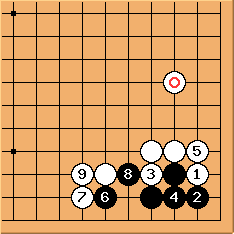 BramGo: White should play from the other side in my opinion. But this may depend on the outside as well,

is a bit aggressive. 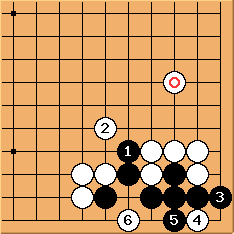 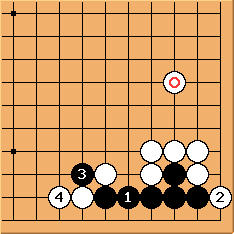 BramGo: As I said, the hane is a bit agressive though. Black can cut and fight when he is strong on the lower side. 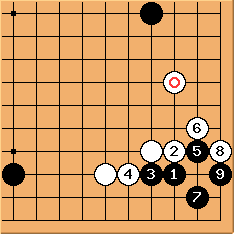 is another very common idea for invading under a small knight enclosure. It is a more aggressive approach than just seeking a small life. Black is happy either to live on a larger scale via the ko or take a suitable profit elsewhere in exchange for the corner.

In this particular case where White has played the large and small knight combination, White has a problem trying to eliminate the corner aji. Black need not be in a rush to invade because there is no efficient follow-up play for White here that will prevent an invasion. Note as well that in all the variations above the

stone is not well placed. 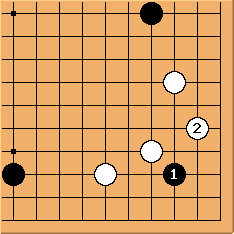 Pokaali 16k: How can Black make life after 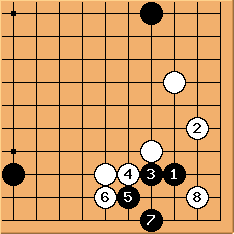 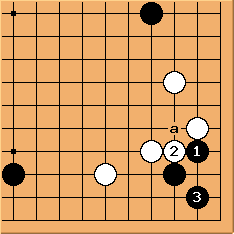 JanRamon: Black 1 is one possibility. If white 2, 3 reverts to the ko variation. If white does not play at 2 (or A), black can play at A.